How to retain 90% of everything you learn 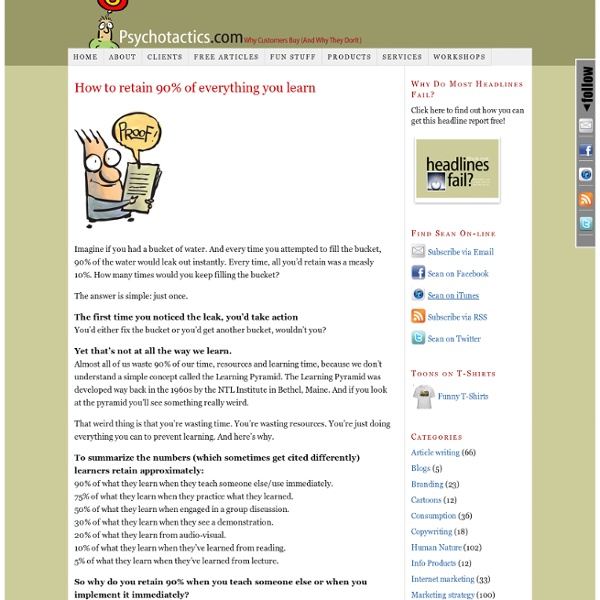 100 Amazing How-To Sites to Teach Yourself Anything Posted by Site Administrator in Online Learning May 7th, 2009 Learning new skills and expanding your knowledge doesn’t have to cost you an arm and a leg. There are loads of free resources on the Web that can help you find instructional videos, tutorials and classes to learn a wide variety of skills from fixing basic car problems to speaking another language. With 100 sites to choose from, you’re bound to find something here that will help you learn just about anything you could want. General Tutorials These sites offer a wide range of tutorials and videos. How To Learn (Absolutely Anything and Everything) A while back I mentioned, in passing, that I want to tour Route 66 in the US next year on a bicycle. I’ve never done a long bike tour, but ever since mentioning it I’ve had it in the back of my mind. The first thing I know is that it’s going to be difficult. :) But I was more worried about the bike.

The trick to multitasking better If there’s one thing we all have in common, it’s doing more with less—and that has turned everybody into a multitasker. But doing too many things at once can leave us doing nothing particularly well, as researchers have proven and millions of ordinary people have discovered on their own. Robert Sutton, management professor at Stanford University and co-author of Scaling Up Excellence: Getting to More Without Settling for Less, calls this “the problem of more.”

How to Extract DNA from Anything Living First, you need to find something that contains DNA. Since DNA is the blueprint for life, everything living contains DNA. For this experiment, we like to use green split peas. But there are lots of other DNA sources too, such as: Spinach Chicken liver Strawberries Broccoli

How to Increase Mind Power It's hard to make up your bed while you're still sleeping in it. Hard to make up your mind for the same reason. ~ Robert Brault Indeed! The fact that most of us use only about a seventh of our total mental faculties is because we never bother to awaken or activate the remaining six parts! The chief bane of the staggering majority of humanity is complacency - we never bother to make extra efforts to better our lot unless absolutely necessary. For the same reason, we allow a good part of our minds to stay asleep during the course of our mundane lives and it is a humiliatingly insignificant minority that recognizes the true potential of the human mind and values it, making efforts to polish the surface regularly so that the shiny metal underneath gets to surface in all its creative brilliance and intellectual grandeur!

Learn Something New Every Day Most of us have one or two areas of knowledge that we strive to know very well — things related to our jobs, of course, and maybe a hobby or two. But while it’s important to develop a deep understanding of the things that matter most to us, it is just as important to develop a broad understanding of the world in general. A lot of unfortunate people think that learning for the sake of learning is something for schoolchildren, and maybe college students. All the things there are to learn and know that don’t impact directly on their immediate lives they dismiss as “trivia”. Out in the “real world”, they think, there’s no time for such frivolities — there’s serious work to get done! 19 Hard Things You Need To Do To Be Successful « The Luthas Corporation My goal is for all of us to be happy, successful and grow together.. you can find much more daily motivational material like this here: My InstaGram page: @DameLuthas Twitter: @DameLuthas Enjoy the list below ;-) You have to do the hard things.

Science vs. Religion: 50 Famous Academics on God by Maria Popova Decoding divinity, or what the great intellectuals of our time have to say about science and spirituality. The dialogue between science and religion is among humanity’s oldest and most controversial, drawing each era’s greatest thinkers into some of history’s most heated debates. We’ve previously looked at a BBC documentary on the complex relationship between the two and 7 essential books on the psychology of faith. Today, we turn to a fantastic mashup of 50 famous academics — including Brain Pickings favorites Carl Sagan, Stephen Hawking, Oliver Sacks, Steven Pinker and Daniel Dennett — talking about spirituality and science, created by Jonathan Pararajasingham.

The 37 Best Websites To Learn Something New — Personal Growth Forget overpriced schools, long days in a crowded classroom, and pitifully poor results. These websites and apps cover myriads of science, art, and technology topics. They will teach you practically anything, from making hummus to building apps in node.js, most of them for free. There is absolutely no excuse for you not to master a new skill, expand your knowledge, or eventually boost your career. How to Learn a Little Every Day Something can be said for knowing a little bit about a lot of things. Being an everyman or everywoman can propel you to a more efficient, productive and fulfilled personal and professional life. Whether it’s keeping up on current events, a new hobby or interest or simply any new idea, taking a small amount of time to learn something every day is a great way to add to your personal knowledgebase.

How to Tell if Someone's Lying Steve Van Aperen has worked on more than 50 serial-killer investigations as a behavioral interviewer, and trains people across the globe in detecting deception. He says there are three surefire ways to tell if someone is lying. WATCH: How 'SVU' Made Danny Pino a Better Parent The first thing to look for is, "Are they answering the question, or are they deliberately being evasive or dismissive?"

Several Lessons to Be Learned from the Finnish School System The Internet has been abuzz since the release of “What Makes Finnish Kids So Smart?” by Ellen Gamerman of the Wall Street Journal. In essence, Finland teens are able to deliver the goods on international tests and now American educators have begun researching the Finnish system to see what tidbits they can glean. Want to Learn Web Design? 7 YouTube Channels to Get You Started YouTube has channels that cover every conceivable topic. Whether you want to watch the latest movie releases or learn a new trade or skill, you can be sure to find what you need on the web’s biggest video library. As blogs continue in their popularity, one skill that a lot of people are interested in is web design.