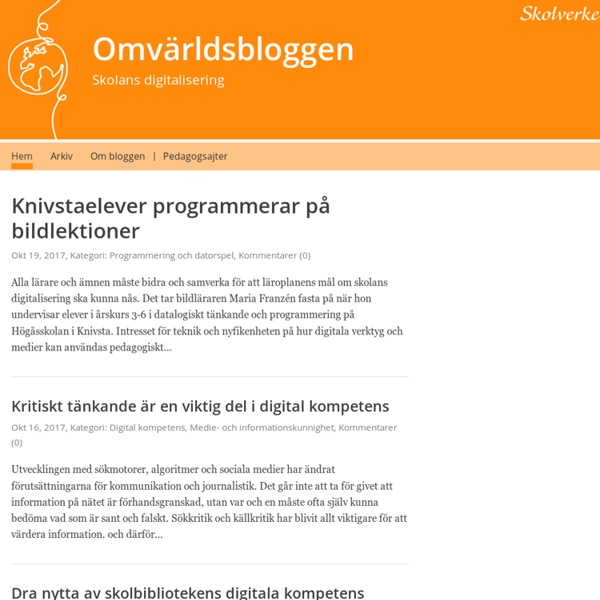 The Critical Thinking Skills Cheatsheet [Infographic] Critical thinking skills truly matter in learning. Why? Because they are life skills we use every day of our lives. 8 Questions Teachers Should Ask When Giving Assessments In a blog post earlier this year, Justin Tarte offered 10 questions to ask yourself before giving an assessment. In a four part blog series, we identified five characteristics of quality educational assessments. In my blog post here I thought it would be interesting to do a mash-up of the two and provide those questions I’d ask myself about prior to giving an assessment. 1. What’s the purpose of the assessment?

Standards for the 21st-Century Learner Skip to main content ALA User Menu A Division of the American Library Association You are at: ALA.org » AASL » Learning Standards & Program Guidelines » Standards for the 21st-Century Learner Four scientific theories that were proven wrong Nothing enforces humility more rigorously than science, the powerful idea that being wrong is not something to be ashamed about, but rather something to be openly embraced, as it has the potential to open up new doors to progression and innovation in the sciences. When scientists are wrong, they are motivated to change their views when some new evidence comes along that contradicts these views. This humble disposition tends to go against the grain of human nature, which assigns a high value to being right all the time and entails that being wrong is the worst of all outcomes and should therefore be avoided at all costs. Below are four prominent examples of scientific theories that were once widely accepted and held in high regard, and which were eventually proven wrong in the light of new scientific evidence, but which paved the way to advances in science which would never have been possible otherwise.

Blue Feed, Red Feed What is this? Recent posts from sources where the majority of shared articles aligned “very liberal” (blue, on the left) and “very conservative” (red, on the right) in a large Facebook study. In 2015, the journal Science published a research paper by Facebook scientists (Bakshy, Eytan; Messing, Solomon; Adamic, Lada, 2015, “Replication Data for: Exposure to Ideologically Diverse News and Opinion on Facebook”, Harvard Dataverse, V2) which looked at how a subset of the social network’s users reacted to the news appearing in their feeds.

Münchausen by internet: the sickness bloggers who fake it online How would you fake cancer? Shave your head? Pluck your eyebrows? Install a chemo port into your neck? These days you don’t need to.