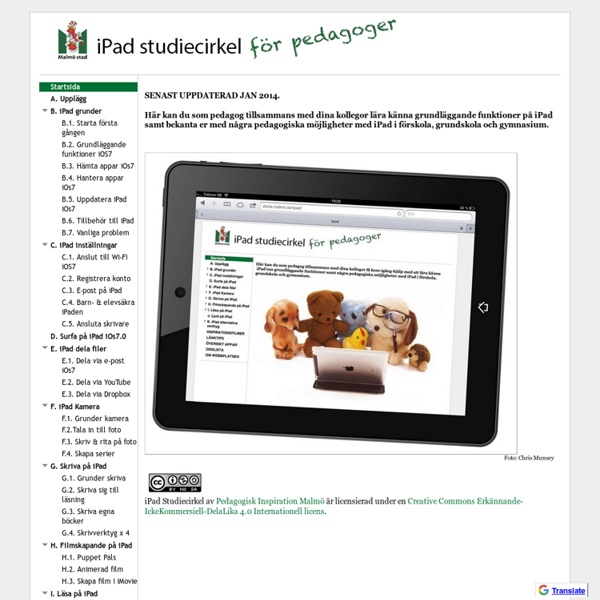 The 15 Best iPad Apps For The World Language Classroom The iPad has fundamentally changed how and what I teach in my Spanish classes. First of all, I no longer use textbooks. Ever. The Single Most Important Factor for iPad Success in Schools When you think of iPads in schools, you probably think of a cart that's wheeled into a classroom. Youngsters cheer at the arrival of the cart. Devices are passed out, used for a lesson, and then returned to the cart. The cart is then whisked away to another classroom where the same thing happens. Having a cart of devices puts the adults in charge of the technology.

Save Webpages as PDF in Safari on iPad without Third-Party Apps Apple’s App Store contains quite a significant number of quality iPad apps for PDF viewing, editing, annotation and organization. Hence, it is logical to save webpages as PDF for reference purposes. Without using any third-party app, webpages can be easily and quickly saved as PDF from within Safari.

A New Fantastic Bloom's Taxonomy Wheel for iPad Apps March 21, 2014 Today while I was browsing through my Twitter feeds I came across this fabulous Bloom's Taxonomy wheel of apps shared by Anthony. If you still recall, some previous versions of this wheel have already been featured here in Bloom's Taxonomy for Teachers section . As you can see, the wheel outlines a wide variety of verbs and activities related to each thinking level of Blooms taxonomy coupled with iPad apps that go with it. These apps are supposed to help teachers and students better cultivate these different thinking levels in their use of iPad apps.

SkyView® Free – Android-appar på Google Play You don't need to be an astronomer to find stars or constellations in the sky, just open SkyView® Free and let it guide you to their location and identify them. SkyView Free is a beautiful and intuitive stargazing app that uses your camera to precisely spot and identify celestial objects in sky, day or night. Find popular constellations as they fade in and out while you scan across the sky, locate planets in our solar system, discover distant galaxies, and witness satellite fly-bys. Du behöver inte vara en astronom att hitta stjärnor eller konstellationer på himlen, bara öppna SkyView® gratis och låt den guida dig till deras placering och identifiera dem. iPads Improve Classroom Learning, Study Finds Just how big is the universe, how small is an atom, and how long have we humans lived on Earth, compared with dinosaurs? Such answers are better learned with an iPad, according to a new study that shows just how tablets tap neurocognitive abilities that help students understand enormous scale and other difficult concepts. Students saw learning gains after as little as 20 minutes of study on the iPad, the research found, and if supported with guidance from an instructor their improvement may have been even more pronounced, the scientists suggest. "The bottom line is that these iPads and similar tools actually do make a difference," said physicist Matthew Schneps, a founding member of the Science Education Department at the Harvard-Smithsonian Center for Astrophysics in Massachusetts. Schneps explained that his virtual solar system study examined iPad use that is a bit different from most classroom applications.

23 Things Every Teacher Should Be Able To Do With An iPad Using an iPad is simple due to its intuitive interface, elegant touch interface, and user-friendly operating system. Below we’ve listed 23 different tasks a teacher should be able to perform with their iPad. We’ve tried to focus on the basics, along with some typical tasks a teacher may be required to complete. We’ve also (roughly) arranged them from less complicated to more complicated, so consider yourself an Unofficial iPad “Basic Hacker” if you can get to the bottom. For more complex iPad tasks and functions, we’re doing a follow-up post.

Sky Map – Android-appar på Google Play Sky Map is a hand-held planetarium for your Android device. Use it to identify stars, planets, nebulae and more. Originally developed as Google Sky Map, it has now been donated and open sourced.Troubleshooting/FAQThe Map doesn't move/points in the wrong placeMake sure you haven't switched into manual mode. Does your phone have a compass?