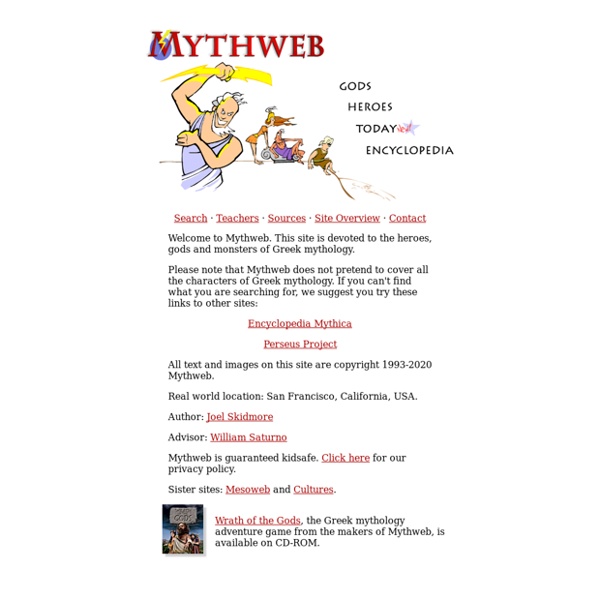 Please note that Mythweb does not pretend to cover all the characters of Greek mythology. If you can't find what you are searching for, we suggest you try these links to other sites: Encyclopedia Mythica Perseus Project Theoi Project If you have arrived here in the interface of some other website or software company and would prefer to travel here directly, our address is http://www.mythweb.com.

Meet the Greek Gods – Rick Riordan Please select a name from the list below to view the Greek god’s description. Zeus God of the Sky (Zoos) Mythical Chronology of Greece This Mythical Chronology of Greece depicts the traditional chronology established for the events of ancient Greek mythology by ancient chronographers and mythographers. This list largely reflects the work of Saint Jerome, whose work in turn was based primarily on the analysis of Apollodorus, Diodorus Siculus, and Eusebius. [1] In a few cases, the chronology also reflects the opinions of more recent scholars, who have cross referenced the mythology to archeological discoveries. These interpolations are noted with italics. Although the Greeks did believe that much of their mythology was grounded in fact, this list is not intended to imply the literal existence of real-world parallels to all the characters listed below. The dates below are approximate. Timeline

Borowitz Report Our privacy promise The New Yorker's Strongbox is designed to let you communicate with our writers and editors with greater anonymity and security than afforded by conventional e-mail. When you visit or use our public Strongbox server at The New Yorker and our parent company, Condé Nast, will not record your I.P. address or information about your browser, computer, or operating system, nor will we embed third-party content or deliver cookies to your browser. Strongbox servers are under the physical control of The New Yorker and Condé Nast. Strongbox is designed to be accessed only through a “hidden service” on the Tor anonymity network, which is set up to conceal both your online and physical location from us and to offer full end-to-end encryption for your communications with us.

Greek Mythology: FAMILY TREE OF THE GREEK GODS The complete family tree of the gods is displayed over eight indexed charts. The basic structure follows Hesiod's Theogony, but that author's genealogies have been expanded with a plethora of additional gods, spirits and creatures sourced from other classical sources. Where there is disagreement amongst ancient writers as to the genealogy of a certain character, the oldest and/or most popular source has been selected for the chart. An additional family tree depicts the divine genealogy given in Hesiod's Theogony.

The Ancient Olympics Ancient and Modern Olympic SportsA Tour of Ancient OlympiaThe Context of the Games and the Olympic SpiritAthletes' Stories Frequently Asked Questions About the Ancient Olympics Offical website of the Olympic Movement Further Reading This exhibit is a subset of materials from the Perseus database and is copyrighted. The copyright to the Perseus database is owned by the Corporation for Public Broadcasting and the President and Fellows of Harvard College and is protected by the copyright laws of the United States and the Universal Copyright Convention. All rights reserved. Read the full copyright notice.

HyperEpos Responding to the lack of genre-based sites on the web, I've gathered here an array of sites focused on epic poetry, aiming for the occasionally quirky as well as the canonical vision of the genre. In addition to the links to individual poems and poets, I've tried to incorporate a few key sites for chronological study. Thus, links to sites like Perseus, The Labyrinth or Romantic Circles, with all their wealth of connections, are included at the bottom of the appropriate page. Your comments and suggestions for inclusion or updating are appreciated.

Worldbuilding: Fantasy Religion Design Guide by Joe Wetzel (joewetzel at gmail dot com) [If you like this article, check out the other Worldbuilding articles on this website using the sidebar navigation.] Depending on your campaign setting idea, in the early stages you may only need a bare minimum of details about your religion. In cases like these make sure you flesh out any particular deities you need (for example if a character is a Cleric or Paladin describe that god in at least bullet points and note any needed game statistics or mechanics such as the god’s domains) and build up the religion later when it is needed or when you have an intriguing idea. This also gives you an opportunity to see how the players react to your religion’s skeleton and build on what they like and what is important to your evolving setting and story. But if religion, gods, or a pantheon is a key aspect of your campaign setting idea, you’ll want to work it up in detail early during your fantasy world’s development.

American Woodworker With the October 2014 issue, American Woodworker merged with Popular Woodworking Magazine. PWM welcomes subscribers to AW; in issues to come, we also welcome some of the best-known and best-loved authors from AW – Alan Lacer, Spike Carlsen and more. AW subscribers will receive an issue of PWM for each remaining issue on an AW order. Inside every issue of Popular Woodworking Magazine, you’ll discover expert woodworking techniques, tricks and inspiring projects from some of the best-known names in woodworking (Toshio Odate, Jeff Miller, Don Williams, Christopher Schwarz and Mike Dunbar, to name just a few). Welcome!

IRISH LITERATURE, MYTHOLOGY, FOLKLORE, AND DRAMA Irish Writers OnlineIrish PlayographyStudy Ireland: Poetry - BBCIrish Women Writers - M. OckerbloomIreland Literature GuidePoetry Ireland / Éigse ÉireannEarly Irish Lyric Poetry - Kuno MeyerSonnets from Ireland - E. BlomquistColum's Anthology of Irish Verse - Bartleby.comBREAC - Digital Journal of Irish Studies The Battle with the Titans - Classical Mythology With his rescued siblings, Zeus had the beginnings of an army with which to challenge Cronus. However, Cronus had some difficulty in assembling his own forces. Some of the Titans refused to help him in the struggle.

Mahabharatha and Trojan war - Greek influence on India Pandavas were sent to forest for 14 years, similarly the Greek-Trojan conflict went on for nearly 14 years. The actual conflict described by Homer in Iliad is only 14 days. Same is the case with Mahabharata war, the war at Kurukshetra went on only for 14 days. The Trojan war scene of Iliad starts with reluctance of Achilles to fight the war. Arjuna does the same in the beginning of Mahabharata war in the beginning of the war. Arjuna asks Krishna to take him to the centre of war field, and after seeing both armies formations , he refuses to fight and drops down his bow and arrows.