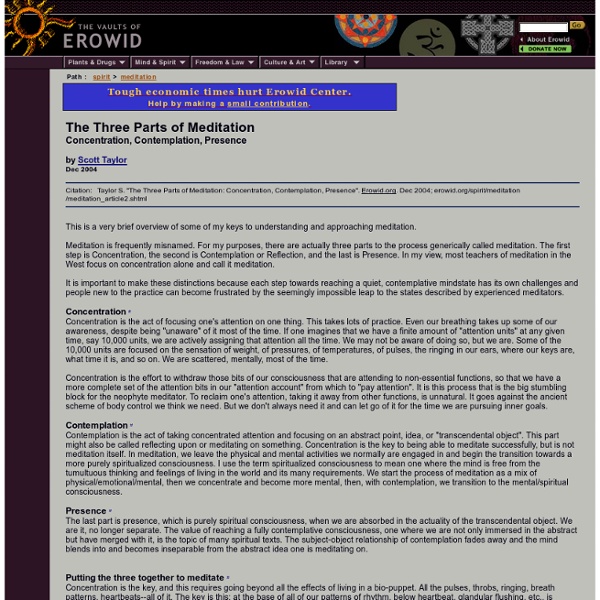 This is a very brief overview of some of my keys to understanding and approaching meditation. Meditation is frequently misnamed. For my purposes, there are actually three parts to the process generically called meditation. The first step is Concentration, the second is Contemplation or Reflection, and the last is Presence. It is important to make these distinctions because each step towards reaching a quiet, contemplative mindstate has its own challenges and people new to the practice can become frustrated by the seemingly impossible leap to the states described by experienced meditators. Concentration is the act of focusing one's attention on one thing. Concentration is the effort to withdraw those bits of our consciousness that are attending to non-essential functions, so that we have a more complete set of the attention bits in our "attention account" from which to "pay attention". Putting the three together to meditate # This is where the quiet mind opens up.

Become Who You Want To Be - StumbleUpon Guy Hottel Part 1 of 1 The FBI’s Reading Room contains many files of public interest and historical value. In compliance with the National Archives and Records Administration (NARA) requirements, some of these records are no longer in the physical possession of the FBI, eliminating the FBI’s capability to re-review and/or re-process this material. Please note, that the information found in these files may no longer reflect the current beliefs, positions, opinions, or policies currently held by the FBI. The image quality contained within this site is subject to the condition of the original documents and original scanning efforts. Some material contained in this site may contain actions, words, or images of a graphic nature that may be offensive and/or emotionally disturbing.

A Doctor Dishes: Which ‘Superfoods’ Are Worth the Cost? | Food & Health Most people you speak to these days are trying to stretch every dollar as far as possible—even the ones they spend buying apples and oranges. Food prices are expected to increase yet again this year, and food manufacturers are making portions smaller without reducing prices. Not surprisingly, a recent Rasmussen poll found that 93% of adults report paying more for groceries now than they did a year ago. So how can we supercharge our grocery dollars and get them to do overtime for us? Yes, some foods are obviously a better nutritional deal than others (think apples vs. potato chips), but there’s another class of foods that blows the rest of the field away in terms of nutrients and health-protecting qualities: superfoods. Superfoods can help prevent diabetes and heart disease, repair damage to your body’s cells and more. What to Know Before Buying Superfoods Before we dive into what to buy, there are a few important things to remember about consuming these foods: Dr. More From LearnVest

Choose to Be a Hero | Tiny Buddha: Wisdom Quotes, Letting Go,... “A hero is a man who does what he can.” -Romain Rolland Two weeks ago, a group of brave bystanders in Utah banded together to lift a burning car and save a man trapped beneath it. In 2009, a passenger on Northwest Flight 253 leapt onto a burning man to prevent him from detonating an explosive device on Christmas Day. Four years ago, a 50-year old man threw himself onto the subway tracks in Manhattan, just as a train was arriving, to save a man who had fallen after having a seizure. These men and women all had one thing in common: they were ordinary people, just like you and me, and they decided in an instant to do something heroic. According to renowned psychologist Dr. Dr. So what exactly makes a hero? A hero puts compassion into action by helping someone in need—whether it’s a friend or a stranger. A hero decides to speak out against injustice, instead of assuming someone else will do it. A hero supports the causes that matter to him or her, without expecting reward. How will you be a hero?

Today I learned something new. — Page 2 Today I learned that Britain has a constitution that is not written down in any single document. Unlike France or America, Britain has never had a major event – such as a revolution – that would lead to a new system of government. Consequently, there has been no need to write up a constitution. British constitution is set on principles and institutions that have developed over hundreds of years. Much of the British constitution is embodied in statutes, court judgments and treaties. The Allied forces included professional artists and other creatives among their members. Jack Masey, who was recruited at the age of 18, recalls his time in the Ghost Army: We were told we were going to be using inflatable equipment to try and fool the Germans into thinking that we were a real army, when we were in effect, I suppose, a rubber army. via theatlantic.com Guest post. Did you know that a gang once stole a 10-ton metal bridge in Czech Republic? Nutty as a… via dailymail.co.uk via buzzhunt.co.uk Read more…

Top 12 Healthy Foods for Better Immune System The flu season is upon us. Staying well while those around you sniffle and sneeze requires that you extract as much nutrition from your diet as you can, loading up on the foods that pack the biggest nutritional punch. Avoiding processed foods, grains, and sugar will go a long way toward strengthening your immune system. However, you can do even more by selecting foods that are loaded with specific immune-boosting nutrients. Eating a diet rich in the following foods will be far better for your health than loading up on handfuls of supplements, or worse yet, falling victim to vaccines that expose you to health risks far worse than influenza. Below, I have outlined what I consider to be the absolute best foods you can eat to help protect yourself this season, although the list is certainly not exhaustive. Unpasteurized Grass-Fed Organic Milk Raw organic milk from grass-fed cows contains beneficial bacteria that prime your immune system and can reduce allergies.

100 Best Quotes About Life - StumbleUpon A man who dares to waste one hour of time has not discovered the value of life. –Charles Darwin All life is an experiment. The more experiments you make the better. –Ralph Waldo Emerson All the art of living lies in a fine mingling of letting go and holding on. Any idiot can face a crisis – it’s day to day living that wears you out. A man sooner or later discovers that he is the master-gardener of his soul, the director of his life. Believe that life is worth living and your belief will help create the fact. Do not dwell in the past, do not dream of the future, concentrate the mind on the present moment. Don’t go around saying the world owes you a living. Every creature is better alive than dead, men and moose and pine trees, and he who understands it aright will rather preserve its life than destroy it. Every man dies. Everything has been figured out, except how to live. Everything in life is luck. Fortunately analysis is not the only way to resolve inner conflicts. We can’t plan life.

The God Particle: If the Universe Is the Answer, What Is the Question? The God Particle may refer to: Science[edit] Higgs Boson, a particle in theoretical physics sometimes referred to as the God Particle.The "God particle" is the nickname of a subatomic particle called the Higgs boson. Media[edit]