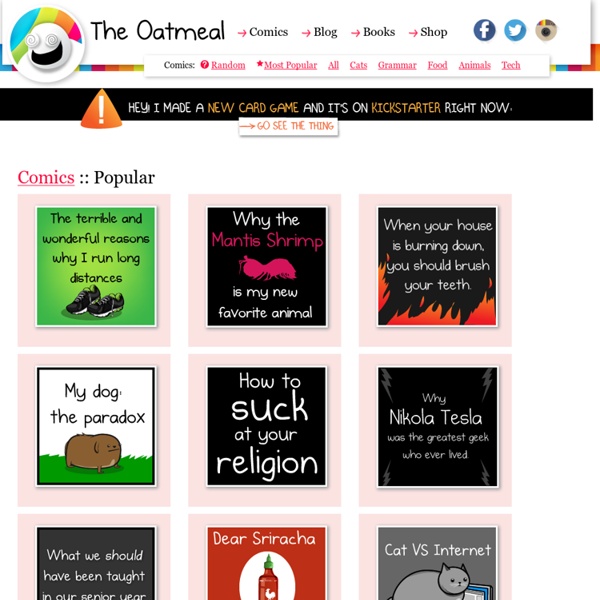 The terrible and wonderful reasons why I run long distances. A comic about a glorious undersea creature. 20 years ago today my house burned down, so I wrote a comic about it My dog: the paradox How to suck at your religion An ode to the father of the electric age. I created a better curriculum for high school seniors. A tribute to rooster sauce. A kitty tries to outperform a solid internet connection. This illustrated diagram will tell you how shit goes wrong during the zombie apocalypse. All artwork and content on this site is Copyright © 2016 Matthew Inman.

Teen Lit Review: Interview with Melody Carlson I am very excited to present our first author interview on Teen Lit Review. Melody Carlson is a well-established author of Christian women's, young adult and teen fiction. She writes realistic books that deal with pertinent topics many teenages deal with today. 1. I know that the teen years are challenging at best. 2. There are so many...perhaps my Diary of a Teenage Girl characters stand out the most. 3. All the general topics (like relationships, peer pressure, romance, faith...) are probably things I’ve extracted from my own life—and then developed and adapted as needed. 4. This story was actually inspired by a real person. 5. As a teen, shortly after I became a believer, I learned a valuable lesson about music. 6. Write, write, write.

Tesla - Master of Lightning: A Weapon to End War Tesla inherited from his father a deep hatred of war. Throughout his life, he sought a technological way to end warfare. He thought that war could be converted into, "a mere spectacle of machines." In 1931 Tesla announced to reporters at a press conference that he was on the verge of discovering an entirely new source of energy. Asked to explain the nature of the power, he replied, "The idea first came upon me as a tremendous shock... War clouds were again darkening Europe. The idea generated considerable interest and controversy. By 1937 it was clear that war would soon break out in Europe. What set Tesla's proposal apart from the usual run of fantasy "death rays" was a unique vacuum chamber with one end open to the atmosphere. Of all the countries to receive Tesla's proposal, the greatest interest came from the Soviet Union. Tesla hoped that his invention would be used for purely defensive purposes, and thus would become an anti-war machine.

30 Clever and Cool T-Shirt Designs You Will Love 2116 shares Adobe Illustrator CS6 Shortcuts Cheat Sheet Illustrator is a very important tool for designers and creative professionals. Read More 593 shares 30+ Fresh Icon Illustrator Tutorials As Graphic Designers, it’s important for us to learn how to create high quality icons. Sleep: A Groundbreaking Guide to the Mysteries, the Problems, and the Solutions (9781583333013): Carlos H. Schenck

eMagazine - Part 12 Welcome to Hotel-anus. Yes, anus. In fact, the hotel is so named because it resembles the human colon. Does speed reading training actually work? A Straight Dope Classic from Cecil's Storehouse of Human Knowledge February 14, 1992 Dear Cecil: What's the straight dope on speed reading? Evelyn Wood commercials in the late 70s showed people casually zipping through impressive-looking tomes, apparently having benefited from one of Evy's speed-reading courses. The concept, as I recall it, was that one learned to read not word-by-word but line-by-line and eventually paragraph-by-paragraph. — John Ashborne, Chicago Cecil replies: I'm not saying it's not a scam. Claims that speed readers comprehend just as well as ordinary readers are probably spurious. To find out the truth about speed reading we turn to researchers Marcel Just, Patricia Carpenter, and Michael Masson, all spiritual graduates of the Cecil Adams Cut-the-Comedy School of Scientific Investigation. The researchers found that the speed readers read a little faster than the skimmers (700 WPM versus 600 WPM) and much faster than the normal readers (240 WPM). — Cecil Adams

College Poison Blog - Kris Madden - The Speed Reading Writer Gadgets n U !! Map my India launches portable charger for gadgets by vinayak mathur Map my India is better known for their GPS devices but this time they have launched a portable and high capacity mobile charger which you can carry. It can charge mobile phones, gaming consoles, GPS system, tablets, laptops or anything else. The charger has a massive 2200 mAh capacity. It can help you charge your portable devices and when it exhausts, you can again charge it for future use. The charger can be recharged in only three to four hours of time.