How to spot a liar. Huffpost. How aware are you of your emotions? 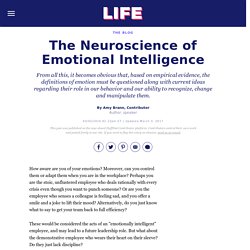 Moreover, can you control them or adapt them when you are in the workplace? Perhaps you are the stoic, unflustered employee who deals rationally with every crisis even though you want to punch someone? Or are you the employee who senses a colleague is feeling sad, and you offer a smile and a joke to lift their mood? Alternatively, do you just know what to say to get your team back to full efficiency? These would be considered the acts of an "emotionally intelligent" employee, and may lead to a future leadership role. Is emotional intelligence a sound concept? The idea, in essence, stated that emotional intelligence, or EQ as it became known (an abbreviation of Emotional Quotient), was a more accurate predictor of success in life than a person's Intelligence Quotient (IQ). Emotional intelligence is the ability to recognize and control your emotions and behavior while remaining aware of the effect that these have on others around you. Measuring Students' Self-Control: A 'Marshmallow Test' for the Digital Age.

5 Psychological Conditions Named for Disney Characters. These characters had their own fairy tales and books and, later, Disney movies. 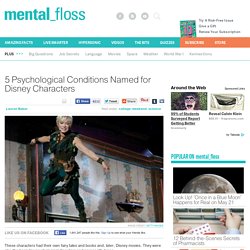 They were also the basis for psychological disorders and personality types. 1. Peter Pan Syndrome Peter Pan is the boy who won’t grow up. Does that accurately describe a person in your life? 2. Sleeping Beauty is the story of a 16 year old girl who pricks her finger on a spinning wheel and falls into a deep sleep, only to be woken by a prince’s kiss years later. 3. “Rapunzel, Rapunzel, let down your hair!” See Also: 11 Disney Character Cameos in Other Disney Movies 4. Bambi, the cute little deer whose mother got shot and killed, is also the namesake of this other not-officially-recognized complex. 5.

Ah, Cinderella. Why the Myers-Briggs test is totally meaningless. A Harvard psychologist says people judge you based on 2 criteria when they first meet you. Harvard social psychologist Amy Cuddy. 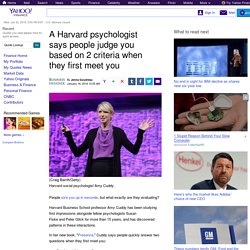 People size you up in seconds, but what exactly are they evaluating? Harvard Business School professor Amy Cuddy has been studying first impressions alongside fellow psychologists Susan Fiske and Peter Glick for more than 15 years, and has discovered patterns in these interactions. In her new book, "Presence," Cuddy says people quickly answer two questions when they first meet you: Can I trust this person? Can I respect this person? Psychologists refer to these dimensions as warmth and competence respectively, and ideally you want to be perceived as having both. Interestingly, Cuddy says that most people, especially in a professional context, believe that competence is the more important factor.

But in fact warmth, or trustworthiness, is the most important factor in how people evaluate you. (Amazon) Cuddy's new book explores how to feel more confident. While competence is highly valued, Cuddy says it is evaluated only after trust is established. A Renowned Psychologist Says There Are 4 Personality Types Based On 4 Colors. Which Are You? According to the research of Dr. 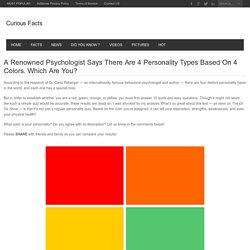 Carol Ritberger — an internationally famous behavioral psychologist and author — there are four distinct personality types in the world, and each one has a special color. But in order to establish whether you are a red, green, orange, or yellow, you must first answer 10 quick and easy questions. Though it might not seem like such a simple quiz would be accurate, these results are dead-on. I was shocked by my analysis.What’s so great about this test — as seen on The Dr. Oz Show — is that it’s not just a regular personality quiz. What color is your personality? Please SHARE with friends and family so you can compare your results! Shut Up I’m Still Talking added a new photo.

Thursday, 4 February 2016 10:07 pm Timeline Photos. Are You a 'Pre-Crastinator'? You’ve no doubt heard of procrastination. 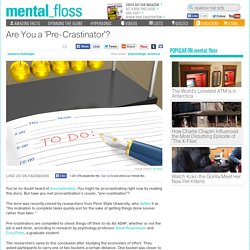 You might be procrastinating right now by reading this story. But have you met procrastination’s cousin, “pre-crastination”? The term was recently coined by researchers from Penn State University, who define it as “the inclination to complete tasks quickly just for the sake of getting things done sooner rather than later.” Pre-crastinators are compelled to check things off their to-do list ASAP, whether or not the job is well done, according to research by psychology professor David Rosenbaum and Cory Potts, a graduate student.

The researchers came to this conclusion after studying the economics of effort. But to their surprise, that’s not what many participants did. “‘I wanted to get it done more quickly,’” Potts says these participants reported. We see real-life examples of pre-crastination all the time. Rosenbaum and Potts speculate that our pre-crastination tendencies are rooted in evolution. But maybe the answer is even simpler, Potts says. Measuring Students’ Self-Control: A ‘Marshmallow Test’ for the Digital Age.