HistoryOfPsychologyTimeline2. What Makes Some Songs Popular? What makes some songs so popular? 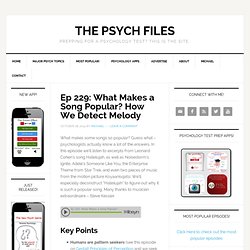 Data for Research Methods and Statistics in Psychology and Social Work #socialwork #datasets #statistics #psychology #research. Using The iPhone’s Front-Facing Camera, Cardiio Measures Your Heartrate. It’s still relatively early in mobile health, although there are glucose monitors that can be tacked onto iPhones, heart rate and sleep monitoring apps and of course, plenty of exercise and diet-tracking products. 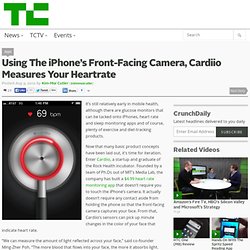 Now that many basic product concepts have been laid out, it’s time for iteration. Enter Cardiio, a startup and graduate of the Rock Health incubator. Founded by a team of Ph.Ds out of MIT’s Media Lab, the company has built a $4.99 heart rate monitoring app that doesn’t require you to touch the iPhone’s camera. It actually doesn’t require any contact aside from holding the phone so that the front-facing camera captures your face.

In a scene from the 1999 sci-fi film, the hero is famously ambushed after becoming distracted by a woman on the street wearing a slinky red outfit. Now, a new study shows how such duds attain their sway. Men rate women wearing red clothing as being more interested in sex, hinting that humans may be conditioned to associate the color with fertility. The pull of red is nothing new. Women have donned pinkish blush and bright lipstick for nearly 12,000 years. Mitt Romney vs. Newt Gingrich: How much do looks matter in presidential politics? Photograph by Emmanuel Dunand/AFP/Getty Images. 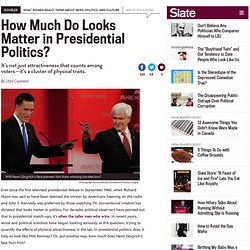 Ever since the first televised presidential debate in September 1960, when Richard Nixon was said to have been deemed the winner by Americans listening on the radio and John F. Kennedy was preferred by those watching TV, conventional wisdom has dictated that looks matter in politics. For decades political observers have pointed out that in presidential match-ups, it’s often the taller man who wins. In recent years, social and political scientists have begun looking seriously at this question, trying to quantify the effects of physical attractiveness in the lab. In presidential politics, does it help to look like Mitt Romney? Yawning Together. 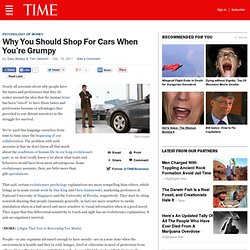 We’ve used this language ourselves from time to time since the beginning of our collaboration. The problem with such accounts is that we don’t know all that much about the conditions of human life in our long evolutionary past, so we don’t really know a lot about what traits and behaviors would have been most advantageous. Some evolutionary accounts, then, are little more than glib speculations. That said, certain evolutionary psychology explanations are more compelling than others, which brings us to some recent work by Dan King and Chris Janiszewski, marketing professors at National University of Singapore and the University of Florida, respectively. Darkness makes the heart grow more selfish. The blues artist Robert Cray once sang, “I know the difference between wrong and right. 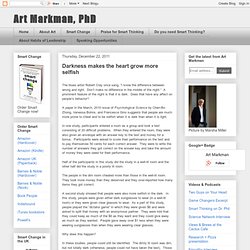 Don’t make no difference in the middle of the night.” A prominent feature of the night is that it is dark. Does that have any affect on people’s behavior? A paper in the March, 2010 issue of Psychological Science by Chen-Bo Zhong, Vanessa Bohns, and Francesca Gino suggests that people are much more prone to cheat and to be selfish when it is dark than when it is light.

In one study, participants entered a room as a group and took a test consisting of 20 difficult problems. Half of the participants in this study did the study in a well-lit room and the other half did the study in a poorly lit room. How does our brain know what is a face and what's not? Objects that resemble faces are everywhere. 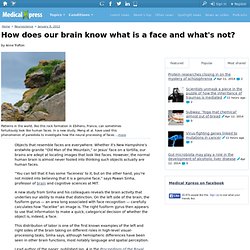 Babies know a joke when they hear it. Babies can tell when their parents are telling a joke according to research published in the Society’s British Journal of Developmental Psychology. 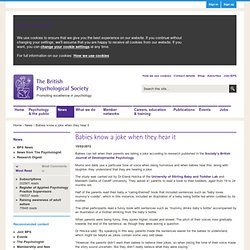 Mums and dads use a particular tone of voice when being humorous and when babies hear this, along with laughter, they understand that they are hearing a joke. The study was carried out by Dr Elena Hoicka of the University of Stirling Baby and Toddler Lab and Merideth Gattis of Cardiff University. They asked 41 parents to read a book to their toddlers, aged from 19 to 24 months old.