Psych me up (the science of sex and relationships) 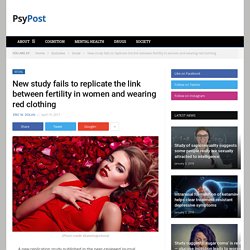 Previous research had found that women were more likely to wear red or pink at peak fertility. In other female mammals, such as chimpanzees, red skin coloration is used to advertise the fertile window in an observable manner (estrus). Humans do not display observable physical changes associated with ovulation, but it was thought women may still be using the color red to attract mates at peak fertility. The new replication study tested the association between ovarian hormones and wearing red clothing using an ethnically diverse sample of 164 women who were 18 to 36 years old.

But the researchers found no compelling evidence that women who were more fertile were more likely to wear red than another color of clothing. PsyPost interviewed the study’s corresponding author, Khandis R. Sex Makes Everything Less Disgusting. Our biological drive to do it conflicts pretty directly with our biological drive not to get involved with other people's bodily fluids. 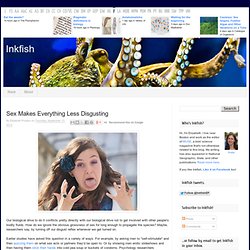 How do we ignore the obvious grossness of sex for long enough to propagate the species? Maybe, researchers say, by turning off our disgust reflex whenever we get turned on. Earlier studies have asked this question in a variety of ways. Not Exactly Rocket Science. Married couples are happier when they commute in the same direction. What we do with our bodies can trigger metaphorical associations in our minds, having knock-on effects for perceptions and attitudes. 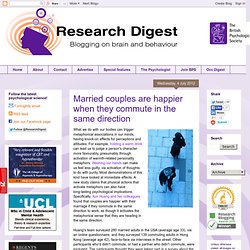 For example, holding a warm drink can lead us to judge a person's character more favourably, presumably through activation of warmth-related personality metaphors. The Internal Clitoris. Consider this: In over five million years of human evolution, only one organ has come to exist for the sole purpose of providing pleasure—the clitoris. 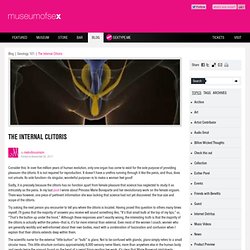 It is not required for reproduction. It doesn’t have a urethra running through it like the penis, and thus, does not urinate. The best and worst sex (and science) stories of 2010. This year seems to have just flown by, and what a busy one it was for research and stories about sex. 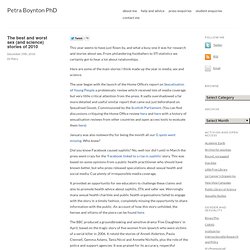 From philandering footballers to STI statistics we certainly got to hear a lot about relationships. Here are some of the main stories I think made up the year in media, sex and science. The year began with the launch of the Home Office’s report on Sexualisation of Young People a problematic review which received lots of media coverage but very little critical attention from the press. It sadly overshadowed a far more detailed and useful similar report that came out just beforehand on Sexualised Goods, Commissioned by the Scottish Parliament. Everything You Wanted to Know About Semen-Collecting Robots (and Then Some) The relation between sexual orientation and penile... [Arch Sex Behav. 1999] - PubMed result. Female orgasm captured in series of brain scans. After orgasm, activity in the hypothalamus and nucleus accumbens gradually calms down. 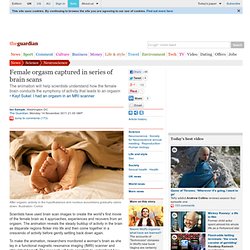 Illustration: Corbis Scientists have used brain scan images to create the world's first movie of the female brain as it approaches, experiences and recovers from an orgasm. The animation reveals the steady buildup of activity in the brain as disparate regions flicker into life and then come together in a crescendo of activity before gently settling back down again. To make the animation, researchers monitored a woman's brain as she lay in a functional magnetic resonance imaging (fMRI) scanner and stimulated herself. The research will help scientists to understand how the brain conducts the symphony of activity that leads to sexual climax in a woman. By studying people who have orgasms, Professor Barry Komisaruk, a psychologist at Rutgers University in New Jersey and his team hope to uncover what goes wrong in both men and women who cannot reach sexual climax.

On men and how they should dance « the.soft.anonymous. It’s a common scenario. 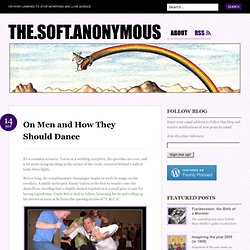 Hens can pick future fathers by ejecting sperm. Feral chickens have developed an effective countermeasure to avoid being fertilised by a forceful, sub-standard mate. 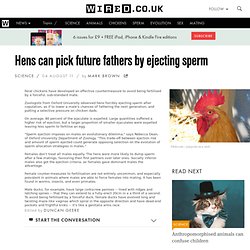 Zoologists from Oxford University observed hens forcibly ejecting sperm after copulation, as if to lower a male's chances of fathering the next generation, and putting a selective pressure on chicken dads. On average, 80 percent of the ejaculate is expelled. Large quantities suffered a higher risk of ejection, but a larger proportion of smaller ejaculates were expelled leaving less sperm to fertilise an egg.

Let’s hear it for the boy. A fascinating study just published in the Archives of Sexual Behaviour looked at the link between women’s vocalisations during sex and the timing of orgasm during heterosexual encounters, finding that there was little connection with female climax but a strong link with male ejaculation. 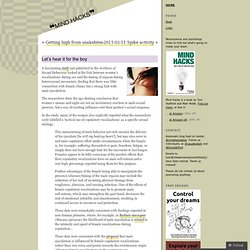 The researchers draw the ego-denting conclusion that women’s moans and sighs are not an involuntary reaction to male sexual prowess, but a way of exerting influence over their partner’s sexual response. In the study, many of the women also explicitly reported what the researchers coyly labelled a ‘tactical use of copulatory vocalizations’ as a specific sexual strategy. When death is an aphrodisiac. What effect do thoughts of death have on a typical person's desire for sex? The short answer is that it depends. Armed with insight from terror management theory and attachment theory, Gurit Birnbaum and her colleagues have made a start unpicking the detail of when and for whom death is an aphrodisiac. To the Victors Go the Orgasms, Says Study on Post-Election Desire. Basketball games, elections and other head-to-head contests seem to affect the testosterone of people who care about them. 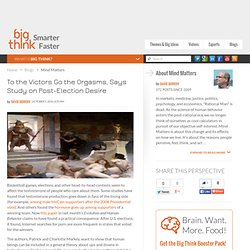 Some studies have found that testosterone production goes down in fans of the losing side (for example, among male McCain supporters after the 2008 Presidential vote). And others found the hormone goes up among supporters of a winning team. My big fat geek wedding: Tears, joy and oxytocin - life - 10 February 2010. Editorial: How to put science into romance WE'D booked the venue, chosen the bridesmaids' dresses and even decided on the colours of the table decorations. But finding a refrigerated centrifuge and a ready supply of dry ice in rural south-west England was proving tricky.

Then there were the worries about getting blood on my silk wedding dress, and what to do if someone fainted. Basics - Skipping Spouse to Spouse Isn’t Just a Man’s Game. Men with brown eyes are perceived as more dominant, but it&#039;s not because their eyes are brown. White men with brown eyes are perceived to be more dominant than their blue-eyed counterparts. However, a blue-eyed man looking to make himself appear more dominant would be wasting his time investing in brown-coloured contact lenses. A new study by Karel Kleisner and colleagues at Charles University in the Czech Republic has found that brown iris colour seems to co-occur with some other aspect of facial appearance that triggers in others the perception of dominance.

Sixty-two student participants, half of them female, rated the dominance and/or attractiveness of the photographed faces of forty men and forty women. Men&#039;s sexual tastes broaden when they are stressed. Men are drawn to a wider range of women when they are feeling stressed out, according to research into the psychology of sexual attraction. People are usually attracted to partners with similar facial features to their own, but after a brief but stressful experience, men's preferences changed to include a wider variety of women, the study found. Relaxed men who took part in the study rated women on average 14% less appealing if they looked very different from themselves compared with women who looked similar. Tears as chemical signals – smell of female tears affects sexual behaviour of men. In an Israeli laboratory, Shani Gelstein is harvesting a woman’s tears. The volunteer is watching the end of the boxing film The Champ. As she weeps, she holds a vial under her eyes to capture the fresh drops.

Sustainable Love - Tara Parker-Pope on Happy Marriages. Do We Drink Because We&#039;re Monogamous, or Are We Monogamous Because We Drink? - NYTimes.com. Our latest Freakonomics Radio podcast is called “Do More Expensive Wines Taste Better?” It features some research presented by the American Association of Wine Economists, whose members include Karl Storchmann, managing editor of the group’s Journal of Wine Economics. What effect has the internet had on our sex lives? Sealed with a kiss - and neuroscience.