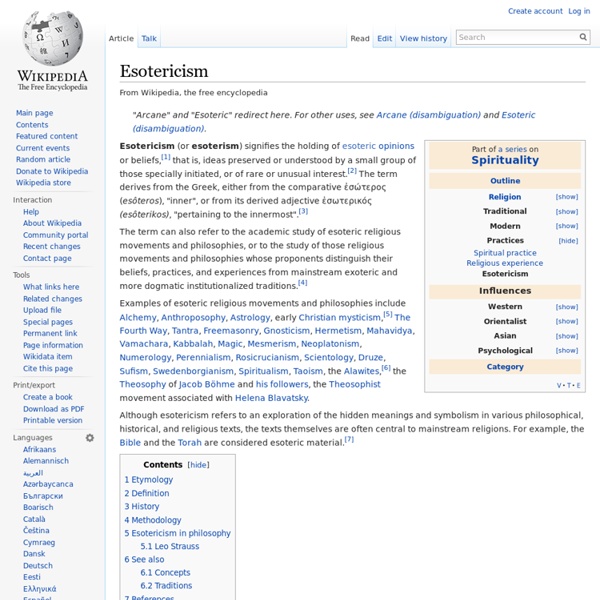 Esotericism (or esoterism) signifies the holding of esoteric opinions or beliefs,[1] that is, ideas preserved or understood by a small group of those specially initiated, or of rare or unusual interest.[2] The term derives from the Greek, either from the comparative ἐσώτερος (esôteros), "inner", or from its derived adjective ἐσωτερικός (esôterikos), "pertaining to the innermost".[3] The term can also refer to the academic study of esoteric religious movements and philosophies, or to the study of those religious movements and philosophies whose proponents distinguish their beliefs, practices, and experiences from mainstream exoteric and more dogmatic institutionalized traditions.[4] Although esotericism refers to an exploration of the hidden meanings and symbolism in various philosophical, historical, and religious texts, the texts themselves are often central to mainstream religions. For example, the Bible and the Torah are considered esoteric material.[7] Etymology[edit] Definition[edit]

Indigo children Indigo children, according to a pseudoscientific New Age concept, are children who are believed to possess special, unusual and sometimes supernatural traits or abilities.[4] The idea is based on concepts developed in the 1970s by Nancy Ann Tappe[5] and further developed by Jan Tober and Lee Carroll. The concept of indigo children gained popular interest with the publication of a series of books in the late 1990s and the release of several films in the following decade. A variety of books, conferences and related materials have been created surrounding belief in the idea of indigo children and their nature and abilities. The interpretations of these beliefs range from their being the next stage in human evolution, in some cases possessing paranormal abilities such as telepathy, to the belief that they are more empathetic and creative than their peers. Origins[edit] Sarah W.

Fantastic art Fantastic art is a broad and loosely-defined art genre.[1] It is not restricted to a specific school of artists, geographical location or historical period. It can be characterised by subject matter - which portrays non-realistic, mystical, mythical or folkloric subjects or events - and style, which is representational and naturalistic, rather than abstract - or in the case of magazine illustrations and similar, in the style of graphic novel art such as manga. The subject matter of Fantastic Art may resemble the product of hallucinations, and Fantastic artist Richard Dadd spent much of his life in mental institutions. Salvador Dalí famously said: "the only difference between me and a madman is that I am not mad".[3] Some recent Fantastic Art draws on the artist's experience, or purported experience, of hallucinogenic drugs. Fantastic art has traditionally been largely confined to painting and illustration, but since the 1970s has increasingly been found also in photography. Notes[edit]

Left-hand path and right-hand path The Baphomet, from Eliphas Levi's "Dogme et Rituel de la Haute Magie", 1854, adopted symbol of some "Left-Hand Path" belief systems. The terms Left-Hand Path and Right-Hand Path refer to a dichotomy between two opposing approaches found in Western esotericism, which itself covers various groups involved in the occult and ceremonial magic. In some definitions, the Left-Hand Path is equated with malicious Black magic and the Right-Hand Path with benevolent White magic.[1]:152 Other occultists have criticised this definition, believing that the Left-Right dichotomy refers merely to different kinds of working, and does not necessarily connote good or bad magical actions.[1]:176 Terminology[edit]

Realm A realm /ˈrɛlm/ is a community or territory over which a sovereign rules; it is commonly used to describe a kingdom or other monarchical or dynastic state. The Old French word reaume, modern French royaume, was the word first adopted in English; the fixed modern spelling does not appear until the beginning of the 17th century. The word supposedly derives from medieval Latin regalimen, from regalis, of or belonging to a rex, (king).[1] "Realm" is particularly used for those states whose name includes the word kingdom (for example, the United Kingdom), to avoid clumsy repetition of the word in a sentence (for example, "The Queen's realm, the United Kingdom...").

Invocation An invocation (from the Latin verb invocare "to call on, invoke, to give") may take the form of: These forms are described below, but are not mutually exclusive. See also Theurgy. Supernatural The supernatural (Medieval Latin: supernātūrālis: supra "above" + naturalis "nature", first used: 1520–30 AD)[1][2] is that which is not subject to the laws of physics, or more figuratively, that which is said to exist above and beyond nature. In philosophy, popular culture and fiction, the supernatural is associated with the paranormal, religions and occultism. It has neoplatonic[3] and medieval scholastic[4] origins.

Western esotericism Western esotericism (also Western hermetic tradition, Western mysticism, Western inner tradition, Western occult tradition, and Western mystery tradition) is a broad spectrum of spiritual traditions found in Western society, or refers to the collection of the mystical, esoteric knowledge of the Western world. This often includes, but is not limited to, philosophy, meditation, herbalism, alchemy, astrology, divination, and various forms of ritual magic. The tradition has no one source or unifying text, nor does it hold any specific dogma, instead placing emphasis on spiritual "knowledge" or gnosis and the rejection of blind faith. Although the protosciences were widespread in the ancient world, the rise of modern science was born from occult varieties of Western Esotericism reinterpreted in the "Age of Enlightenment" and is documented within the field known as the History of science. Definition[edit]

Medievalism Medievalism is the system of belief and practice characteristic of the Middle Ages, or devotion to elements of that period, which has been expressed in areas such as architecture, literature, music, art, philosophy, scholarship, and various vehicles of popular culture.[1] Since the 18th century, a variety of movements have used the medieval period as a model or inspiration for creative activity, including Romanticism, the Gothic revival, the Pre-Raphaelite and arts and crafts movements and neo-medievalism (a term often used interchangeably with medievalism). Medievalism can also be used as an insult, implying conservatism and outdated attitudes.