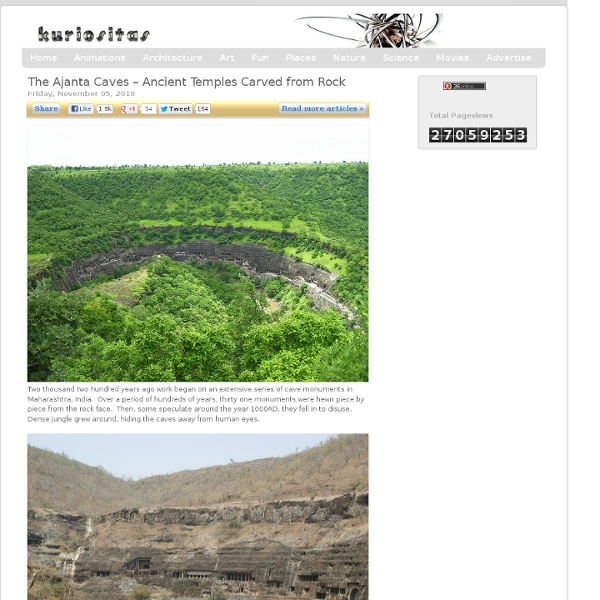 Two thousand two hundred years ago work began on an extensive series of cave monuments in Maharashtra, India. Over a period of hundreds of years, thirty one monuments were hewn piece by piece from the rock face. Then, some speculate around the year 1000AD, they fell in to disuse. Dense jungle grew around, hiding the caves away from human eyes. They Ajanta caves lay undisturbed for hundreds of years. Then, in April 1819, during the time of the British Raj, an officer with the unassuming name of John Smith came rediscovered a doorway to one of the temples. One can only imagine what went through Smith's head when he made his find. The nearest human habitation is Ajinṭhā, a tiny village a few miles away from the caves. The first caves were hewn from the bare rock at the time of The Sātavāhana Empire which started around 230BC. There are paintings everywhere – literally. They were created using an ancient method. Image Credit Flickr User Ashok666

Real-life Da Vinci Code: Tiny numbers and letters discovered on the Mona Lisa By Nick Pisa and Luke Salkeld Created: 17:25 GMT, 12 December 2010 Intrigue is usually focused on her enigmatic smile. But the Mona Lisa was at the centre of a new mystery yesterday after art detectives took a fresh look at the masterpiece – and noticed something in her eyes. Hidden in the dark paint of her pupils are tiny letters and numbers, placed there by the artist Leonardo da Vinci and revealed only now thanks to high-­magnification techniques. Under the microscope: Historians in Italy have discovered that by magnifying the eyes of the Mona Lisa painting tiny numbers and letters can be seen

Pumapunku Coordinates: An example of high-precision small holes Stone blocks at Pumapunku Pumapunku or Puma Punku (Aymara and Quechua puma cougar, puma, punku door, hispanicized Puma Puncu) is part of a large temple complex or monument group that is part of the Tiwanaku Site near Tiwanaku, Bolivia. Tiwanaku is significant in Inca traditions because it is believed to be the site where the world was created.[1] In Aymara, Puma Punku's name means "The Door of the Puma". The Pumapunku complex consists of an unwalled western court, a central unwalled esplanade, a terraced platform mound that is faced with stone, and a walled eastern court.[2][3][4] Spirit Walk Ministry - Bird Animal Spirits Albatross,-- Stamina and endurance, ability to remain in emotional situations for extended periods of time, awkward yet effective beginnings and endings, seeing the benefits of extended parenting Anhinga,-- The advantages of keeping wet, not wildly flapping to get somewhere, patiently waiting for the opportunity to spear your quarry Bee Eater -- Ability to see auras, use of color in healing, capture of moving objects, ability to dig to find answers Bird of Paradise -- Extravagant and elaborate thoughts.

Hinduism About Hinduism: Oldest of the world's major religions. It evolved from the Vedic religion of ancient India. Though the various Hindu sects each rely on their own set of scriptures, they all revere the ancient Vedas, which were brought to India by Aryan invaders after 1200 BC. Nessie and Other Lake Monsters by Mark Chorvinsky Nearly 1000 feet deep and 24 miles long, Scotland's Loch Ness is believed by many to be home to the unidentified aquatic creature affectionately dubbed "Nessie." Since the larger public first became aware of the monster in 1933, the Loch Ness beastie has become an international media star, her most recent appearance on a commemorative stamp recently issued by the Maldive Islands. Nessie has attained the status of a classic phenomenon and her popularity endures. No other monster is as tied in with a country's image as Nessie is with Scotland. Nessie has been featured in hundreds of newspaper and magazine articles, dozens of books, and has starred or co-starred in several feature films and innumerable documentaries, including an upcoming major studio release.

Secret Teachings of All Ages Index For once, a book which really lives up to its title. Hall self-published this massive tome in 1928, consisting of about 200 legal-sized pages in 8 point type; it is literally his magnum opus. Each of the nearly 50 chapters is so dense with information that it is the equivalent of an entire short book. If you read this book in its entirety you will be in a good position to dive into subjects such as the Qabbala, Alchemy, Tarot, Ceremonial Magic, Neo-Platonic Philosophy, Mystery Religions, and the theory of Rosicrucianism and Freemasonry. Although there are some questionable and controversial parts of the book, such as the outdated material on Islam, the portion on the Bacon-Shakespeare hypothesis, and Hall's conspiracy theory of history as driven by an elite cabal of roving immortals, they are far out-weighed by the comprehensive information here on other subjects.

With Maidens of Mystery - The artwork of Audrey Kawasaki Audrey Kawasaki is a Los Angeles-based painter, known for her characteristic works that are painted directly onto wood panels. Kawasaki studied fine art painting at the Pratt Institute in New York City, but left after two years without completing her degree. The emphasis that New York art standards put on conceptual art was at odds with her painting ideologies and was the reason for her leaving. The unique style that she renders to her artworks can be described as a fusion of eastern as well as western traditions such as Art Nouveau and Japanese Manga comics. Audrey’s paintings are portrayals of young, mesmerizing women who come across as innocent and tantalizing at once.

Prabalgad Fort, India Prabalgad Fort, also known as Kalavantin Durg (Kalavantin’s Fort), is located between Matheran and Panvel in the Indian state of Maharashtra, at an elevation of 2,300 feet in the Western Ghats. It was built at the pinnacle of a rocky plateau very close to Matheran. Previously, the fort was known as Muranjan until it was taken over and renamed by the Maratha forces under Shivaji's rule. The fort can be approached via a chillingly steep climb.