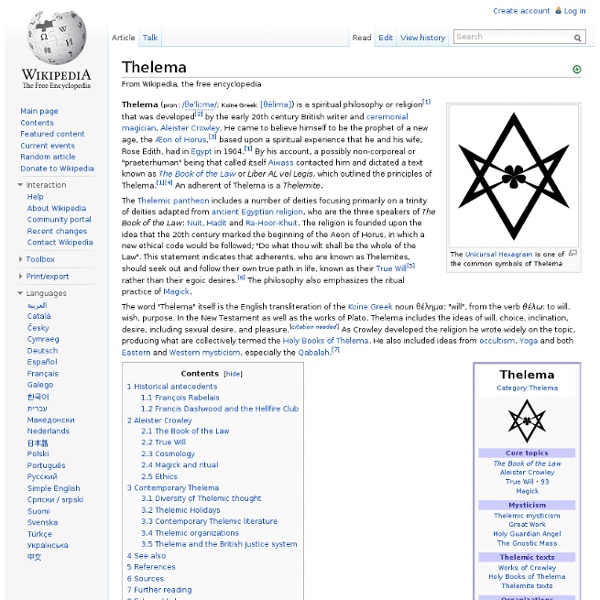 The word thelema is the English transliteration of the Koine Greek noun θέλημα (pronounced [θélima]) "will", from the verb θέλω "to will, wish, purpose." As Crowley developed the religion, he wrote widely on the topic, producing what are collectively termed the Holy Books of Thelema. He also included ideas from occultism, Yoga and both Eastern and Western mysticism, especially the Qabalah.[8] Historical precedents[edit] The word θέλημα (thelema) is rare in classical Greek, where it "signifies the appetitive will: desire, sometimes even sexual",[9] but it is frequent in the Septuagint.[9] Early Christian writings occasionally use the word to refer to the human will,[10] and even the will of God's opponent, the Devil,[11] but it usually refers to the will of God.[12] One well-known example is in the "Lord's Prayer" (Matthew 6:10), “Your kingdom come. François Rabelais[edit] François Rabelais was a Franciscan and later a Benedictine monk of the 16th century. Aleister Crowley[edit]

Aiwass Aiwass is the name given to a voice that English occultist Aleister Crowley claimed to have heard on April 8, 9, and 10 in 1904. Crowley claimed that this voice, which he considered originated with a discarnate intelligence, dictated The Book of the Law (or Liber Legis) to him. The dictation[edit] According to Crowley, the first appearance of Aiwass was during the Three Days of the writing of Liber al vel Legis. His first and only identification as such is in Chapter I: "Behold! Crowley described the encounter in detail in The Equinox of the Gods, saying: The Voice of Aiwass came apparently from over my left shoulder, from the furthest corner of the room. In the later-written Liber 418, the voice of the 8th Aethyr says "my name is called Aiwass," and "in The Book of the Law did I write the secrets of truth that are like unto a star and a snake and a sword." Identity[edit] However, Crowley also spoke of Aiwass in symbolic terms. Alternative views[edit] Gematria[edit] Notes[edit]

French Revolution The French Revolution (French: Révolution française) was an influential period of social and political upheaval in France that lasted from 1789 until 1799. Inspired by liberal and radical ideas, the Revolution profoundly altered the course of modern history, triggering the global decline of theocracies and absolute monarchies while replacing them with republics and democracies. Through the Revolutionary Wars, it unleashed a wave of global conflicts that extended from the Caribbean to the Middle East. External threats closely shaped the course of the Revolution. The modern era has unfolded in the shadow of the French Revolution. Causes The French government faced a fiscal crisis in the 1780s, and King Louis XVI was blamed for mishandling these affairs. Adherents of most historical models identify many of the same features of the Ancien Régime as being among the causes of the Revolution. By the 1990s the Marxist class interpretation had largely been abandoned among scholars. Ancien Régime

How to Grow a Handlebar Mustache Between No Shave November across college campuses nationwide, and Movember raising money in the fight against prostate cancer, there are all kinds of reasons to embark on growing your very own handlebar mustache this winter. How to Grow a Handlebar Mustache Hopefully, by now you have your eye on the manly mustache style you want to achieve. Step 1: Don’t Trim Your Mustache DON’T TRIM IT! Step 2: Comb It When your mustache is long enough to comb, comb it once a day and create a part by combing the hair out from under the nose to the left and to the right respectively. Step 3: Wax It After you get out of the shower, leave your mustache damp. Step 4: Twist and Shape It To add that distinctive handlebar curl, apply some wax to the ends and twist the hairs together with your fingers. Step 5: Maintain It Owning a handlebar mustache is a commitment. After you’ve grown your handlebar mustache, you might consider petitioning the illustrious Handlebar Mustache Club for membership:

Aleister Crowley After an unsuccessful attempt to climb Kanchenjunga and a visit to India and China, Crowley returned to Britain, where he attracted attention as a prolific author of poetry, novels, and occult literature. In 1907, he and George Cecil Jones co-founded a Thelemite order, the A∴A∴, through which they propagated the religion. After spending time in Algeria, in 1912 he was initiated into another esoteric order, the German-based Ordo Templi Orientis (OTO), rising to become the leader of its British branch, which he reformulated in accordance with his Thelemite beliefs. Through the OTO, Thelemite groups were established in Britain, Australia, and North America. He spent the First World War in the United States, where he took up painting and campaigned for the German war effort against Britain, later revealing that he had infiltrated the pro-German movement at the behest of the British intelligence services. Early life[edit] Youth: 1875–94[edit] Cambridge University: 1895–98[edit] Had! [edit]

Understanding Your Individuality One of the aspects of having a balanced mindset is that you are no longer prone towards extremist view-points, you don’t see things in a “black and white” manner, rather you start perceiving the “grey areas”, which is what allows you to be free of delusional thinking. For example, the adage of “you can do anything you set your mind to”, or “impossible is nothing”, can feel very emotionally motivating, and it can create a spur of adrenaline, and it makes for a great pep talk, but it’s also a very “black and white” statement, which is delusional at best – it’s just a fact that there are many things that you just can’t do, no matter how hard you try, simply because your body is not made for it. Another aspect of understanding your individuality is to see through your “past”, see through your old self, your past conditioning, that no longer resonates with you currently. Being aware of your current individuality Letting go of your old self Implications of living your current individuality

The Lesser Key of Solomon The Lesser Key of Solomon, also known as Clavicula Salomonis Regis[note 1] or Lemegeton, is an anonymous grimoire (or spell book) on demonology. It was compiled in the mid-17th century, mostly from materials a couple of centuries older.[1][2] It is divided into five books—the Ars Goetia, Ars Theurgia-Goetia, Ars Paulina, Ars Almadel, and Ars Notoria.[1][3] Ars Goetia[edit] The most obvious source for the Ars Goetia is Johann Weyer's Pseudomonarchia Daemonum in his De praestigiis daemonum. Weyer's Officium Spirituum, which is likely related to a 1583 manuscript titled The Office of Spirits,[7] appears to have ultimately been an elaboration on a 15th-century manuscript titled Le Livre des Esperitz (of which 30 of its 47 spirits are nearly identical to spirits in the Ars Goetia).[2][5] This portion of the work was later translated by S. The Seventy-Two Demons[edit] Ars Theurgia Goetia[edit] Ars Paulina[edit] Ars Almadel[edit] Ars Notoria[edit] Editions and translations[edit] Notes[edit]

How to Be Charming: 11 steps Edit Article Having a Charming AttitudeWielding Physical CharmCharming People With Words Edited by Ambrozine Santiago, biuealien, Ben Rubenstein, Brett and 162 others Charm is the art of having an attractive personality. Some people charm others the moment they enter a room, while others earn a reputation as a charmer over a period of time. While everyone is born with differing amounts of natural charm, much can be acquired and honed through practice. Ad Steps Method 1 of 3: Having a Charming Attitude 1Be genuinely interested in people. Method 2 of 3: Wielding Physical Charm 1Make eye contact. Method 3 of 3: Charming People With Words 1Use impressive phrasing. Tips Put some humor in the things you say. Warnings Don't confuse being charming with being a people pleaser.Every so often you will have no choice but to express an opinion that few others hold. Article Info