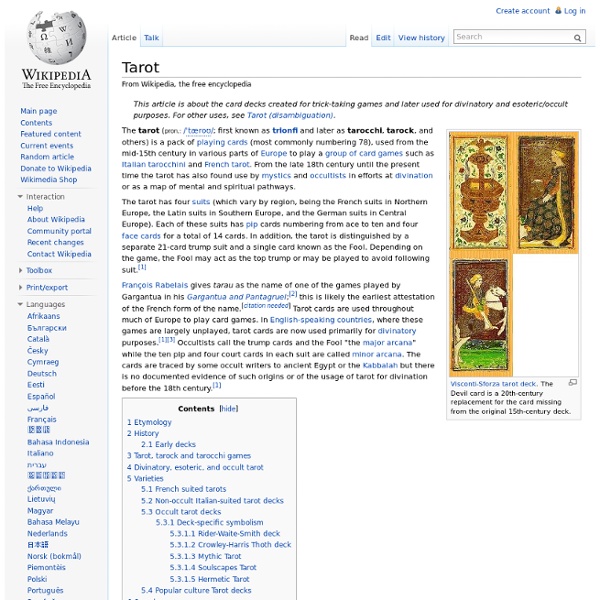 Visconti-Sforza tarot deck. The Devil card is a 20th-century replacement for the card missing from the original 15th-century deck. François Rabelais gives tarau as the name of one of the games played by Gargantua in his Gargantua and Pantagruel;[2] this is likely the earliest attestation of the French form of the name. Etymology[edit] History[edit] Early decks[edit] Le Bateleur: The Juggler from the Jean Dodal Tarot of Marseilles. Picture-card packs are first mentioned by Martiano da Tortona probably between 1418 and 1425, since the painter he mentions, Michelino da Besozzo, returned to Milan in 1418, while Martiano himself died in 1425. Special motifs on cards added to regular packs show philosophical, social, poetical, astronomical, and heraldic ideas, Roman/Greek/Babylonian heroes, as in the case of the Sola-Busca-Tarocchi (1491)[1] and the Boiardo Tarocchi poem, written at an unknown date between 1461 and 1494.[9] Tarot, tarock and tarocchi games[edit] Varieties[edit]

The Chariot (Tarot card) Chariot The Chariot (VII) is the seventh trump or Major Arcana card in most traditional Tarot decks. It is used in game playing as well as in divination. A. Some frequent keywords include: Conquest — Honor — Victory — EnergyEgocentrism — Self—confidence — Conviction — AnxietyWillpower — Self—assertion — Hard control — DisciplineInflexibility — Success — Wealth — RecognitionImpulsivity — Command — Bravery — Pride A powerful, princely figure sits in a swift chariot, pulled usually by two sphinxes or horses. It has been suggested the square on the charioteer's chest is a representation of the earth tattva.[1] Another view is that the mood of the card may be characterized as that of conquest. The chariot is one of the most complex cards to define. What does this all mean? The Chariot is a fascinating card, but also frustrating. On the one hand, the Chariot may indicate loyalty, faith, and motivation; a conviction that will lead to victory no matter the odds. Jump up ^ Ogre Battle - Tarot Cards

Midlife crisis For the song by Faith No More, see Midlife Crisis. For the psychological concept, see Generativity vs. Stagnation. Midlife crisis is a term coined in 1965 by Elliott Jaques stating a time where adults come to realize their own mortality and how much time is left in their life.[1] A midlife crisis is experienced by many people during the midlife transition when they realize that life may be more than halfway over. Sometimes, a crisis can be triggered by transitions experienced in these years, such as andropause or menopause, the death of parents or other causes of grief, unemployment or underemployment, realizing that a job or career is hated but not knowing how else to earn an equivalent living, or children leaving home. Crisis vs stressors[edit] Academic research since the 1980s rejects the notion of midlife crisis as a phase that most adults go through. It is important to understand the difference between a midlife crisis and a midlife stressor. Occurrence[edit] Characteristics[edit]

Eye Color List Eye Color List (Note: an updated version of this 2K-word article appears in my 15K-word book How to Describe Eyes and Faces. See below.) Skip to the meanings of eye colors! [First, my profound apologies to the vast majority of readers who don't steal content, but I have to state the following. This article and all content on this website belongs to Val Kovalin, copyright © Obsidianbookshelf.com, except where noted. Don't miss the companion article How to Describe Eyes where I show photos of different colored eyes, discuss clichés and how to improve upon them, describe the appearance of eyes, and explain some physical actions involving the eyes. Here at Obsidianbookshelf.com, I've listed the color terms alphabetically within the main categories of Black, Blue, Brown, Gray, Green, Hazel, and Violet. I'll also tell you about word usage: some terms can sound too literal, some inadequate, and some too grandiose. Amber or Golden eyes – see Brown - amber. Black. Blue. Brown. Gray. Green.

if you get tired of your life and want to live the happy life then come and visit our website which offer you the best top psychic sites and also the psychic experts:
by gurutells32 Feb 1