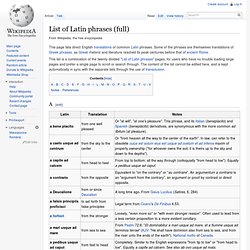 Some of the phrases are themselves translations of Greek phrases, as Greek rhetoric and literature reached its peak centuries before that of ancient Rome. This list is a combination of the twenty divided "List of Latin phrases" pages, for users who have no trouble loading large pages and prefer a single page to scroll or search through. The content of the list cannot be edited here, and is kept automatically in sync with the separate lists through the use of transclusion. Ex pede Herculem. The Artist Moved to Despair by the Grandeur of Antique Fragments, chalk and sepia drawing by Henry Fuseli, 1778-79 Ex pede Herculem, "from his foot, [we can measure] Hercules", is a maxim of proportionality inspired by an experiment attributed to Pythagoras. 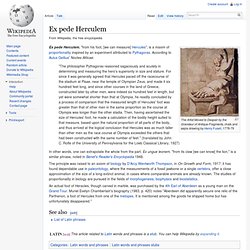 According to Aulus Gellius' Noctes Atticae: "The philosopher Pythagoras reasoned sagaciously and acutely in determining and measuring the hero's superiority in size and stature. Ludi Latini University of Oklahoma. Fun Latin. Reference desk/Archives/Language/2012 June 7. Commander of ancient ships that aren't triremes[edit] If a trierarch is the commander of a trireme, what do you call the commander of a penteconter or a quinquereme, etc? 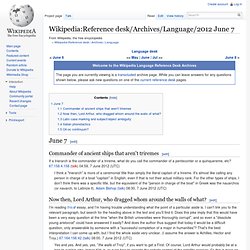 67.158.4.158 (talk) 04:59, 7 June 2012 (UTC) I think a "trierarch" is more of a ceremonial title than simply the literal captain of a trireme. It's almost like calling any person in charge of a boat "captain" in English, even if that is not their actual military rank. For the other types of ships, I don't think there was a specific title, but the equivalent of the "person in charge of the boat" in Greek was the nauarchos (or navarch, to Latinize it).

Now then, Lord Arthur, who dragged whom around the walls of what? I'm reading this essay, and I'm having trouble understanding what the point of a particular aside is. Yes and yes. Contemporary Latin. Token Latin[edit] As a relic of the great importance of New Latin as the formerly dominant international lingua franca down to the 19th century in a great number of fields, Latin is still present in words or phrases used in many languages around the world. 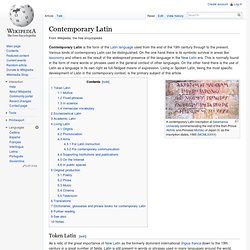 Mottos[edit] The official use of Latin in previous eras has survived at a symbolic level in many mottos that are still being used and even coined in Latin to this day. Old mottoes like E pluribus unum found in 1776 on the Seal of the United States, along with Annuit cœptis and Novus ordo seclorum, and adopted by an Act of Congress in 1782, are still in use. Similarly current pound sterling coins are minted with the Latin inscription ELIZABETH·II·D·G·REG·F·D (Dei Gratia Regina, Fidei Defensor, i.e. Fixed phrases[edit] Some common phrases that are still in use in many languages have remained fixed in Latin, like the well known dramatis personæ or habeas corpus. Perseus Digital Library. Words. Words by William Whitaker Latin to English Translate English to Latin The dictionary is about 39000 entries, as would be counted in an ordinary dictionary. 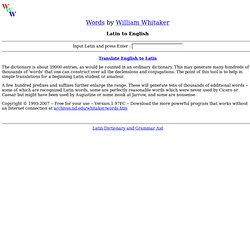 This may generate many hundreds of thousands of 'words' that one can construct over all the declensions and conjugations. The point of this tool is to help in simple translations for a beginning Latin student or amateur. A few hundred prefixes and suffixes further enlarge the range. Copyright © 1993-2007 -- Free for your use -- Version 1.97FC -- Download the more powerful program that works without an Internet connection at archives.nd.edu/whitaker/words.htm. Glossary of Grammar and Syntax. Ablative One of the six recognized cases in Latin. 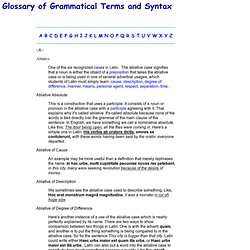 The ablative case signifies that a noun is either the object of a preposition that takes the ablative case or is being used in one of several adverbial usages, which students of Latin must simply learn: cause, description, degree of difference, manner, means, personal agent, respect, separation, time. Ablative Absolute This is a construction that uses a participle. It consists of a noun or pronoun in the ablative case with a participle agreeing with it. Latin declension. Latin is an inflected language, and as such its nouns, pronouns, and adjectives must be declined (i.e. their endings alter to show grammatical case). A set of declined forms of the same word pattern is called a declension. There are five declensions, which are numbered and grouped by ending and grammatical gender. For simple declension paradigms, visit the Wiktionary appendices: First declension, Second declension, Third declension, Fourth declension, Fifth declension.

Each noun follows one of these five declensions. Grammatical cases[edit] A complete Latin noun declension consists of up to seven grammatical cases: nominative, vocative, accusative, genitive, dative, ablative and locative. They are often abbreviated to the first three letters. The sequence NOM-VOC-ACC-GEN-DAT-ABL has been the usual order taught in Britain and many Commonwealth countries since the publication of Hall Kennedy's Latin Primer (1866). Meanings and functions of the various cases[edit] Syncretism[edit] 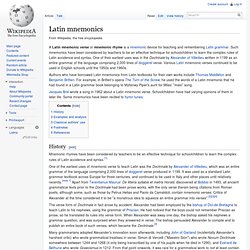 Such mnemonics have been considered by teachers to be an effective technique for schoolchildren to learn the complex rules of Latin accidence and syntax. One of their earliest uses was in the Doctrinale by Alexander of Villedieu written in 1199 as an entire grammar of the language comprising 2,000 lines of doggerel verse. Various Latin mnemonic verses continued to be used in English schools until the 1950s and 1960s. 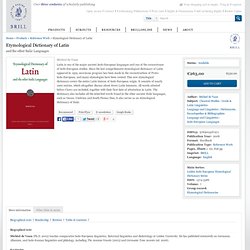 He has published extensively on Germanic, Albanian, and Indo-Iranian linguistics and philology, including The Avestan Vowels (2003) and Germanic Tone Accents (ed. 2006). Readership. The Comic Latin Grammar. Latin Humor. Below are some humorous pieces of Latin and not quite Latin that I've picked up over the years, mostly from the latinteach mailing list. 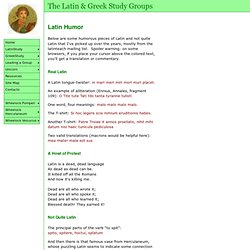 Spoiler warning: on some browsers, if you place your cursor above the colored text, you'll get a translation or commentary.