Substance theory - Wikipedia. Essentialism. A view that every entity has identifying attributes In philosophy[edit] 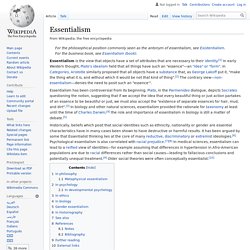 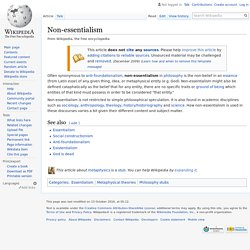 It is also found in academic disciplines such as sociology, anthropology, theology, history/historiography and science. How non-essentialism is used in these discourses varies a bit given their different content and subject matter. Quantum Theory Proves That Consciousness Moves to Another Universe After Death – Learning Mind. A book titled “Biocentrism: How Life and Consciousness Are the Keys to Understanding the Nature of the Universe“, published in the USA, has stirred up the Internet because of the notion that life does not end when the body dies and can last forever. 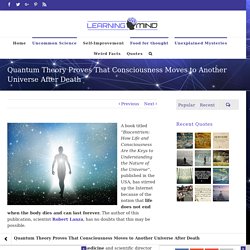 The author of this publication, scientist Robert Lanza, has no doubts that this may be possible. Beyond time and space Lanza is an expert in regenerative medicine and scientific director at Advanced Cell Technology Company. While he is known for his extensive research on stem cells, he was also famous for several successful experiments on cloning endangered animal species. But not so long ago, the scientist turned his attention to physics, quantum mechanics and astrophysics. The theory implies that death simply does not exist.

Lanza believes that multiple universes can exist simultaneously. This means that a dead person, while traveling through the ‘tunnel’, ends up in a similar world he or she once inhabited, but this time alive. Soul quanta. Biocentric universe - Wikipedia. Biocentric universe (from Greek: βίος, bios, "life")—also known as biocentrism—is a concept proposed in 2007 by American doctor of medicine Robert Lanza, a scientist in the fields of regenerative medicine and biology,[1][2][3] which sees biology as the central driving science in the universe, and an understanding of the other sciences as reliant on a deeper understanding of biology. 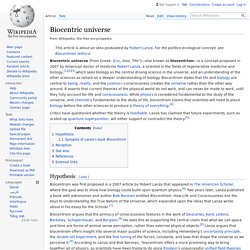 Biocentrism states that life and biology are central to being, reality, and the cosmos—consciousness creates the universe rather than the other way around. It asserts that current theories of the physical world do not work, and can never be made to work, until they fully account for life and consciousness. While physics is considered fundamental to the study of the universe, and chemistry fundamental to the study of life, biocentrism claims that scientists will need to place biology before the other sciences to produce a theory of everything.[4] Critics have questioned whether the theory is falsifiable. Falsifiability. This photo corroborates the basic statement "On this day, there were black swans on this waterway", which contradicts the law "All swans are white", but the contradicting basic statement alone makes the law falsifiable: it would still be falsifiable, even if there were only white swans.

Idealism. The 20th-century British scientist Sir James Jeans wrote that "the Universe begins to look more like a great thought than like a great machine. 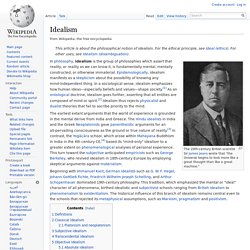 " Beginning with Immanuel Kant, German idealists such as G. W. F. New Thought - Wikipedia. The New Thought movement is a philosophical movement which developed in the United States in the 19th century, following the teachings of Phineas Quimby. 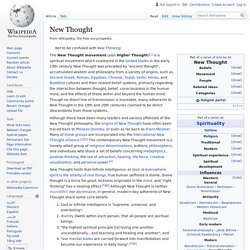 There are numerous smaller groups, most of which are incorporated in the International New Thought Alliance.[1][2] The concept of New Thought (sometimes known as "Higher Thought"[3]) promotes the ideas that Infinite Intelligence, or God, is everywhere, spirit is the totality of real things, true human selfhood is divine, divine thought is a force for good, sickness originates in the mind, and "right thinking" has a healing effect.[4][5] The teachings of Christian Science are similar to and partially based on Quimby's teachings, as its founder, Mary Baker Eddy, was a student of Quimby's. 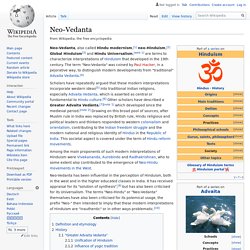 The term "Neo-Vedanta" was coined by Paul Hacker, in a pejorative way, to distinguish modern developments from "traditional" Advaita Vedanta. Scholars have repeatedly argued that these modern interpretations incorporate western ideas into traditional Indian religions, especially Advaita Vedanta, which is asserted as central or fundamental to Hindu culture. Other scholars have described a Greater Advaita Vedānta,[note 1] which developed since the medieval period. Autodidacticism. Autodidacticism (also autodidactism) or self-education (also self-learning and self-teaching) is education without the guidance of masters (such as teachers and professors) or institutions (such as schools). 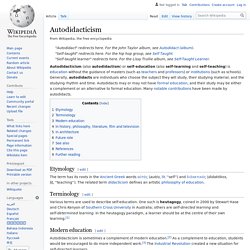 Generally, an autodidact is an individual who chooses the subject they will study, their studying material, and the studying rhythm and time. An autodidact may or may not have formal education, and their study may be either a complement or an alternative to it. Many notable contributions have been made by autodidacts. Muriel Barbery - Wikipedia. Muriel Barbery (born 28 May 1969) is a French novelist and professor of philosophy. 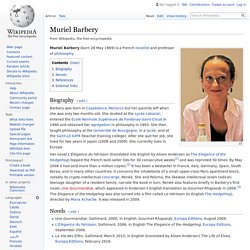 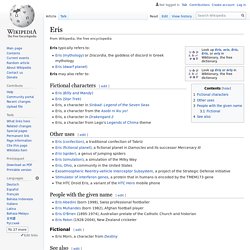 Meno. Characters[edit] Meno is visiting Athens from Thessaly with a large entourage of slaves attending him. Young, good-looking and well-born, Meno is a student of Gorgias, a prominent sophist whose views on virtue clearly influence Meno's. Hecuba. Parents[edit] According to Suetonius in The Twelve Caesars, the emperor Tiberius pestered scholars with obscure questions about ancient mythology, with one of his favorites being "Who was Hecuba's mother? " Archpoet. This article is about the 12th century anonymous Latin poet.

For the early Irish concept of "arch-poet", see Ollam. A cellarer testing his wine. (13th century)