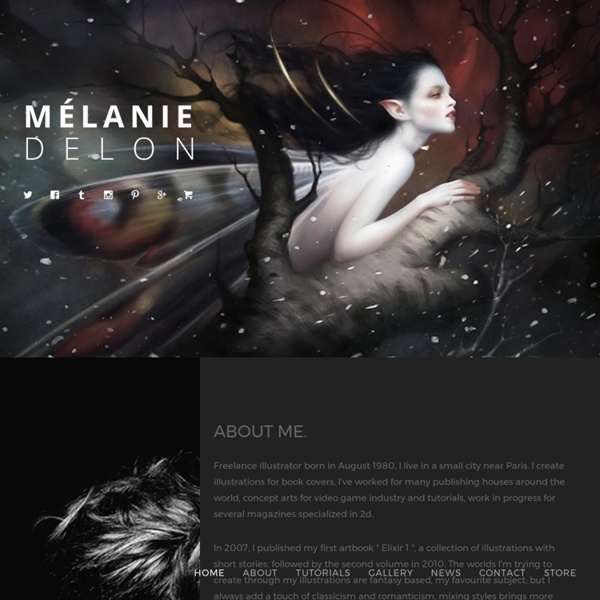 For Commissions & licencing, please feel free to contact me : contact@melaniedelon.com Note that I DO NOT work for free, and DO NOT take private commissions. For personal query, like using my artworks for tubes and such, please read the Legal term below. Born in 1980 (in france, so excuse me for my very bad english ^^), and as far as I can remember I have always drawn… but on paper. I studied archeology and history of arts, then I went to a gamedesign school (for 2 years), which just was not my thing.

Fine Art and You: Acrylic Paintings By French Visual Artist Patrice Murciano Patrice Murciano was born in Belfort on May 27, 1969, he grew up in South of France. He is a visual artist and uses mostly acrylic color for painting. He started to draw at an early age of 6 years. ANEYEONI.COM SUNDAY, OCTOBER 2nd 2005 Too much news and projects ! I’m currently too busy to update my gallery but I’ve got tons of new pictures to show. My website even need a new complete lifting, with removal of a lot of old pictures. In some months, as early as I’ve got the time with my working schedule… I’m currently still working on the next Splinter Cell videogame, some more Magic cards, another big Wizard of the Coast project, covers for books and RPG books ( White Wolf, Gallimard, Fleuve Noir, COPS for Asmodée), the second issue of « Legends of the Round table » for Soleil…

Most Popular Artists The most popular artist searches last month: a not-to-be-taken-too-seriously measurement of which famous artists have the greatest "mindshare" in our collective culture. Moving up: Edgar Degas (#22 to #12), Titian (#28 to #18), and realist painter Janet Fish (appearing for the first time on the list at #29). Moving down: Joan Miro (#13 to #19), Wassily Kandinsky (#11 to #24) and Paul Gauguin (#21 down to #32). How we measure popularity: In order to eliminate any kind of selection bias due to search engine ranking, external links, etc., we only count internal links from our own search box and our artist listings.

CGS Artist Profile - Linda Tso While the world outside has a rich collection of reference, there is nothing like the web as the source of searchable visual reference, and Linda Tso takes advantage of that resource for mood. “I've saved a lot of beautiful images and paintings from the web,” she explains, “and I like to browse through the folders when I have nothing to do. As much as things like music and writing inspires me as well, it's the visual queues that make the greatest impact, and that includes movies, dreams and magazines of any kind.

Fine Art and You: Wil Lof Wil Lof is a DutchAbstract Painter who was born in Hengelo-Netherlands and started her love affair with painting in adolescence. When she was 16 years old, she joined a large Dutch textile printer and worked there as an apprentice. For twenty years she has worked as a leading coloriste ans dessinatrice for different textile printers such as Parisign and Texoprint. KARL BANG - Visionary Art Karl Bang Karl Bang's collection of art masterpieces could easily be called Goddess Central. Karl was born as Bong Ka in Shanghai in 1935. He was formally trained by the master artists of Chinese painting and he also formally trained in the European painting tradition in France and Belgium.

Beautiful Digital Illustration Art by I Chen Lin – I.D. 43 I Chen Lin is a multi tasking illustrator who has shown his potentialities for many times. His works speaks for him. In painting style he blend cartoon and realistic style and let the work bring an eastern color, present mysterious and colorful effect. Check out some of his beautiful work. Advertisement Eric Freitas I’ve just discovered some wax materials that I’m very excited about! Yes, that’s right, I just said I’m excited about wax….what of it? I’ve been diving more seriously into the world of casting, and I like some of the creative doors that the process opens up. Fine Art and You: American illustrator William Loomis was born in Syracuse, New York, and grew up in Zanesville, Ohio and spent much of his working life in Chicago, Illinois. William Andrew Loomis was an American illustrator, author, and art instructor. His work was featured prominently in advertising and magazines; but, he is best known as author a series of instructional art books printed throughout the 20th century. Long after his death, Loomis' realistic style has continued to influence popular artists.

VLADIMIR KUSH - Surrealist Art (Russia) Looking at these surrealist paintings, you get the impression that Vladimir Kush of Russia must have been highly influenced by artist Salvador Dalí. Vladimir states, "Art school was a world of a new inspiration. The class I attended allowed total artistic freedom. I learned much about the famous Renaissance painters, impressionists, post-impressionists, and contemporary artists. Here I painted my first surreal picture.” courtesy of ziza.es

Banksy 'The Palestinian Job' We couldn't work out if Banksy's taging of the Segregation Wall Palestine was 'Cheap publicity from other peoples misery' or 'Publicity for Palestinian misery'? So here is a review from the Intifada. Well-known UK graffiti artist Banksy hacks the Wall Nigel Parry, The Electronic Intifada, 2 September 2005 The Wall around Qalqiliya. Ruth Sanderson's Golden Wood Studio - Welcome I am happy to share the process for creating the cover illustration of my upcoming book A CASTLE FULL OF CATS, due to be released in early 2015. Yes, it takes almost a year for a publisher to produce a book after the artwork is delivered. I’ll be doing lots of sneak previews during the year. Fine Art and You: Beautiful Illustrations by Sarah Bochaton Hey all! How are you doing? Hope you are having a great time browsing this wonderful fine art blog and have found some of the most amazing and incredible art works on this planet. Today, I am back with some very amazing and lovely watercolour illustrations made by Sarah Bochaton who is a France based artist and loves to showcase talent with the medium of watercolour illustrations.