ESPN: The Worldwide Leader in Sports. Facebook. Fantasy Football 2016: Cheatsheet for Sleepers and Busts Heading into Your Draft. The Olympics rage on, European soccer has returned and college football is right around the corner, but let's be honest: Your mind is on fantasy football. 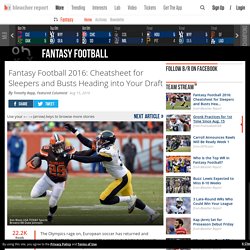 Hey, I don't blame you. My mind is there, too. So let's embark upon one of August's most time-honored traditions: obsessing over potential sleepers and busts for the upcoming NFL season. Sleepers We won't be going over each and every potential sleeper in great detail, but we'll try to offer a brief look at why several of the players listed above are sleeper candidates. Quarterbacks Jim Brown-USA TODAY Sports Titans QB Marcus Mariota Jameis Winston and Marcus Mariota each flashed major potential in their rookie seasons, so it's hardly a stretch to think they'll show improvement in 2016.

Colin Kaepernick is the deepest of sleepers, but if he wins the starting job in San Francisco and adjusts to head coach Chip Kelly's offense, he could be a fantasy monster given his ability on the ground. 2016 NFL Predictions: Fantasy Studs and Duds at Every Position. All fantasy football players have their guys. 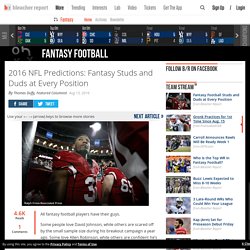 Some people love David Johnson, while others are scared off by the small sample size during his breakout campaign a year ago. Some love Allen Robinson, while others are confident he’s due for a regression. These choices are often subjective—there’s no definite right or wrong answer. Could Johnson and A-Rob keep dominating for the Arizona Cardinals and Jacksonville Jaguars, respectively? Absolutely. But that preseason fire could also fizzle out once the real games start. Let’s talk studs and duds below. 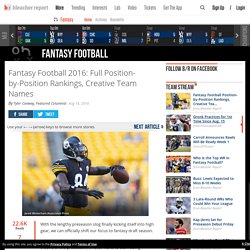 While it's not advisable to begin drafting leagues until after Week 3 of the preseason, it never hurts to start doing research. Rankings and lists of sleepers give you an idea of what to expect on draft night, even if it all gets thrown out the window once your buddy has three too many beers and takes Zach Sudfeld in the sixth round. Seriously. Fantasy Football 2016: Breaking Down Updated Mock Draft and Mobile Cheat Sheet. Anybody can slap down a bunch of rankings and leave them there for you to ponder and disagree with and consult without any real context. 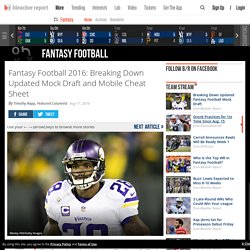 But what's the point of that? Will rankings alone help you craft a draft philosophy? I think not. So I decided to provide my 10-round rankings round by round in the format of a 10-player draft, breaking down the type of strategy I'll be employing each round. Certainly, my strategy isn't a fixed one—a great fantasy player adapts to their league's other players and what the board provides—but my rankings should give you an idea of how I'll be approaching fantasy drafts this summer.

Note: If Le'Veon Bell wins his appeal and isn't suspended for any games, he's the top player on my board. A lot of people are going to recommend taking a wide receiver in the first round. So if you decided to target wide receivers in the first round, I wouldn't blame you. Fantasy Football 2016: Skill-Position Rankings, Team Names and More Draft Info. Draft day is coming, and fantasy football players must prepare accordingly. 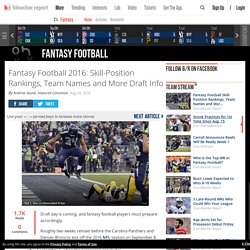 Roughly two weeks remain before the Carolina Panthers and Denver Broncos kick off the 2016 NFL season on September 8. In a perfect world, gamers can keep studying for a draft scheduled after September 1, when the preseason concludes. There are injuries to beware and playing-time battles to monitor. Extra research time always helps, especially for those of us who also have baseball leagues (or actual responsibilities) to manage. As anyone who snagged Kelvin Benjamin or Jordy Nelson early last August can attest to, there's no reason to rush. Of course, it's usually difficult to find an agreeable time for all parties. 2016 Fantasy Football Mock Draft: Strategy and Cheat Sheet for Opening Rounds.

This is the year where all the previous fantasy football strategies get turned on their heads. 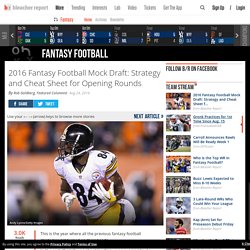 In the past, the talk was about loading up on running backs and figuring out who at that position would be trustworthy. However, wide receivers are the hot commodity in 2016 with the NFL completely transformed into a passing league. This change and others will create some intriguing picks in the first few rounds of your draft. Here is a look at projections for a 10-team league with standard scoring, along with a breakdown of how you should approach the big day. Stick with Receivers You Can Trust Sam Greenwood/Getty Images As mentioned above, running backs have been devalued in fantasy football. Last season, "sure things" such as Le'Veon Bell, Marshawn Lynch and Jamaal Charles dealt with injuries, while Eddie Lacy and C.J.

While you still want to add running backs, the top picks should go to those you can trust to perform at a high level on a consistent basis. Balance Is Key. Fantasy Football Mock Draft 2016: Round-by-Round Expert Projections. Andy Lyons/Getty Images Phillip Dorsett should have an every-down role for the Colts in 2016. 1. 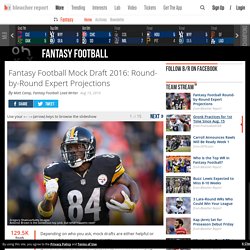