26 True Stories That Prove Humanity Is Not All Bad. 6 Real Places on Earth Straight Out of a Fantasy Novel. Honestly, we're sick of hearing about the planet's freaking natural beauty. 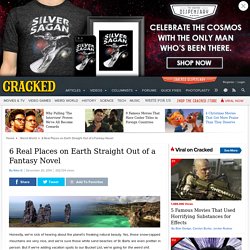 10 Mysteries Of Our World That Science Finally Solved. Our World Scientists have been baffled for years by the mysteries of our world, from giant movements under the ocean to how the oceans themselves originated. 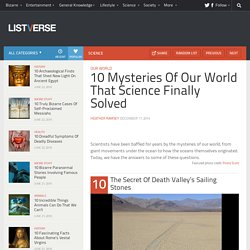 Today, we have the answers to some of these questions. 10The Secret Of Death Valley’s Sailing Stones Fron the 1940s till recently, the Racetrack Playa, a dry lake bed with a flat surface in Death Valley National Park, was the setting for a “sailing stones” mystery that left people scratching their heads. With years or even decades between each occurrence, an unseen force appeared to move hundreds of rocks across the ground at the same time, leaving long parallel trails in the dried mud. No one had even seen the stones in motion as far as scientists knew.

It could have been a decade or more before anything happened, but they got lucky. 10 Amazing Historical Conflicts That Are Completely Forgotten. History While some wars and skirmishes stand out and are immortalized in television, art, and film, history is full of thousands of fascinating conflicts that most have never heard about. 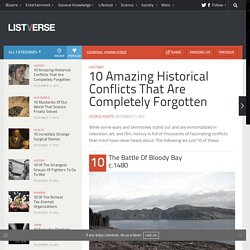 18 Sci-Fi Locations That Exist in the Real World. 12 Reasons Robots Will Always Have An Advantage Over Humans. 11 Fan Theories That Are Better Than The Actual Story. Kinja is in read-only mode. 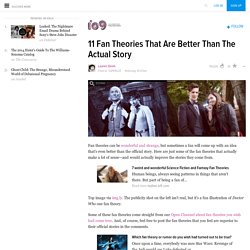 We are working to restore service. Skyfall refutes the notion by showing us the headstone of Bond's parents, who both have the surname "Bond," but it's fun to think that MI6 keeps conferring the same identity on spies over and over again, and forcing them all to order the same signature drink. 10 Strange 'Lord Of The Rings' Facts That The Films Leave Out. Books Thanks to Peter Jackson’s blockbuster films, the world knows plenty about the struggles of Gandalf, Aragorn, and Frodo. 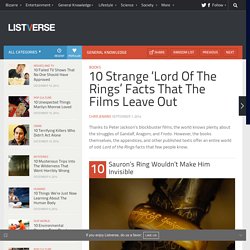 However, the books themselves, the appendices, and other published texts offer an entire world of odd Lord of the Rings facts that few people know. 10 Nearly Perfect Movies, And What They Teach Us About Storytelling. Kinja is in read-only mode. 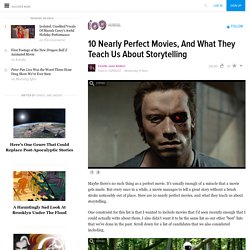 We are working to restore service. Another one I think should have been included: Raiders of the Lost Ark Expand It's the way it flows, you get the setup with stuff like Indy meeting the government guys, laying out the mission, the stakes of the Ark and stuff. 10 Most Important Science Fiction Books About Superintelligence. The 4 Reasons We Fall in Love With a Piece of Pop Culture. In ancient times, a trip to the video store was all it took to see that people love to arrange stuff in categories, and so it is today as well -- if it exists, and particularly if it exists in the world of arts or entertainment, we've broken it down into groups based on even the most trivial differences. 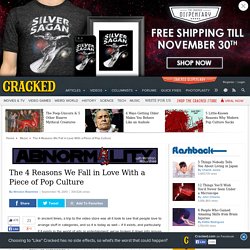 Play your guitar in a slightly different way and you're sent careening into an entire other genre with its own set of rules and misconceptions. 7 Worldbuilding Tropes Science Fiction and Fantasy needs to Stop using. How to Write an Omniscient Narrator If You're Not Actually Omniscient Yourself. How to Write Descriptive Passages Without Boring the Reader or Yourself. The Difference Between Good Worldbuilding And Great Worldbuilding. How To Balance An RPG. What Is the Best Justification for a Plot Twist That You've Ever Seen? How to Turn an Old Aquarium into a Cloud Tank and Create Creepy Alien Atmosphere Effects « Props & SFX. Need some creepy visual effects for your alien flick, but don't want to spend a bunch of money? 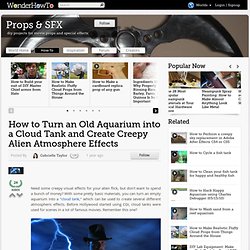 With some pretty basic materials, you can turn an empty aquarium into a "cloud tank," which can be used to create several different atmospheric effects. Before Hollywood started using CGI, cloud tanks were used for scenes in a lot of famous movies. Remember this one? Image via blogspot.com Besides Raiders of the Lost Ark, cloud tanks also helped make some wonderful non-CGI effects in Independence Day, Close Encounters of the Third Kind, The Neverending Story, and Poltergeist. How to Make Realistic Fluffy Cloud Props from Things Around the House « Props & SFX. If you need a cloudy background for a photo or video, you can always turn an old aquarium into a DIY cloud tank. 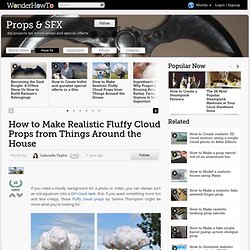 But, if you want something more fun and less creepy, these fluffy cloud props by Serena Thompson might be more what you're looking for. Images via typepad.com All you need is some balloons, tape, flour, newspaper, and a bunch of pillow stuffing. Serena made them by taping balloons together and applying a mixture of water and flour, then covering the balloons in strips of newspaper. Image via typepad.com Once they dried, she used a spray adhesive to attach the stuffing all over the outside. 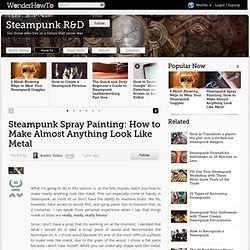 This can especially come in handy in Steampunk, as most of us don't have the ability to machine brass. We do, however, have access to wood, PVC, and spray paint. How to Make a cardboard replica prop of any gun « Props & SFX. How to Build your suit of DIY Master Chief armor from Halo « Props & SFX.