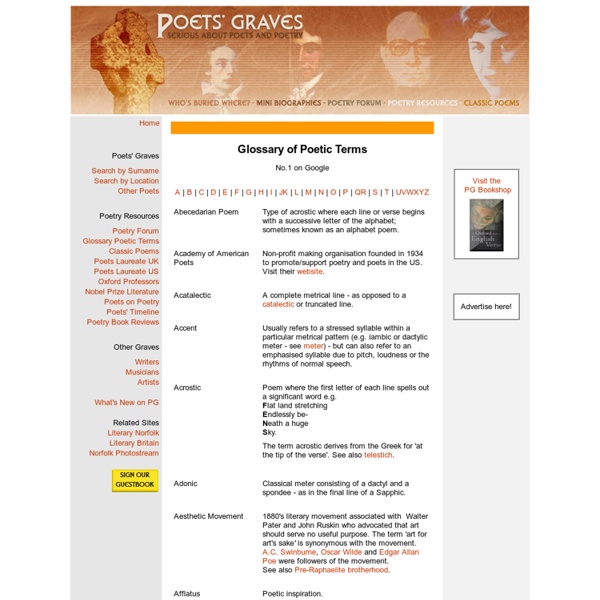 Where a poem makes reference to another poem or text. For example, the 14th line of The Prelude by William Wordsworth 'The earth was all before me' alludes to one of the final lines of Paradise Lost by John Milton 'The world was all before them'. Paradise Lost, in turn, alludes to the story of Adam and Eve in Genesis. A poem containing multiple allusions is The Waste Land by T.S.Eliot which makes reference to lines written by Shakespeare, Milton, Spenser, Verlaine, Baudelaire, Marvell, Dante, Webster, St. Augustine, Goldsmith, Ovid etc. Allusion should not be confused with plagiarism.See also intertextuality.

Poets.org - Poetry, Poems, Bios & More Alliteration, assonance, emotive language, colloquial, slang, jargon, neologism, cliché, rhetorical questions, Required skills and knowledge - language features and techniques, Skills by mode: reading and writing, English Skills Year 9, NSW | Online Educa Alliteration Alliteration is the repetition of consonant sounds at the start of a word: Alliteration is used to link two or more words (and ideas) together. You will usually find examples of alliteration in poetry. Assonance Assonance is the repetition of a vowel sound. Assonance is used to link two or more words (and ideas) together. Onomatopoeia Onomatopoeia is a word that imitates or suggests the source of the sound that it describes. Emotive language Emotive language is language (in particular adjectives or adverbs) that relate to or refer to emotions: Composers use emotive language to create empathy. See Animation Colloquial language Colloquial language is language that is informal. Slang Slang includes informal (or casual) words that are made up and used by cultural groups: G'day, Mate - Australian slang for good morning Wicked air, bro - Skateboarding slang for getting high in the air barbie - Australian slang for barbecue crook - Australian slang for being sick Jargon Neologism Cliché

Glossary Acatalectic see Catalectic Accent (Latin, ‘song added to speech’) A stressed syllable or ictus. Accentual verse Lines whose rhythm arises from its stressed syllables rather than from the number of its syllables, or from the length of time devoted to their sounding. Accentual-syllabic verse Lines whose rhythm arises by the number and alternation of its stressed and unstressed syllables, organized into feet. Acephalous (Greek, ‘headless’) A line of verse without its expected initial syllable. Acrostic (Greek, ‘at the tip of the verse’) A word, phrase, or passage spelled out vertically by the first letters of a group of lines in sequence. Leave writing plays, and choose for thy command Some peaceful province in acrostick land: There thou may'st wings display, and altars raise, And torture one poor word ten thousand ways. See also Telestich. Action poetry Verse written for performance by several voices. Adonic Aesthetic Movement Alcaics Alexandrine Allegory (Greek, ‘speaking otherwise’) Alliteration Allusion Bob

Glossary of Rhetorical Terms | Modern and Classical, Languages, Literatures and Cultures A Glossary of Rhetorical Terms with Examples This glossary came to us from our late colleague Ross Scaife, who encountered it during his graduate studies at the University of Texas. Chris Renaud gave it to him, stating that it originated with Ernest Ament of Wayne State University. Ross, in turn, added some additional examples. Socrates: The fact is, as we said at the beginning of our discussion, that the aspiring speaker needs no knowledge of the truth about what is right or good... Phaedrus: That is what those who claim to be professional teachers of rhetoric actually say, Socrates. --Plato, Phaedrus 272 Note: There are a few links below to Perseus. Alliteration: repetition of the same sound beginning several words in sequence. *Let us go forth to lead the land we love. *Viri validis cum viribus luctant. *Veni, vidi, vici. Anacoluthon: lack of grammatical sequence; a change in the grammatical construction within the same sentence. *Senatus haec intellegit, consul videt; hic tamen vivit.

Writing About Poetry Summary: This section covers the basics of how to write about poetry. Including why it is done, what you should know, and what you can write about. Contributors:Purdue OWLLast Edited: 2010-04-21 08:27:54 Writing about poetry can be one of the most demanding tasks that many students face in a literature class. Poetry, by its very nature, makes demands on a writer who attempts to analyze it that other forms of literature do not. What's the Point? In order to write effectively about poetry, one needs a clear idea of what the point of writing about poetry is. So why would your teacher give you such an assignment? To help you learn to make a text-based argument. What Should I Know about Writing about Poetry? Most importantly, you should realize that a paper that you write about a poem or poems is an argument. What Can I Write About? Theme: One place to start when writing about poetry is to look at any significant themes that emerge in the poetry. Genre: What kind of poem are you looking at?

PoemHunter.Com - Thousands of poems and poets. Poetry Search Engine Glossary of Poetic Terms from BOB'S BYWAY featuring: Phonetic pronunciation Cross references Broad range of definitions Numerous examples A wealth of poetic quotations Writers' guidelines Hyper-linked keywords & cross references plus Sidelights Informative glimpses beyond the definitions For the recommended Alphabetic Page Version, select a letter below If you prefer, you can go to the Entire Glossary Version. I am not so lost in lexicography as to forget that words are the daughters of earth, and that things are the sons of heaven. -- Samuel Johnson, in the preface to his Dictionary Last modified on March 14, 2016 Glossary of Poetic Terms from BOB'S BYWAY Copyright © 1996 - 2016, by Robert G. rgshubinski@poeticbyway.com Privacy Policy