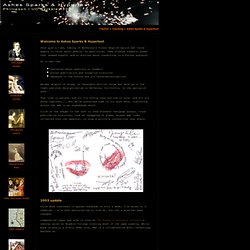 In particular, they studied romantic poems that seemed hopeful and/or worried about connecting to a future audience. So it was that fantasies about auditors or readers actual publication and reception histories openness to the future and its recontextualizations became objects of study, as venerable British verse was held up to the light and even data-projected in Berkeley, California, in the spring of 2000. That time is passed, and all its aching joys are now no more, and all its dizzy raptures.... Click on the images to the left to read standout one-page essays, trace publication histories, look at remapping of poems, browse web links collected over the semester, or scan a politely contentious chat board. 2003 update Comparative types may wish to look at The Romantic Audience Project, a seminar given at Bowdoin College covering much of the same reading.

Ferdowsi Shahnameh Introduction. Rubaiyat Illustrations. The Rubáiyát of Omar Khayyám, as translated by Edward FitzGerald, was first published in 1859 and subsequently illustrated more times perhaps than any other book. 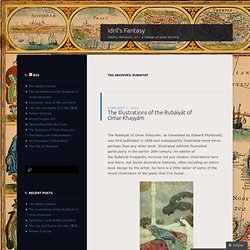 Illustrated editions flourished particularly in the earlier 20th century. An edition of the Rubáiyát frequently involves not just random illustrations here and there, but lavish decorative features, often including an entire book design by the artist. So here is a little taster of some of the nicest illustrators of the poem that I’ve found… Edmund Dulac (1882-1953) The ultimate fairy tale master, Edmund Dulac must be one of the most influential and purely gorgeous illustrators around. Willy Pogany (1882-1955) Originally Hungarian, Pogany’s illustration here shows a greater interest in realism in the human figures and a desire for a striking pastel atmosphere. René Bull (1872-1942) Hossein Behzad (1894-1968) Elihu Vedder (1836-1923) Arthur Szyk (1894-1951) Charles Robinson (1870–1937) Adelaide Hanscom (1875-1931) “himmapaan” 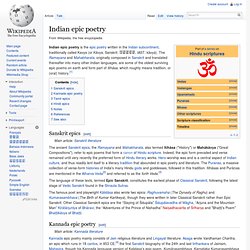 The Ramayana and Mahabharata, originally composed in Sanskrit and translated thereafter into many other Indian languages, are some of the oldest surviving epic poems on earth and form part of itihāsa, which roughly means tradition, or (oral) history.[1] Sanskrit epics[edit] The ancient Sanskrit epics, the Ramayana and Mahabharata, also termed Itihāsa ("History") or Mahākāvya ("Great Compositions"), refer to epic poems that form a canon of Hindu scripture. 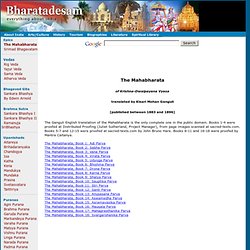 The Bhagavad Gita (Arnold translation) Epigram on Homer. English Poetry 1579-1830. An Essay on Criticism. Sigurd the Volsung - Morris. The Epic: an Essay, by Lascelles Abercrombie. Poetry: Poems by the classic masters. What Is a Poem? Coleridge on Science vs. Romance, 1817. By Maria Popova “It is discriminated by proposing to itself such delight from the whole as is compatible with a distinct gratification from each component part.” 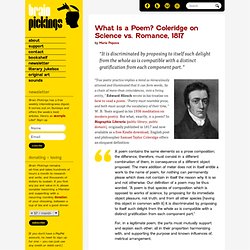 “True poetic practice implies a mind so miraculously attuned and illuminated that it can form words, by a chain of more-than coincidences, into a living entity,” Edward Hirsch wrote in his treatise on how to read a poem. “Poetry must resemble prose, and both must accept the vocabulary of their time,” W. B. Nature in the Poetry of William Wordsworth and William Blake. In the history of English literature, Romantic poetry is impressive for its several distinctive features, one of which is its intense involvement with and enthusiasm in Nature. 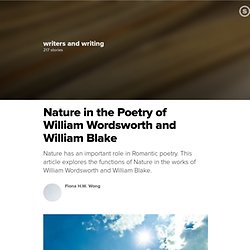 The role of Nature is prominent in Romantic poetry, whereas, however, it acts as the inspiring, smoothing and enlightening agent to zealous nature lover William Wordsworth, it only serves as an assistant to William Blakes overwhelming imaginative poetry. William Wordsworth: the Poet of Nature Wordsworth is renowned as the poet of nature. The primary concern of his poems is to appreciate the sublime beauty of Nature, to search for the union between the mind and Nature, and to acquire aspiring insights by embracing Nature. He does not simply depict an accurate picture of the pleasant environment; instead, he emphasises the interaction and union of man with Nature.

Among his illuminating poems, Lines Written in Early Spring introduces his fundamental attitude towards Nature. That in this moment there is life and food. David Foster Wallace on Ambition. The Poetry of Science.