Alfred Hitchcock - The Master of Suspense 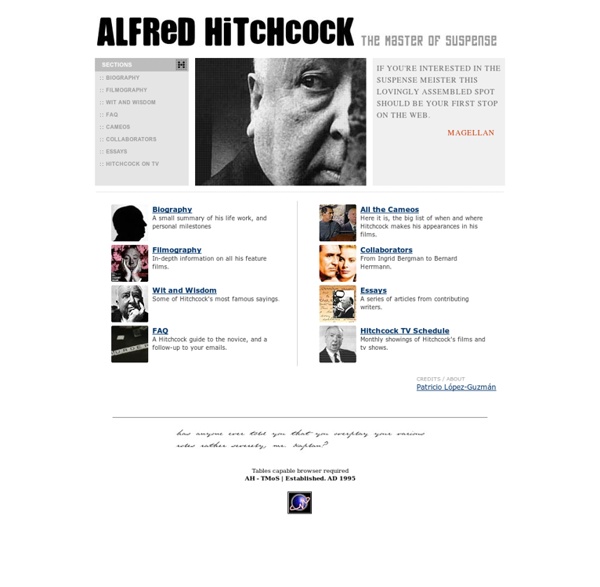 What is parallel editing, cross cutting? Home >> Editing >> Parallel Editing Parallel editing (cross cutting) is the technique of alternating two or more scenes that often happen simultaneously but in different locations. If the scenes are simultaneous, they occasionally culminate in a single place, where the relevant parties confront each other. The clip below is from The Silence of the Lambs (1991). It is one of the most famous occurrences of cross cutting in American cinema. It happens in the film's third act and spoils a big surprise, so if you haven't seen the movie and if you don't like spoilers, watch the film first.

Film Studies For Free: On 'Affect' and 'Emotion' in Film and Media Studies Emotion is a phenomenon that, according to [Sergei] Eisenstein, "is completely identical with the primary phenomenon of cinema. [In cinema] movement is created out of two motionless cells. Here, a movement of the soul, i.e. emotion (from the Latin root motio = movement), is created out of the performance of a series of incidents." ([Towards a Theory of Montage] 145, emphasis in original). Properly structured as a series of uncompleted incidents, montage calls on us to finish the actions mentally, and for Eisenstein this internal movement of filling in the gaps is emotion, a movement of the soul.

Thriller and Suspense Films Thriller and Suspense Films: These are types of films known to promote intense excitement, suspense, a high level of anticipation, ultra-heightened expectation, uncertainty, anxiety, and nerve-wracking tension. Thriller and suspense films are virtually synonymous and interchangeable categorizations, with similar characteristics and features. If the genre is to be defined strictly, a genuine thriller is a film that rentlessly pursues a single-minded goal - to provide thrills and keep the audience cliff-hanging at the 'edge of their seats' as the plot builds towards a climax. The tension usually arises when the main character(s) is placed in a menacing situation or mystery, or an escape or dangerous mission from which escape seems impossible. Life itself is threatened, usually because the principal character is unsuspecting or unknowingly involved in a dangerous or potentially deadly situation. Thrillers are often hybrids - there are lots of varieties of suspense-thrillers:

Explore the Cinematic Techniques Steven Spielberg Used in 'Raiders of the Lost Ark' Director Steven Soderbergh recently removed the color from Steven Spielberg's Raiders of the Lost Ark to explore the film's staging, and here to provide us with more educational treasures is editor Vashi from Vashi Visuals, who shared a number of his own videos that break down some of the techniques used by Spielberg. In this video, Vashi explores how Spielberg uses only 12 shots to effectively and interestingly introduce the audience to the film's hero, Indiana Jones -- without the use of dialog. We've all heard the unofficial golden rule of filmmaking "Show, don't tell" -- try not to use dialog and exposition to tell your story if you can use cinematography and visuals -- or at least as much as you can (not hating on dialog here).

The Occult Symbolism of Movie "Metropolis" and It's Importance in Pop Culture Fritz Lang’s 1927 movie “Metropolis” is one of those timeless classics that withstand the test of time. Rather than becoming forgotten and obsolete, “Metropolis” is increasingly relevant as many of its predictions are becoming reality. We will look at the underlying occult message of the film and the usage of its imagery in the acts of pop stars such as Lady Gaga, Madonna, Beyonce, Kylie Minogue and others. Metropolis is a silent science-fiction movie released in 1927 by Fritz Lang, a master of German Expressionism.

Short Story Suspense Using the Genre Approach to Teaching Suspense Short Story Writing Cara Gavan “We come to our old analogy of the bomb. Cross-cutting Suspense may be added by cross-cutting. It is built through the expectations that it creates and in the hopes that it will be explained with time. Cross-cutting also forms parallels; it illustrates a narrative action that happens in several places at approximately the same time. For instance, in D.W.

The Kuleshov Experiment Home >> Editing >> The Kuleshov Experiment In the dawn of the 20th century, cinema was a new art form, comprising many techniques that hadn’t been developed. And the ones that had had not been studied to the needed extension. A one-of-a-kind marketplace from Steven Soderbergh. - Extension 765 (Note: This posting is for educational purposes only.) I’m assuming the phrase “staging” came out of the theatre world, but it’s equally at home (and useful) in the movie world, since the term (roughly defined) refers to how all the various elements of a given scene or piece are aligned, arranged, and coordinated. In movies the role of editing adds something unique: the opportunity to extend and/or expand a visual (or narrative) idea to the limits of one’s imagination—a crazy idea that works today is tomorrow’s normal. I value the ability to stage something well because when it’s done well its pleasures are huge, and most people don’t do it well, which indicates it must not be easy to master (it’s frightening how many opportunities there are to do something wrong in a sequence or a group of scenes. Minefields EVERYWHERE.

VCE Media, VELS Media, Media Arts, digital literacy, media education, filmmaking Want to create nail-biting suspense? Want your audience hanging on tenterhooks? Brett Lamb looks to the experts to gather some tips and techniques for creating edge-of-your-seat tension in Dial S for Suspense. Alfred Hitchcock, the master of suspense, once famously explained the feeling by describing a bomb underneath a table. If the bomb explodes, the audience is given a shock. In a suspense film, however, the audience knows there’s a bomb underneath the table.