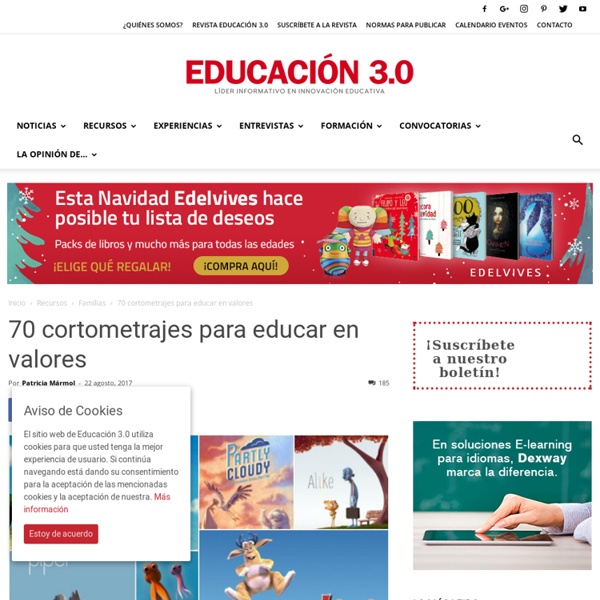 ESL Lesson PLan: Movie/Film Extra Movie Activities: Crossword: Reviews movie vocabulary. Movie Cloze: Reviews movie vocabulary. Movie Word Search: Reviews movie vocabulary. Movie Survey Activity: Good walk and talk exercise. An updated look at my classroom – My generation of polyglots Back in 2013 I published a photo essay about how I use the physical space of my classroom. Three years later a lot is still the same, but a few things have changed. First here is an animated gif panning around my classroom: One of the biggest changes over the past three years is the size of my classroom library. Cooperative Learning: 7 Free Jigsaw Activities for Your Students Introduction When it comes to cooperative learning techniques, I was surprised to learn that the jigsaw strategy has been used for over 30 years in the classroom. Additionally, studies indicate that the use of this strategy increases positive educational outcomes and reduces racial conflict. If you haven't had a chance to use the jigsaw strategy, I would highly recommend it. Just as in a jigsaw puzzle, each piece--each student's part--is essential for the completion and full understanding of the final product. If each student's part is essential, then each student is essential.

5 great zero preparation lesson ideas When the pressure is on and there are only so many hours on the week, you need a repertoire of zero preparation go-to activities which promote input and/or practice. Here are five you might well find useful. 1. My weekend

Life, Animated - Wikipedia Upon its release the film received rave reviews from critics and won numerous awards including National Board of Review award for Best Documentary and the Sundance Film Festival award for Best Direction, and was nominated for the Academy Award for Best Documentary Feature category at the 89th Academy Awards, but lost to O.J.: Made In America.[3][4][5] Content[edit] Owen Suskind was a boy of considerable promise, until he's diagnosed with autism at the age of 3. As Owen withdrew into his silent state, his parents almost lost hope that he would find some way to meaningfully interact with his world. However, that way was found through animated films, especially those Walt Disney Pictures, which provided Owen a way to understand the world through its stories to the point of creating his own.

Singlehood Singlehood is usually defined as the state of being unmarried. However, the term also applies to having no romantic partner. Some people may assume that to be single means to be unhappy. However, some people prefer to live a single life and find many advantages to it. Others choose to stay single after being divorced or widowed. On the other hand, some people are not single by choice and would like to find a partner with which to share their life.

Optimizing Immersion Every so often someone asks: how do I teach TPRS from an “uncooperative” textbook? Like, one that has massive lists of vocabulary? I had to do this in the past with Buen Viaje (al Infierno), and this is how I did the organization work before starting the year. Kagan Cooperative Learning - Frequent Questions Teachers can do successful cooperative learning, working around furniture that is bolted to the floor! Probably my most challenging experience in releasing the power of cooperative learning was in India. In some classrooms, there were over seventy students per class in rooms much smaller than what is common in Europe or the USA! There was no space at all for a teacher to move among the students; the classrooms were literally packed with students. Nevertheless, we could form groups of four and do most of the structures.

25 awesome apps for teachers, recommended by teachers What are the best apps for teachers? We asked TED-Ed Innovative Educators and the TED-Ed community. Below, 25 awesome apps recommended for teachers, by teachers. For teaching students how to present, create and code TED-Ed More than 250,000 teachers use TED education tools to spark student curiosity and explore presentation literacy skills. “TED-Ed is an outstanding resource in my classroom,” says TED-Ed Innovative Educator Jennifer Hesseltine. Ron Suskind - Wikipedia Ronald Steven "Ron" Suskind[1] (born November 20, 1959)[2] is an American journalist and author. He was the senior national affairs writer for The Wall Street Journal from 1993 to 2000, where he won the 1995 Pulitzer Prize for Feature Writing four articles that became the starting point for his first book, A Hope in the Unseen. His other books include The Price of Loyalty, The One Percent Doctrine, The Way of the World, Confidence Men, and his memoir Life, Animated: A Story of Sidekicks, Heroes, and Autism. Suskind has written about the George W. Bush Administration, the Barack Obama Administration, and related issues of the United States' use of power. Life and career[edit]

90% TL: just do it! – En français, SVP! (Just so we’re clear, I stole the title of this blog post from Thomas Sauer, not Nike.) Well, it’s spring break here, which means that my French ones have been through 3 1/2 weeks of “only” speaking French in class. I will clarify that before that, they did speak French, but there weren’t explicit rules for how much. A quick look at logistics: If you’re in the classroom, you’re expected to only be speaking French.If you need to ask a complex question/absolutely have to say something in English, you have to go out into the hallway. (This deters students from trying to speak a lot of English, because, well, they don’t want to walk there.)I tally “points” on my clipboard – if you speak English, you “lose points” (please keep in mind that in my class, participation happens à la “Whose Line” – the points don’t actually matter)If I get a TON of blank stares and I’ve explained something in more than one way, I step into the hall to clarify in English.