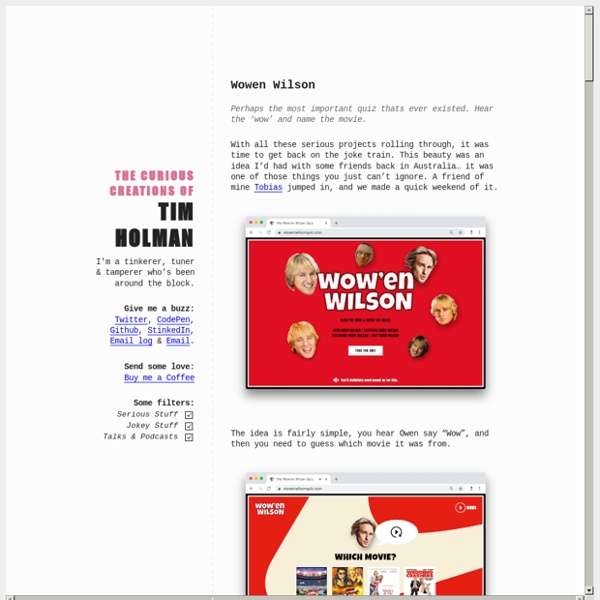 iPad Simulator Please How would you rate us? CrapAwesome If you are having issues on "slide to login", double click the slider button Please show your support for our hosting fee by clicking on some ads. Thanks 3D Printed Reaction Diffusion Patterns Reaction diffusion system are widely studied and researched because their are argued to be linked to the chemical / biological processes that are responsible for pattern formation in nature (zebra stripes, leopard spots, etc). In addition, reaction diffusion systems exhibit beautiful motion when simulated and visualized. The gifs above showcase different growth patterns and oscillations in RD systems. To see more gifs, go here: In simple terms, reaction diffusion systems model how one or more substances (i.e. gases or liquids) change and/or combine when mixed in a container.

The Making of "The Aviator": Animating a Basic 3D Scene with Three.js A tutorial that explores the basics of creating animated 3D scenes using Three.js. View demo Download source Today, we are going to create a simple 3D flying plane using Three.js, a 3D library that makes WebGL simpler. WebGL is a pretty unknown world for many developers because of the complexity and syntax of GLSL. Free ebooks On August 26 2020, the Project Gutenberg website underwent some major changes. These changes had been previewed since early 2020, and visitors to the old site were invited to try the new site, including giving input via a brief survey. The old site is no longer available.

Livecodelab What's this? This is a toy live coding environment: programs run immediately as they are typed. Pick something from the "Demos" menu or try the tutorials. Want more info? See the intro or the docs NeHe Three.js tutorials Introduction To render amazing 3D scenes, nowadays no more plugins or additional installations are required. The most widespread Browsers like Chrome, Firefox, Safari, Opera and Internet Explorer support WebGL, the hardware accelerated OpenGL for browser. Learning pure WebGL from scratch is hard. So, why don't use a library which wraps WebGL and is easy to use? Three.js is what you are searching for.

Why Warp Drives Aren't Just Science Fiction Astrophysicist Eric Davis is one of the leaders in the field of faster-than-light (FTL) space travel. But for Davis, humanity's potential to explore the vastness of space at warp speed is not science fiction. Davis' latest study, "Faster-Than-Light Space Warps, Status and Next Steps" won the American Institute of Aeronautics and Astronautics' (AIAA) 2013 Best Paper Award for Nuclear and Future Flight Propulsion. TechNewsDaily recently caught up with Davis to discuss his new paper, which appeared in the March/April volume of the Journal of the British Interplanetary Society and will form the basis of his upcoming address at Icarus Interstellar's 2013 Starship Congress in August. [Super-Fast Space Travel Propulsion Ideas (Images)] "The proof of principle for FTL space warp propulsion was published decades ago," said Davis, referring to a 1994 paper by physicist Miguel Alcubierre.

SOLID Development Principles – In Motivational Pictures I found the Motivator this morning. It lets you create your own motivational pictures. So, here’s my first run at creating the SOLID software development principles in motivational picture form. I ‘borrowed’ the images from google image search results. I hope you find them to be as fun as I do! eclectic excerpts delivered to your email every day from editor Richard Vague Today's encore selection -- from Quantum: Einstein, Bohr, and the Great Debate about the Nature of Reality by Manjit Kumar. Albert Einstein (1879-1955), the physicist who developed the theory of relativity, was born and spent his earliest years in Germany: " 'The people of Ulm are mathematicians' was the unusual medieval motto of the city on the banks of the Danube in the south-western corner of Germany where Albert Einstein was born. It was an apt birthplace on 14 March 1879 for the man who would become the epitome of scientific genius. The back of his head was so large and distorted, his mother feared her newborn son was deformed. Later he took so long to speak that his parents worried he never would.

blog Travel Time API — Amazon vs. Microsoft public transit times The awesome part about working at a startup is that I get to play with all the neat technology that the rest of the team puts together. One such example is the Travel Time API, which is used to calculate actual travel times (via multiple modes of transportation) from one origin to many destinations. The resulting map of how far one can get via public transit and walking from the centers of Amazon (left) and Microsoft (right) tech headquarters within 25 minutes.