The Visual Display of Quantitative Information 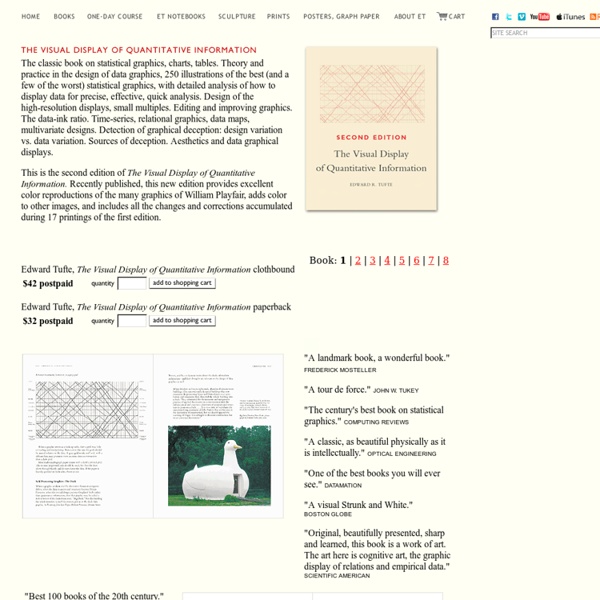 "A landmark book, a wonderful book." FREDERICK MOSTELLER "A tour de force." JOHN W. TUKEY "The century's best book on statistical graphics." "A classic, as beautiful physically as it is intellectually." "One of the best books you will ever see." "A visual Strunk and White." "Original, beautifully presented, sharp and learned, this book is a work of art.

37 Data-ish Blogs You might not know it, but there are actually a ton of data and visualization blogs out there. I'm a bit of a feed addict subscribing to just about anything with a chart or a mention of statistics on it (and naturally have to do some feed-cleaning every now and then). In a follow up to my short list last year, here are the data-ish blogs, some old and some new, that continue to post interesting stuff. Data and Statistics By the Numbers - Column from The New York Times visual Op-ed columnist, Charles Blow, who also used to be NYT's graphics director.Data Mining - Matthew Hurst, scientist at Microsoft's MSN, also the co-creator of BlogPulse.Statistical Modeling - We might disagree on certain things, but Andrew's blog is one of the few active pure statistics blogs.The Numbers Guy - Data-minded reporting from Carl Bialik of the Wall Street Journal.Basketball Geek - Like statistical analysis and basketball? Statistical/Analytical Visualization

15 examples Data Visualization is a method of presenting information in a graphical form. Good data visualization should appear as if it is a work of art. This intrigues the viewer and draws them in so that they can further investigate the data and info that the graphic represents. In this post there are 15 stunning examples of Data Visualization that are true works of art.

Edward Tufte Edward Tufte is a statistician and artist, and Professor Emeritus of Political Science, Statistics, and Computer Science at Yale University. He wrote, designed, and self-published 4 classic books on data visualization. The New York Times described ET as the "Leonardo da Vinci of data," and Business Week as the "Galileo of graphics." He is now writing a book/film The Thinking Eye and constructing a 234-acre tree farm and sculpture park in northwest Connecticut, which will show his artworks and remain open space in perpetuity. He founded Graphics Press, ET Modern gallery/studio, and Hogpen Hill Farms LLC. Visual Display of Quantitative Information 200 pages

The Joy of Stats About the video Hans Rosling says there’s nothing boring about stats, and then goes on to prove it. A one-hour long documentary produced by Wingspan Productions and broadcast by BBC, 2010. TreeSheets The ultimate replacement for spreadsheets, mind mappers, outliners, PIMs, text editors and small databases. Suitable for any kind of data organization, such as Todo lists, calendars, project management, brainstorming, organizing ideas, planning, requirements gathering, presentation of information, etc. It's like a spreadsheet, immediately familiar, but much more suitable for complex data because it's hierarchical. It's like a mind mapper, but more organized and compact.

10 Words You Should Remove From Your Resume Right Now Are you a "creative" and "effective" job candidate? News flash: you're also "predictable," like a lot of other applicants using these same buzzwords. LinkedIn released their annual list of the most overused buzzwords on their 187 million profile pages this week, with "creative" taking the dubious honor for the second year in a row. Words commonly used on LinkedIn are also likely to appear on resumes, meaning the list outlines the buzzwords you should be avoiding when formatting and writing your own resume. LinkedIn's top 10 repetitive words for the profiles of U.S. professionals were as follows (with some helpful translations):

Shared storage for OpenStack based on DRBD-Mozilla Firefox Storage is a tricky part of the cloud environment. We want it to be fast, to be network-accessible and to be as reliable as possible. One way is to go to the shop and buy yourself a SAN solution from a prominent vendor for solid money. Another way is to take commodity hardware and use open source magic to turn it into distributed network storage.