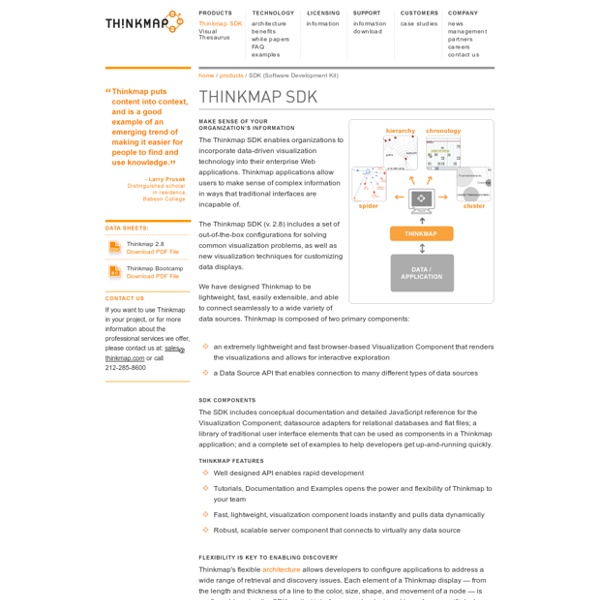 The Thinkmap SDK enables organizations to incorporate data-driven visualization technology into their enterprise Web applications. Thinkmap applications allow users to make sense of complex information in ways that traditional interfaces are incapable of. The Thinkmap SDK (v. 2.8) includes a set of out-of-the-box configurations for solving common visualization problems, as well as new visualization techniques for customizing data displays. We have designed Thinkmap to be lightweight, fast, easily extensible, and able to connect seamlessly to a wide variety of data sources. an extremely lightweight and fast browser-based Visualization Component that renders the visualizations and allows for interactive exploration a Data Source API that enables connection to many different types of data sources Thinkmap's flexible architecture allows developers to configure applications to address a wide range of retrieval and discovery issues.

RDFa, Drupal and a Practical Semantic Web In the march toward creating the semantic web, web content management systems such as Drupal (news, site) and many proprietary vendors struggle with the goal of emitting structured information that other sites and tools can usefully consume. There's a balance to be struck between human and machine utility, not to mention simplicity of instrumentation. With RDFa (see W3C proposal), software and web developers have the specification they need to know how to structure data in order to lend meaning both to machines and to humans, all in a single file. And from what we've seen recently, the Drupal community is making the best of it. Introducing RDFa RDFa is a set of XHTML attributes meant in particular to augment visual data with machine-readable hints. Actually, RDFa goes beyond this, providing somewhat of a circular benefit. RDFa, RDF, XML and XHTML Okay, too many acronyms you say? RDFa is based upon the principles of RDF. The Heart of RDF RDF in Action <? RDFa is Much Simpler Than RDF

Kartograph – rethink mapping RDFa Primer We begin the introduction to RDFa by using a subset of all the possibilities called RDFa Lite 1.1 [rdfa-lite]. The goal, when defining that subset, was to define a set of possibilities that can be applied to most simple to moderate structured data markup tasks, without burdening the authors with additional complexities. Many Web authors will not need to use more than this minimal subset. 2.1.1 The First Steps: Adding Machine-Readable Hints to Web Pages Consider Alice, a blogger who publishes a mix of professional and personal articles at 2.1.1.1 Hints on Social Networking Sites Alice publishes a blog and would like to provide extra structural information on her pages like the publication date or the title. Example 1 <html><head> ... This information is, however, aimed at humans only; computers need some sophisticated methods to extract it. Example 2 <html><head> ... (Notice the markup colored in red: these are the RDFa "hints".) Example 3 Example 4 Example 5 Example 6

StatPlanet StatPlanet (formerly StatPlanet Map Maker) is a free, award-winning application for creating fully customizable interactive maps. StatPlanet can be used to visualize location-based statistical data, such as life expectancy by country or demographic statistics and voting patterns by US state. In addition to maps, StatPlanet also has the option of including interactive graphs and charts to create feature-rich interactive infographics. If you wish to use StatPlanet for commercial purposes, please contact us. Restrictions: StatPlanet comes with only two maps: a world map (country level) and a US map (state level). It also has a limit of 5 indicators. Create an interactive map in 5 steps Open StatPlanet.exe to view the results offline, or open StatPlanet.html to view the results in a web-browser. For further details, see the StatPlanet User Guide (PDF) Create an interactive map in 5 minutes instructional video Enable macros in Excel

Describing Copyright in RDF - Creative Commons Rights Expression Language How to publish Linked Data on the Web This document provides a tutorial on how to publish Linked Data on the Web. After a general overview of the concept of Linked Data, we describe several practical recipes for publishing information as Linked Data on the Web. This tutorial has been superseeded by the book Linked Data: Evolving the Web into a Global Data Space written by Tom Heath and Christian Bizer. This tutorial was published in 2007 and is still online for historical reasons. The goal of Linked Data is to enable people to share structured data on the Web as easily as they can share documents today. The term Linked Data was coined by Tim Berners-Lee in his Linked Data Web architecture note. Applying both principles leads to the creation of a data commons on the Web, a space where people and organizations can post and consume data about anything. The Web of Data can be accessed using Linked Data browsers, just as the traditional Web of documents is accessed using HTML browsers. Literal Triples RDF Links 3.