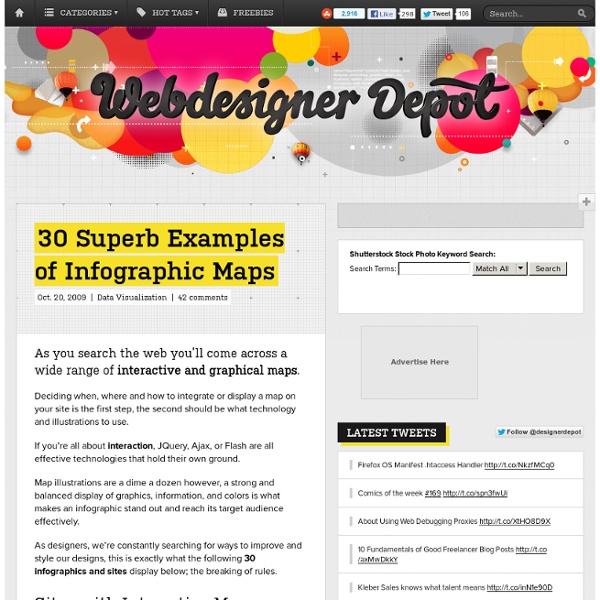 As you search the web you’ll come across a wide range of interactive and graphical maps. Deciding when, where and how to integrate or display a map on your site is the first step, the second should be what technology and illustrations to use. If you’re all about interaction, JQuery, Ajax, or Flash are all effective technologies that hold their own ground. Map illustrations are a dime a dozen however, a strong and balanced display of graphics, information, and colors is what makes an infographic stand out and reach its target audience effectively. As designers, we’re constantly searching for ways to improve and style our designs, this is exactly what the following 30 infographics and sites display below; the breaking of rules. Sites with Interactive Maps Illustrative Infographics Compiled exclusively for WDD by Liz Fulghum. Did we miss any great examples?

Deluge: How 300.000 Norwegians Move House in a Year The short animation titled "Deluge" [bengler.no] by Even Westvang reveals how public data can be analyzed to reveal potentially interesting patterns. In particular, this movie demonstrates the patterns of 300.000 Norwegians moving house, by cross-referencing the tax records of about 4 million individual Norwegians from 2006 and 2007. In the movie, the data is filtered by paramaters like yearly income or age, and a distinction is made between 'incoming' (red) and 'outgoing' (blue) citizens. As a result, one can perceive that elderly people generally move over relatively short distances, while high-earners tend to move out of the big cities to the shores. Interestingly, in Norway all the incomes and fortunes of all tax paying individuals are made public every year, which consists of the full name, year of birth, postal code and their attendant financial data.

Teacher to Teacher: Critical Thinking in the College Classroom This web site provides personal, practical, and published materials collected to help you cultivate critical thinking skills in your students, especially first-year students. How these materials are organized These materials are contained in 14 modules--ten focused on specific critical thinking skills, and four on specific teaching methods. Blog Archive » Time travel Map in photo above is a part of one of my final projects I did for my last school, London College of Printing (now London College of Communication). It was an attemt to redesign the London Underground map. In the beginning when I didn’t know what to do with the project, I called it “impossible mission”. How could I come up with some innovative ideas to this piece of design that is by many considered as one of the best in graphic design ever? Well, I knew couldn’t just do a normal re-design; something had to be added. I started thinking what’s different in the world now from when the map was designed and one thing that are different today is time.

1780 to 1784 Pennsylvania Maps The end of the Revolutionary War, settled by the Treaty of Paris early in 1783, resulted in many maps published that year. Maps issued in previous years with "British colonies" or similar title words were reissued in the 1780's with "United States" in the title, and few other changes. The first map of the United States 'compiled, engraved, and printed by an American' was Abel Buell's A NEW AND CORRECT MAP OF THE UNITED STATES OF NORTH AMERICA LAYD DOWN FROM THE LATEST OBSERVATIONS AND BEST AUTHORITY AGREEABLE TO THE PEACE OF 1783, published in 1784. The map is included in Schwartz & Ehrenberg and other map histories, and shows the American flag printed on a map for the first time. Read !!

My Favorite WSQ Please see the "revisited" version of this post, published in July of 2016, by clicking here.*Please read my WSQing page for more details, descriptions, and workflow* A "WSQ" (pronounced wisk) in my class is what we call "homework" in my flipped classroom. It stands for this: [read an update on the WSQ after using it for several weeks in my classroom here] W - Watch Students must watch the video for the assigned lesson and take notes in their SSS packets (this stands for "Student Success Sheets" and I have them for each unit/chapter) I have created for them.

Using Google To Map The Yellowstone Trail In Washington - AMERICAN ROAD® FORUM—the ultimate road trip planning community. Copyright AMERICAN ROAD, LLC 2006-2011 I'll be taking a two-day quick trip across Washington traveling as much as possible upon the old Yellowstone Trail. Unlike other old roads that I've traveled (Route 66, etc), there's no guide book to tell me to "turn left at crappy dirt road and hope for the best." So I had to gather some common sense, maps, hearsay, luck and prayers and map it out myself. I think I done good. But certainly not perfect.

Using Mind Maps For Creating Novels Take a word. Place that word in the center of a sheet of paper and circle it. Let the word tease your brain. Allow related ideas, words or concepts to be inspired by this word. Write down those new ideas around the word. Draw lines to connect them. burnunit / Ethereal Cartography A Republic of Desire The locus of the end points of projected desires and imagined journeys from my home(s), 1978-2009. All projections The Essayification of Everything The Stone is a forum for contemporary philosophers and other thinkers on issues both timely and timeless. Lately, you may have noticed the spate of articles and books that take interest in the essay as a flexible and very human literary form. These include “The Wayward Essay” and Phillip Lopate’s reflections on the relationship between essay and doubt, and books such as “How to Live,” Sarah Bakewell’s elegant portrait of Montaigne, the 16th-century patriarch of the genre, and an edited volume by Carl H. Klaus and Ned Stuckey-French called “Essayists on the Essay: Montaigne to Our Time.” The essayist samples more than a D.J.: a loop of the epic here, a little lyric replay there, all with a signature scratch on top. It seems that, even in the proliferation of new forms of writing and communication before us, the essay has become a talisman of our times.

Liked the graphic and colorful elements here by dpvagabond Jun 24