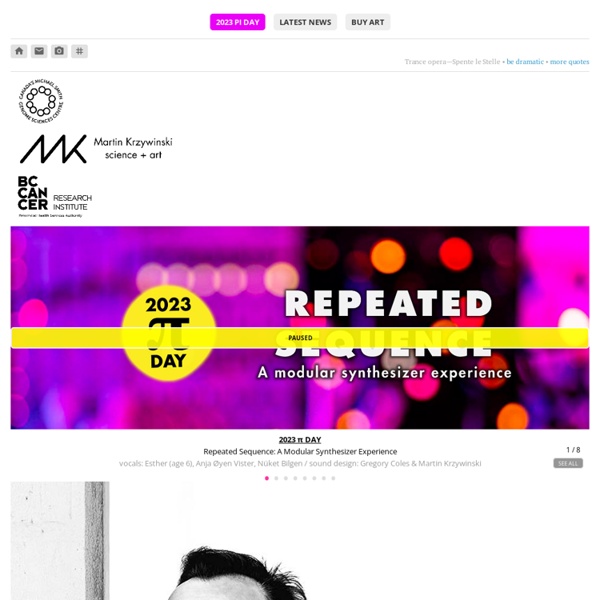 The art of Pi (`pi`), Phi (`phi`) and `e` // Martin Krzywinski / Genome Sciences Center ▲ 2013 day ▲ 2014 day ▲ 2015 day ▲ 2014 approx day ▲ Circular art This section contains various art work based on , and that I created over the years. day art and approximation day art is kept separate. All of the posters are listed in the posters section. Circular and spiral art based on the digits of , and . Read about how they were made and browse through the posters. Some of the art shown here has been featured in a Numberphile video. Fri 10-07-2015 The Jurassic World Creation Lab webpage shows you how one might create a dinosaur from a sample of DNA. ▲ We can't get dinosaur genomics right, but we can get it less wrong. With enough time, you'll grow your own brand new dinosaur. What went wrong? ▲ Corn World: Teeth on the Cob. Thu 11-06-2015 I was commissioned by Scientific American to create an information graphic based on Figure 9 in the landmark Nature Integrative analysis of 111 reference human epigenomes paper. ▲ Network diagram redesign of the heatmap for a select set of traits.

VIZBI - Visualizing Biological Data Widget sizing Overview In the spirit of HTML widgets working just like plots in R, it’s important that HTML widgets intelligently size themselves to their container, whether it be the RStudio Viewer, a figure in knitr, or a UI panel within a Shiny application. The htmlwidgets framework provides a rich mechanism for specifying the sizing behavior of widgets. This sizing mechanism is designed to address the following constraints that affect the natural size of a widget: The kind of widget it is. Some widgets may only be designed to look good at small, fixed sizes (like sparklines) while other widgets may want every pixel that can be spared (like network graphs).The context into which the widget is rendered. Widget sizing is handled in two steps: First, a sizing policy is specified for the widget. Specifying a sizing policy The default HTML widget sizing policy treats the widget with the same sizing semantics as an R plot. Examples The networkD3 package uses custom sizing policies for all of its widgets.

Why Are Data-Viz Designers So Obsessed With Circles? In 1726, Filippo Juvarra put the finishing touches on the dome of the Basilica of Superga, an intricately designed church in Turin, Italy. The artist painted the interior roof of the building with a kaleidoscopic pattern that when paired with the dome’s ring of windows creates the effect of ornate, concentric circles. Nearly 300 years later, in the French town of Cessy, engineers finished building the Compact Muon Solenoid, a massive particle detector that, when viewed in cross-section, bears a striking resemblance to Juvarra’s circular basilica dome. “These things look so similar, and yet they’re separated by 300 years,” says Manuel Lima. In his new book, Lima attempts to find out. Lima began thinking about the book in 2011 after he was asked a confounding question during a presentation he was giving on Visual Complexity. From a psychological perspective, the circle represents happiness, unity, perfection, and wholeness.

Data Visualization: Modern Approaches About The Author Vitaly Friedman loves beautiful content and doesn’t like to give in easily. When he is not writing or speaking at a conference, he’s most probably running … More about Vitaly Friedman … Data presentation can be beautiful, elegant and descriptive. There is a variety of conventional ways to visualize data - tables, histograms, pie charts and bar graphs are being used every day, in every project and on every possible occasion. However, to convey a message to your readers effectively, sometimes you need more than just a simple pie chart of your results. Data presentation can be beautiful, elegant and descriptive. So what can we expect? Let’s take a look at the most interesting modern approaches to data visualization as well as related articles, resources and tools. 1. Trendmap 2007 Informationarchitects.jp presents the 200 most successful websites on the web, ordered by category, proximity, success, popularity and perspective in a mindmap. 2. 3. 4. 5. 6. Visualcomplexity.com

Cameron Hummels Cosmological Evolution A simulation following the evolution of a large representative volume of the Universe from just after the Big Bang to the present day. We're looking at the projected gas density from the side of the cube, and our view follows the reference frame of the expanding Universe over this time. As you can see, initially the Universe starts out dense and uniform, but over time slight overdensities in the gas are amplified by the attractive effects of gravity to form the walls, filaments, and clusters seen here. Also note the axes scales change over time as the Universe expands by a factor of 100 between z=100 and z=0, and observe the significant drop in the general column density over that period. Disk Galaxy This is a fly-around of an output from an Enzo hydrodynamics simulation which followed the evolution of a Milky-Way-like galaxy from just after the Big Bang to present (z=99 to z=0). Lastly, the movie changes modes to displaying the stellar component of the galaxy.

Franz – a free messaging app for Slack, Facebook Messenger, WhatsApp, Telegram and more The Functional Art: An Introduction to Information Graphics and Visualization