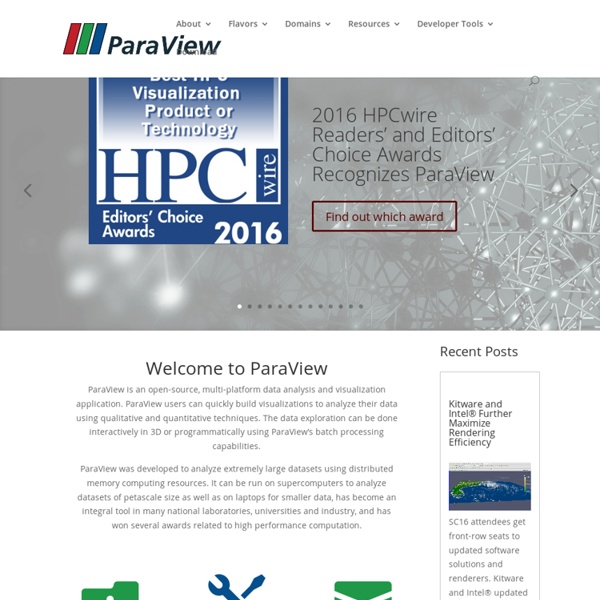 ParaView is an open-source, multi-platform data analysis and visualization application. ParaView users can quickly build visualizations to analyze their data using qualitative and quantitative techniques. The data exploration can be done interactively in 3D or programmatically using ParaView's batch processing capabilities. ParaView was developed to analyze extremely large datasets using distributed memory computing resources. It can be run on supercomputers to analyze datasets of exascale size as well as on laptops for smaller data.

Gallery "Spike" map Interactive United States population density map. Average rating: 7.5 (23 votes) 2D histogram Cytoscape: Hands-down Winner for Large-scale Graph Visualization I still never cease to be amazed at how wonderful and powerful tools are so often and easily overlooked. The most recent example is Cytoscape, a winner in our recent review of more than 25 tools for large-scale RDF graph visualization. We began this review because the UMBEL subject concept “backbone” ontology will involve literally thousands of concepts. Graph visualization software suitable to very large graphs would aid UMBEL’s construction and refinement. Cytoscape describes itself as a bioinformatics software platform for visualizing molecular interaction networks and integrating these interactions with gene expression profiles and other state data. Cytoscape is partially based on GINY and Piccolo, among other open-source toolkits.

Case study: A brief review of online visualisation tools that can help There is a growing range of online tools to help users their data. This brief review highlights four online visualisation tools that can help. The links page also links to lots more useful resources. UCINET Software UCINET 6 for Windows is a software package for the analysis of social network data. It was developed by Lin Freeman, Martin Everett and Steve Borgatti. It comes with the NetDraw network visualization tool. If you use the software, please cite it.

Protovis Protovis composes custom views of data with simple marks such as bars and dots. Unlike low-level graphics libraries that quickly become tedious for visualization, Protovis defines marks through dynamic properties that encode data, allowing inheritance, scales and layouts to simplify construction. Protovis is free and open-source, provided under the BSD License. It uses JavaScript and SVG for web-native visualizations; no plugin required (though you will need a modern web browser)! Although programming experience is helpful, Protovis is mostly declarative and designed to be learned by example. Protovis is no longer under active development.The final release of Protovis was v3.3.1 (4.7 MB).

Desktop This software has been renamed to Gapminder World Offline Because of technical problems the software on this page is no longer being maintained! Please visit Gapminder World Offline (Beta) instead. Gapminder Desktop With Gapminder Desktop you can show animated statistics from your own laptop! Introduction to Network Visualization with GEPHI New tutorial available! A completely new version of this tutorial has been published, with 2 complete and complementary datasets to learn and explore many basic and advanced features of Gephi: To the new tutorial Gephi workshop at University of Bern (photo Radu Suciu) Social Network Analysis is a lens, a way of looking at reality. (Claire Lemercier at Swiss Digital Humanities Summer School 2013) Network Analysis appears to be an interesting tool to give the researcher the ability to see its data from a new angle.

Data Wrangler UPDATE: The Stanford/Berkeley Wrangler research project is complete, and the software is no longer actively supported. Instead, we have started a commercial venture, Trifacta. For the most recent version of the tool, see the free Trifacta Wrangler. Why wrangle? Too much time is spent manipulating data just to get analysis and visualization tools to read it. Venn Templates and Venn Diagram Software - Free and no download required with Gliffy Online A Venn diagram is a simple way to represent the relationships between groups of things with a clear, visual display. Let your ideas overlap In a Venn diagram, large circles represent groups of things with a shared attribute. Areas where these circles overlap represent individuals that belong equally to both groups. For example, a Venn diagram with one circle representing things made with yeast and another representing alcoholic beverages would have an overlapping zone where you could find both beer and wine. Circles in a Venn diagram can overlap partially, overlap completely, or even be totally separate — letting the viewer see the relationship between the groups at a glance.

Free Tools to Visualize Your Data Data visualization has grown in popularity as datasets have become larger and tools have become more user-friendly. This area is eagerly being explored by researchers in a variety of disciplines. Although many people think of numbers when they consider types of data, data comes in many forms–including text! In fact, for many researchers, especially those in the humanities or social sciences, text is their primary data source. This example of a network visualization could be created using a tool like Gephi or Sci2. Image: Clickstream Data Yields High-Resolution Maps of Science.

Online Charts Builder Hohli Online Charts Builder Load From Image URL: Blog Announcement Community ~ gsoc It’s a great news, Gephi has been accepted again for the Google Summer of Code for the 5th year! The program is the best way for students around the world to start contributing to an open-source project. Since 2009, each edition is a great success and dramatically boosted Gephi’s project development. What is Gephi?

UWGB Commons for the Digital and Public Humanities “Gephi is an open-source software for visualizing and analysing large networks graphs. Gephi uses a 3D render engine to display graphs in real-time and speed up the exploration. You can use it to explore, analyse, spatialise, filter, cluterize, manipulate and export all types of graphs.”