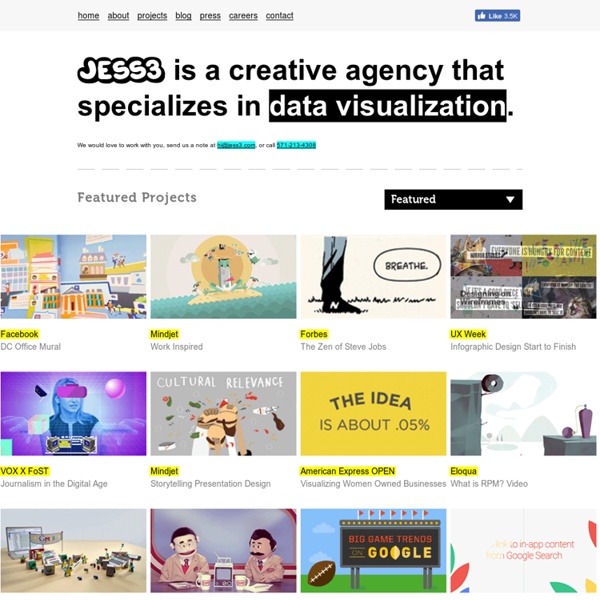 January 31, 2013 JESS3’s Coachella Infographic Featured on The Huffington Post The Huffington Post’s Los Angeles vertical spotlighted “Coachella by the Likes,” JESS3’s infographic examining Coachella’s roster by number of “Likes” each band has on Facebook. We matched the number of Facebook fans per musical act with their graphic presence on the annual Coachella lineup poster. Making use of the Facebook-liking, data-driven generation, the resulting visualization triggered insightful discoveries about the festival’s lineup. The Huffington Post used our findings to surmise whether “Coachella's iconic poster [does] justice to the most popular acts when it comes to prominence and font size.”

logTool: Revealing the Hidden Patterns of Online Surfing Behavior logTool [onformative.com] is a data visualization tool that displays your online activity, based on data from the powerful network packet sniffing tool Carnivore. By analyzing the different IP addresses and ports, the visualization is able to determine and represent what kind of application or service sends or receives the packets. Developed for the magazine Weave, logTool was used to digest the surfing behavior of several interaction designers, artists and developers. 10 Outstanding Social Media Infographics Nobody has time to read anymore, right? Every day we are all inundated with more and more information overload coming from credible and yet to be verified sources. Where can Internet users find relief? Answer: the infographic. Infographics are a wonderful mix of key data and visualization that can really bring the message home if put together correctly.

NERD COMMUNICATIONS FACTSHEET NERD COMMUNICATIONS Nerd Nerdcommunications Nerdfilms in a nutshell. Born in 2007. Mother, embassy of dreams, one of Germany's biggest advertising film-production companies. He's back! Sheen's returning to TV with new sitcom George Pimentel / Getty Images Charlie Sheen is officially coming back to TV. Lionsgate announced on July 18 that the actor will star in a new sitcom called "Anger Management." By Anna Chan, TODAY Yup, all those earlier reports you read about Charlie Sheen's return to the small screen turned out to be mostly true.

Weave Data Tutorial Weave Data TutorialTutorial for Weave Magazine 03.10 about visualizing network data Client: Weave Magazine / Page publisher We all use twitter, write emails, skype and blog all day long. Visual Literacy: An E-Learning Tutorial on Visualization for Communication, Engineering and Business Visual Cards for Collaboration and Team Creativity Making the Complex Clear Visual Literacy for Managers - How Sketching enables Visual Problem Solving and Communication (get the hardcopy edition at sketchingatwork.com) By clicking on a map or diagram thumbnail below, you can access an interactive graphic overview on tools, books, researchers in different visualization fields, as well as on key success factors of visualization. There is also an interactive organizing table that shows (incl. examples) one hundred visualization-based methods. Clicking on a particular tool, book, person, document, principle or method within a map opens the respective website or homepage in a new browser window or reveals an example (most maps were created with lets-focus).

TEENAGE MUTANT NINJA NOSES - Page 1 of 4 The mission of this blog was always simple: shine a spotlight on God’s noses. Noses are an issue that affects 99% of us. And while I won’t say that the 1% without noses are categorically evil, they are. Or Godless at the very least. To every 16 year-old begging their rich parents for a nose job…stop. You’re most likely not beautiful, but your nose is. Live map of London Underground trains Loading... Powered by Leaflet — Map tiles © Thunderforest, data © OpenStreetMap contributors. Live London Underground map The Work of Edward Tufte and Graphics Press Edward Tufte is a statistician and artist, and Professor Emeritus of Political Science, Statistics, and Computer Science at Yale University. He wrote, designed, and self-published 4 classic books on data visualization. The New York Times described ET as the "Leonardo da Vinci of data," and Business Week as the "Galileo of graphics." He is now writing a book/film The Thinking Eye and constructing a 234-acre tree farm and sculpture park in northwest Connecticut, which will show his artworks and remain open space in perpetuity.