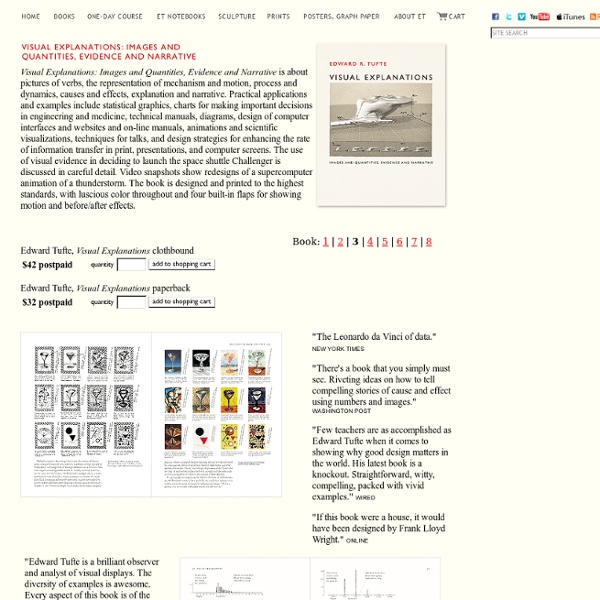 "The Leonardo da Vinci of data." NEW YORK TIMES "There's a book that you simply must see. Riveting ideas on how to tell compelling stories of cause and effect using numbers and images." WASHINGTON POST "Few teachers are as accomplished as Edward Tufte when it comes to showing why good design matters in the world. "If this book were a house, it would have been designed by Frank Lloyd Wright."

37 Data-ish Blogs You might not know it, but there are actually a ton of data and visualization blogs out there. I'm a bit of a feed addict subscribing to just about anything with a chart or a mention of statistics on it (and naturally have to do some feed-cleaning every now and then). In a follow up to my short list last year, here are the data-ish blogs, some old and some new, that continue to post interesting stuff. Data and Statistics By the Numbers - Column from The New York Times visual Op-ed columnist, Charles Blow, who also used to be NYT's graphics director.Data Mining - Matthew Hurst, scientist at Microsoft's MSN, also the co-creator of BlogPulse.Statistical Modeling - We might disagree on certain things, but Andrew's blog is one of the few active pure statistics blogs.The Numbers Guy - Data-minded reporting from Carl Bialik of the Wall Street Journal.Basketball Geek - Like statistical analysis and basketball?

Data visualization books: How to start your personal library The Excel Charts Blog There are many approaches to data visualization. Take well-know authors like Tufte, Cleveland, Ware, Few, Bertin or McCandless. There is some overlap, but they all approach data visualization from a different angle. That’s great news for you: this means that you can come up with a unique point of view that reflects your interests and needs. I suppose the books you buy are consistent with that view. Let me give you my own example.

digital natives The day’s most fascinating News, From the desk of Dave Pell Give Your Inbox Some Awesome Learn More Hot Topics: Addictomatic Addictomatic "Generative Design" – A Computational Design Guidebook - Review “The main change in the design process achieved by using generative design is that traditional craftsmanship recedes into the background, and abstraction and information become the new principal elements.” Thus reads a rather pertinent nugget of wisdom tucked into the concluding notes of Generative Design: Visualize, Program and Create with Processing, an epic computational design text by Hartmut Bohnacker, Benedikt Groß, Julia Laub and editor Claudius Lazzeroni. With that point, the authors are describing how the syntax of code and data are intrinsically tied to new modes of composition and production. This statement also speaks to the organizational logic of the book, which weighs-in at a whopping 470 pages of thoughtfully categorized generative strategies that have been broken down into bite-sized thematic walkthroughs. Purchase on Amazon.

40 must-see vídeos about data visualization and infographics Our selection of keynotes, TED Talks and interviews by some of the top names in the field (The Joy of Stats, by Hans Rolling, one of the must-see videos) After the success of our collection of data visualization presentations a few weeks ago, we decided to push even further our research of multimedia resources and take the risk of selecting some videos. The art of Pi (`pi`), Phi (`phi`) and `e` // Martin Krzywinski / Genome Sciences Center ▲ 2013 day ▲ 2014 day ▲ 2015 day ▲ 2014 approx day ▲ Circular art Why Are Data-Viz Designers So Obsessed With Circles? In 1726, Filippo Juvarra put the finishing touches on the dome of the Basilica of Superga, an intricately designed church in Turin, Italy. The artist painted the interior roof of the building with a kaleidoscopic pattern that when paired with the dome’s ring of windows creates the effect of ornate, concentric circles. Nearly 300 years later, in the French town of Cessy, engineers finished building the Compact Muon Solenoid, a massive particle detector that, when viewed in cross-section, bears a striking resemblance to Juvarra’s circular basilica dome. “These things look so similar, and yet they’re separated by 300 years,” says Manuel Lima. “One is all about religion and spirituality and the other is about science.” Lima, a design lead at Google and creator of the website Visual Complexity, was intrigued by the circle’s ubiquity.

Data Visualization: Modern Approaches About The Author Vitaly Friedman loves beautiful content and doesn’t like to give in easily. When he is not writing or speaking at a conference, he’s most probably running … More about Vitaly Friedman … Data presentation can be beautiful, elegant and descriptive. There is a variety of conventional ways to visualize data - tables, histograms, pie charts and bar graphs are being used every day, in every project and on every possible occasion.

Millennials: Confident. Connected. Open to Change. - Pew Social & Demographic Trends Executive Summary Generations, like people, have personalities, and Millennials — the American teens and twenty-somethings who are making the passage into adulthood at the start of a new millennium — have begun to forge theirs: confident, self-expressive, liberal, upbeat and open to change. They are more ethnically and racially diverse than older adults. They’re less religious, less likely to have served in the military, and are on track to become the most educated generation in American history.