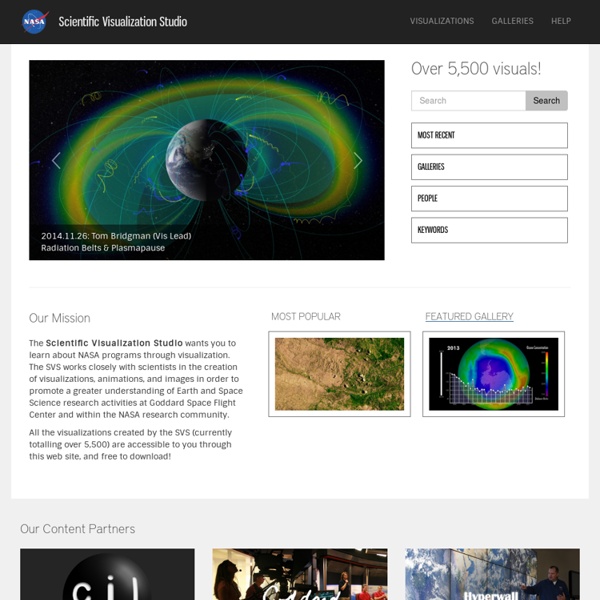 How NASA Makes Scientific Data Beautiful How do you make education interesting and, more importantly, beautiful? When it comes to the work of NASA, attracting enthusiasts isn't difficult with the usual visuals of bright stars and colorful planets on hand. Look no further than the recent awe over Mars rover Curiosity's high-res pictures to see proof of humanity's fascination with space. But not all of NASA's data is packaged into a neat little photos. The SVS is not only an active and creative tool for NASA outreach — it has even gone viral. "I think scientists have an amazing internal world — they think about these things and how they work," says Dr. Mashable spoke with Mitchell about Perpetual Ocean and how to bring beauty to educational information. How did Perpetual Ocean come about? We're tasked to visualize massive results of all kinds for the purposes of public outreach. One of those things we thought we couldn't do was anything that involved a flow field — an ocean current or wind, for example. What's next for SVS?

ROSAT Re-entry ROSAT (short for Röntgensatellit, in German X-rays are called Röntgenstrahlen, in honour of Wilhelm Röntgen) is a defunct German Aerospace Center-led satellite X-ray telescope, with instruments built by Germany, the UK and the US. It was launched on 1 June 1990, on a Delta II rocket from Cape Canaveral, on what was initially designed as an 18 month mission, with provision for up to 5 years of operation. ROSAT actually operated for over 8 years, finally shutting down on 12 February 1999. ROSAT is expected to re-enter the Earth's atmosphere between October 21 and 23 2011. (from Wikipedia) Links "Live" Stats These sites do on demand calculations of satellite position based on an observer's location and recent satellite elements (via NORAD). Guide to viewing ROSAT in Orbit Before re-entry, as with other satellites, ROSAT will be visible from occasionally depending on your location, satellite position and time of day. Re-Entry Predictions Who does this? Current Estimation FAA issues NOTAM:! Twitter

Social Media Portraits Of 11 Cities, Mapped As Digital Sunflowers In mathematics, there is a particularly beautiful equation called the Vogel Spiral. To a nonmathematical mind, the formula seems arcane and impenetrable, but give it to a programmer and they can unfurl its variables until it precisely models the interconnecting spirals that form the pattern of florets in the head of a sunflower. For years, U.K. designer Brendan Dawes has been drawn to the Vogel Spiral. In 2007, he first experimented with an Adobe Flash–based navigation system built on the algorithm. In late October last year, British mobile carrier Everything Everywhere (EE) went live with its 4G LTE service in 11 cities: London, Bristol, Birmingham, Cardiff, Edinburgh, Glasgow, Leeds, Liverpool, Manchester, Sheffield, and Southampton. The result was a series of stunning data visualizations, which Dawes calls Digital City Portraits, but are really social media sunflowers. On the phone, Dawes can be both self-effacing and lyrical about his approach to data visualization.

Solar System Scope Algorithmically-generated artworks comprise ‘average’ of faces from movies Two artists have created a series of pieces that use facial recognition to detect all of the faces in movies and then creates an average of all the found faces. The result is series of ghostly images representing films including Black Swan, Avatar, The Matrix and Mission: Impossible. Shinseungback Kimyonghun -- a Seoul-based artistic collaboration made up of Shin Seung Back and Kim Yong Hun -- created a piece of software that could extract the "identity" of a film. It worked by detecting faces every 24 frames of a movie and then creating an average of all of the faces found in the frame. These faces were then layered over each other to create an average image for the entire movie. The artists told Wired.co.uk that the project -- called Portrait -- is a natural extension of their exploration of computer vision over the last few years. "We were already familiar with this [overlaying and averaging] technique.

Asteroid Watch Recent News February 5, 2015NASA's Dawn spacecraft, on approach to dwarf planet Ceres, has acquired its latest and closest-yet snapshot of this mysterious world. › Read more January 27, 2015NASA's Dawn spacecraft has returned the sharpest images ever seen of the dwarf planet Ceres. › Read more January 22, 2015There has been a significant increase in the amount of water "pouring" out of the Rosetta mission's comet. › Read more › More news Next Five Close Approaches Average distance between Earth and the moon is about 239,000 miles (385,000 kilometers). The Asteroid Watch Widget tracks asteroids and comets that will make relatively close approaches to Earth. The Widget displays the next five Earth approaches to within 4.6 million miles (7.5 million kilometers or 19.5 times the distance to the moon); an object larger than about 150 meters that can approach the Earth to within this distance is termed a potentially hazardous object.

Synesthesia Spotlight: Visualizing Music by Maria Popova What Vivaldi has to do with motion graphics, John Coltrane and skyscrapers of color. Synesthesia is a rare neurological condition that leads stimulation in one sensory pathway to trigger an experience in another. Basically, a short-circuiting in the brain that enables such strange phenomena like perceiving letters and numbers as inherently colored (color-graphemic synesthesia) or hearing sounds in response to visual motion. More than 60 types of synesthesia have been identified, with one of the most common being the cross-sensory experience of color and sound — “hearing” color or “seeing” music. These neurological eccentricities, however, can often be a source of tremendous artistic inspiration. Israeli artist and jazz musician Michal Levy (who also happens to be a dear friend) is an actual synesthetic: When she listens to music, she sees shapes and colors as different tones, pitches, frequencies, harmonies, and other elements of the melody unfold. Share on Tumblr

WFCAM Science Archive UKIDSS Galactic Plane Survey (GPS) Mosaic - DR7 The main window below displays a 6 billion pixel (1 arcsec pixels) mosaic of the GPS (centre: l=52, b=0 (109 > l > 0 ,360 > l > 355 and -2.5 < b < +2.5). Use the controls in the main window or the mouse (click&drag ) to move around the image and zoom in and out. Other versions: dr6 release dr4 release dr3 release dr2 release Details on the mosaic and its constructionWSA home Credits: The underlying blocks used to construct the mosaic were made using TERAPIX software, namely SWarp and STIFF (Emmanuel BERTIN). Visualizing Irrationally Beautiful Numbers / GARAKAMI From the pages of a textbook, mathematics often gets a bad rap for being either too stagnant or too perplexing. Scientists Cristian Ilies Vasile and Martin Krzywinski have found a way though to spark attention on some special numbers in math by creating colorful interpretations of them. Using a software designed for circular visualization called Circos, Vasile and Krzywinski have created a kaleidoscope of colors just from the digits of three mathematical constants: π (a ratio for a circle) , φ (the golden ratio), and e (Euler’s number). First Vasile connected each digit of π (3.141592…) to its successive digit for the first 10,000 digits. Vasile then visualizes this in a different way by starting at the color of the first number, drawing a color dot for the next number above it, and then repeating this for each successive number. Krzywinski then built on Vasile’s first progression plot by surrounding it with a bubble plot of the transition probabilities, shown below.

Immersion: a people-centric view of your email life Who's the most influential in a social graph? New software recognizes key influencers faster than ever (Phys.org)—At an airport, many people are essential for planes to take off. Gate staffs, refueling crews, flight attendants and pilots are in constant communication with each other as they perform required tasks. But it's the air traffic controller who talks with every plane, coordinating departures and runways. Communication must run through her in order for an airport to run smoothly and safely. In computational terms, the air traffic controller is the "betweenness centrality," the most connected person in the system. Determining the most influential person on a social media network (or, in computer terms, a graph) is more complex. Georgia Tech has developed a new algorithm that quickly determines betweenness centrality for streaming graphs. "Unlike existing algorithms, our system doesn't restart the computational process from scratch each time a new edge is inserted into a graph," said College of Computing Professor David Bader, the project's leader.