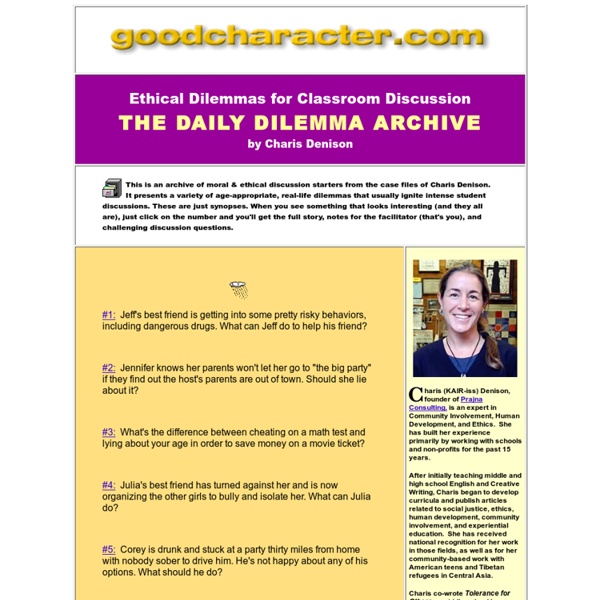 #1: Jeff's best friend is getting into some pretty risky behaviors, including dangerous drugs. What can Jeff do to help his friend? #2: Jennifer knows her parents won't let her go to "the big party" if they find out the host's parents are out of town. Should she lie about it? #3: What's the difference between cheating on a math test and lying about your age in order to save money on a movie ticket?

creative writing prompts . com ideas for writers Thought Questions: A question that makes you think is worth asking… Chestnut ESL/EFL Thought Questions: A question that makes you think is worth asking… ‘At the cusp of a new day, week, month, or year, most of us take a little time to reflect on our lives by looking back over the past and ahead into the future. We ponder the successes, failures and standout events that are slowly scripting our life’s story. This process of self reflection helps us maintain a conscious awareness of where we’ve been and where we intend to go. It is pertinent to the organization and preservation of our dreams, goals and desires.’ ‘Reflection is the key to progression..’ READ ARTICLE (TITLE SOURCE): Marc and Angel Hack Life Lesson Idea: Create flash cards with these Thought Questions and use them on a day with no lesson plan! Rate this: 2 Votes Share this: Like this: Related Film English -Apricot (Childhood Memories)In "ADVANCED" Dealing with Peer PressureIn "ADVANCED" LIFE LESSONSIn "BEGINNERS" ← Prev Next → Got something to say? Leave a Reply About Me Chestnut Esl- Poverty Resources

Teaching Writing Part 2: Offering Students an... This post was written by Evan Wolkenstein, a ClassDojo Thought Partner who tweets regularly at evanwolkenstein and blogs at magnetiCClassroom.com. This is part 2 of a 3 part series. Read part 1, here. Maybe you’re lucky, and you have a curriculum that includes teaching students how to organize thoughts, how to ensure that you’ve backed up your ideas — most likely, it’s all part of a unit on how to write an outline. And maybe you also have a golden Lamborghini and a pair of boots that can fly. Students often do not know how to organize their thoughts or write an outline. But what I get often reads more like Kafka’s stream-of-consciousness diary entries. Now, I am not an English Teacher. But I have a background in English Lit. But what about the ideas? One year, a student with some learning differences bombed an essay test she should have thrived on. Sure. The next time we had an essay exam, I gave her an outline in advance, and she thrived. But what about the other students? No! Someday.

How to Piss Off A Swede | Fresh Off The Plane I lived in Sweden for a year while studying abroad and it is one of my favorite places in the world. This is written with love and in jest :) —————- If you have ever pissed off a Swede, then you must be an absolutely insufferable human being. You can annoy, disturb, and bother a fair share of Swedes, but to actually bring one of those model-esque creatures to frothing, red-faced, pissed off anger would take a real rabble-rouser. This is a country known for its neutrality in war conflicts. Mistake them for Switzerland When I came back to America, after my year of studying abroad in Sweden, the amount of people that asked me how I liked the Swiss Alps was appalling. Smile at strangers in the street A Swedish friend once said to me, “If you are smiling at people out in the street, we think you are either drunk or crazy.” Don’t know how to dress for winter Det finns inget dåligt väder, bara dåliga kläder. proper swedish clothing…right?! Get them drunk Be overly conservative or religious Like this:

7 Good Resources for Avoiding, Preventing, and Detecting Plagiarism Thanks to an email from a kind reader I discovered that a couple of the resources about plagiarism that I reviewed in the past are no longer as good as they once were. Therefore, I have created this updated collection of resources for teaching students to how to avoid plagiarism along as well as resources for preventing and detecting plagiarism. Education is the best prevention:Purdue's OWL website is the number one place I refer students and parents to for questions not only about plagiarism, but also for questions about all parts of the writing process.A Magical Guide to Avoiding Plagiarism is an infographic guide created by Kate Hart. A Magical Guide to Avoiding Plagiarism uses a Harry Potter theme to succinctly explain to students when and why they need to properly cite the sources of their information. I've embedded the infographic below, but I encourage you to visit Kate Hart's blog post about it as she goes into more depth on the topic of plagiarism.

8 Strategies for Teaching Academic Language "Change your language and you change your thoughts." -- Karl Albrecht Understanding Academic Language Academic language is a meta-language that helps learners acquire the 50,000 words that they are expected to have internalized by the end of high school and includes everything from illustration and chart literacy to speaking, grammar and genres within fields. Think of academic language as the verbal clothing that we don in classrooms and other formal contexts to demonstrate cognition within cultures and to signal college readiness. There are two major kinds: instructional language ("What textual clues support your analysis?") Where to Start It would be a mistake to think that academic language is a garbage pail category involving any word, depending on the context. Teaching Academic Language 8 Specific Strategies 1. Reading and then thinking and talking about different genres is a robust sequence for learning academic language. 2. 3. 4. "The topic of my presentation is ______." 5. 6. 7. 8.

Six Alternatives to Book Reports | Education Rethink When I was a kid, I hated book reports. I hated filling out a form describing what I read. I wasn't a fan of artsy crafty alternatives, like cereal box projects or dioramas. This allows students to explore their favorite trends in books. What makes this fun is that kids get to rethink the role of the setting in the book. I love the notion of universes colliding and characters exploring their shared experiences. I've always thought it would be cool if Ira Glass would interview the entire Weasely family. The antagonist is arrested at the end of the book. Write a review. I have a few other ideas that I've never tested out. Create a TED Talk from the perspective of one of the characters. John Spencer John Spencer is a teacher, author, speaker, and incessant doodler.