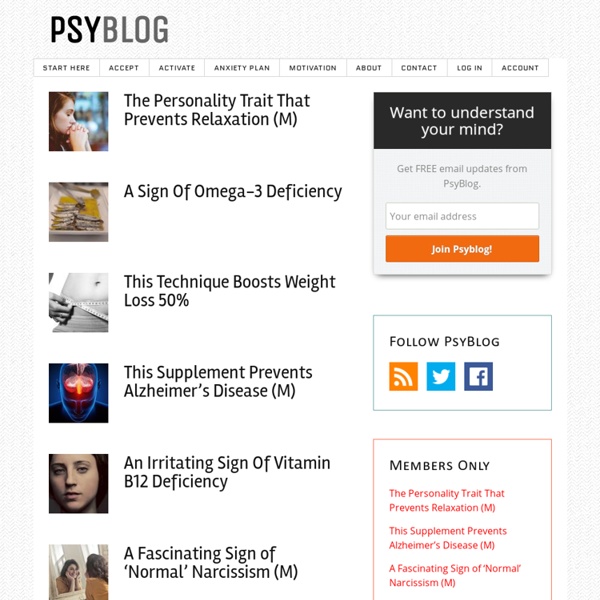 Nutella Mug Cake Bring Your Child's Favorite Characters to Life with These Disney-Themed Lunches Healthy Mickey-Shaped PB&J Muffins: A Breakfast the Whole Family with Love A Yummy Instant Pot Chicken and Rice Recipe Even the Pickiest Eaters Will Love The Top 10 Psychology Studies of 2010 The end of 2010 fast approaches, and I'm thrilled to have been asked by the editors of Psychology Today to write about the Top 10 psychology studies of the year. I've focused on studies that I personally feel stand out, not only as examples of great science, but even more importantly, as examples of how the science of psychology can improve our lives. Each study has a clear "take home" message, offering the reader an insight or a simple strategy they can use to reach their goals , strengthen their relationships, make better decisions, or become happier. If you extract the wisdom from these ten studies and apply them in your own life, 2011 just might be a very good year. 1) How to Break Bad Habits If you are trying to stop smoking , swearing, or chewing your nails, you have probably tried the strategy of distracting yourself - taking your mind off whatever it is you are trying not to do - to break the habit.

Eckhart Tolle's A New Earth Principles for Dummies When I first heard about Oprah's selection of Eckhart Tolle's book, A New Earth, I wasn't particularly enthused. Most of Oprah's book club selections are over my head, confusing and I usually stop reading mid-book. But when I heard about the free web classes online, this intrigued me to give A New Earth a try. Instead of buying the paperback book, I bought the audio book so I could listen in the car, at home, etc. I'll be honest.

Kanpai! Brewing Sake The bottles are slender and elegant and colored a frosty white or baby blue, alcohol levels usually hover in the mid-teens, and the price tags often exceed 30 or 40 bucks. For these reasons, sake has gained a reputation among many Westerners as the Eastern equivalent of fine wine — something rare and precious, to be consumed in tiny portions, and more often than not simply out of reach. But this favored table beverage of Japan is actually a simple grain-based brew, much like beer. And while it’s true that good sake, often called “rice wine,” is expensive, there’s an easy way around the price tag: make it at home. It takes just 4 ingredients, and anyone, using only the most basic of beer-making equipment, can transform a sack of pearly white rice into fragrant, perfumey sake in as little as 12 to 15 days.

logic and perception - topical index -The Skeptics Dictionary - Skepdic.com Last updated 20-Nov-2015 Recommended Reading Critical Thinking Mini-Lessons Perception puzzles, Visual Perception, Optical illusions and Paradoxes This page illustrates that our visual perception cannot always be trusted. The components of an object can distort the perception of the complete object. Our mind is the final arbiter of truth. Most optical illusions are the result of 1) incongruent design elements at opposite ends of parallel lines, 2) influence of background patterns on the overall design, 3) adjustment of our perception at the boundaries of areas of high contrast, 4) afterimages resulting from eye movements or from kinetic displays, or 5) inability to interpret the spatial structure of an object from the context provided by the picture. The Parthenon Optical illusions have been studied for millenia.

Dating Tips and Dating Advice by David Wygant The phone rings and you hear the dreaded words “We need to talk.” Then you get the knock on the door, your significant other comes in, and everything spirals down from there. The next thing you know, you’re hearing “We just aren’t connecting the way we need to be” or something similar to that. Whatever the specific phrase is, someone has just broken up with you. Let’s face it, it’s never good to hear any form of the words “We need to breakup.”

The Starter's Guide to Brewing Beer Serious about making large batches of beer? Splurge for a propane-powered rig with a three-tiered brew stand. This setup, by Indiana-based Blichmann Engineering, costs about $2000 and features a trio of 20- to 30-gallon pots and gas burners that put out 216,000 Btu per hour. Lucid Dreaming/Using Dream stabilization[edit] Once you are able to dream lucidly, you may find that it is difficult to stay in the dream; for example, you may wake instantly or the dream may start “fading” which is characterized by loss or degradation of any of the senses, especially vision. Alternatively, a new lucid dreamer could easily forget that they are in a dream, as a result of the shock of the sensation. Don't worry if you wake immediately after becoming lucid.

Color Survey Results « xkcd Who in the rainbow can draw the line where the violet tint ends and the orange tint begins? Distinctly we see the difference of the colors, but where exactly does the one first blendingly enter into the other? So with sanity and insanity. —Herman Melville, Billy Budd Self Improvement Articles fMotivation aProductivity hHealth cSelf Improvement Skip to content R'ha - A Short Sci-Fi Film That Could Make Hollywood Jealous [VBideo] Steven On January 11, 2013 What if, instead of man versus robots it was an alien life form that was attacked by the robotic life that they had created? This is the premise behind an awesome short science fiction film called R’ha that was directed and animated by 22-year-old Kaleb Lechowski and I gotta tell you Kaleb could teach Hollywood a thing or two. R’ha is definitely one of those short films that should have the big budget boys drooling and bidding like crazy to get their hands on this film and the talented Kaleb. UPDATE: As we hoped for it seems that R’ha has been picked up by Hollywood. via Geek Tyrant