How to Talk to Little Girls 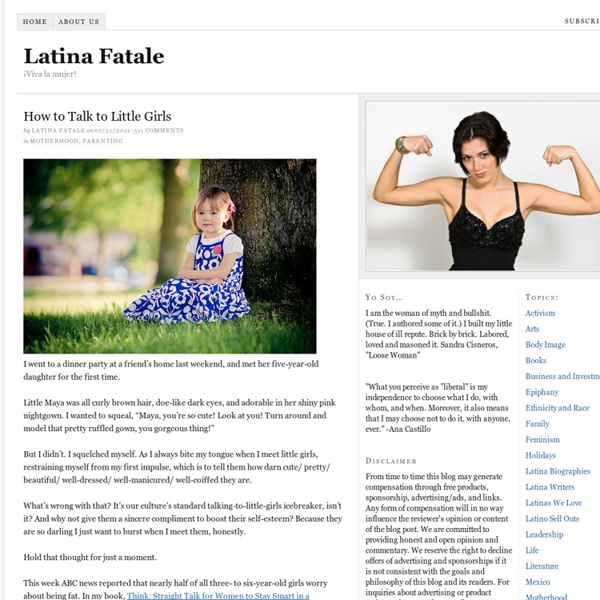 I went to a dinner party at a friend’s home last weekend, and met her five-year-old daughter for the first time. Little Maya was all curly brown hair, doe-like dark eyes, and adorable in her shiny pink nightgown. I wanted to squeal, “Maya, you’re so cute! Look at you! Turn around and model that pretty ruffled gown, you gorgeous thing!” But I didn’t. What’s wrong with that? Hold that thought for just a moment. This week ABC news reported that nearly half of all three- to six-year-old girls worry about being fat. Teaching girls that their appearance is the first thing you notice tells them that looks are more important than anything. That’s why I force myself to talk to little girls as follows. “Maya,” I said, crouching down at her level, looking into her eyes, “very nice to meet you.” “Nice to meet you too,” she said, in that trained, polite, talking-to-adults good girl voice. “Hey, what are you reading?” “I LOVE books,” I said. Most kids do. “YES,” she said. “Wow, amazing!” “I’ll go get it!

Is It Time for Some Facts About Those Migrants?  Perhaps you'll think I'm naïve, but I still believe that when you have a debate, it's a good idea to have some facts readily to hand. So here are some facts that you might find useful next time you're thinking about that "swarm" (David Cameron's word, not mine) of migrants crossing the Mediterranean from north Africa. Why not keep them handy (the facts, not the migrants) on your smartphone, or print them out and shove them in a pocket. Q.1: Why do they all want to come to the UK? A: They don't. How to Write a Creative Brief - 9 Steps to Writing a Good Creative Brief The creative brief is the foundation of any advertising or marketing campaign. It's the treasure map that creatives follow, and it tells them where to start digging for those golden ideas. Or at least, it should, if it's any good.

Psychology Today - StumbleUpon Step into any bar or party and it won't take you long to spot her. She's the woman with the ringing laugh, the daring clothes, the magnetic appeal that has drawn a circle of admirers around her. If the room were a solar system, she would be the sun—and at the outer reaches, you notice, are several other women seated quietly in her shadow. Why does this woman command all the attention? Psychologists, image experts, and dating advisers propose a host of explanations: It's her extraverted personality, her come-hither look, her approachable persona. But an evolutionary biologist observing the scene would offer a more surprising interpretation, one that may help explain barroom dynamics and much more: It's her "real" time of the month.

Non-Binary Gender Identity Explained First thing's first: consider gender a language that you have to learn to be fluent in. Like with any language, the older you get, the harder it is to understand, which is why some adults find it too daunting to learn. The truth is, it's really not so complicated, and we should really all be fluent in gender, because it helps all of us understand our own identities better. Contemporary Architecture Course Our course will analyze major contemporary architectural ideas, ideologies, and projects in the context of both globalization and specific local contexts. We will trace the development of architecture since the early 90s by discussing the work of some of the most influential architects of our time. The critical reflection on contemporary topics will allow students to better understand the buildings and cities which we live in. When talking about the architectural protagonists of today, we will focus on their most recent work.

Ucas warns some students may be disadvantaged by A-level changes Ucas, the organisation that handles British university admissions, is warning that some students applying for places may be disadvantaged by the uneven and confusing wave of A-level exam changes taking place later this year. In a survey of 500 secondary schools, Ucas found many unsure how to respond to the A-level changes in England, which strip out AS-level exams as part of A-level grades and introduce a series of new two-year linear exams from September this year until 2017. Ucas warned that the mixture of new and old-style exams, some including modular AS-levels and some not, will not be over until 2020. “Universities and colleges should review their admissions practices in light of qualification reform happening around the UK to ensure that students are not disadvantaged as a result of curriculum choices made by their schools or colleges,” Ucas recommended to universities as part of its analysis. Ucas said universities would need to be clear and transparent in their entry requirements.

Choose Not to Confuse Bryan Eisenberg | May 17, 2013 | 0 Comments in Share 3 Every company has to make choices when it comes to how it markets and sells, and, in some cases, who it is and what it sells. In an email exchange, Tom Grimes, the owner of a Culligan dealership in Amarillo, TX and a brilliant friend, shared with me what he's thinking about in terms of business choices.