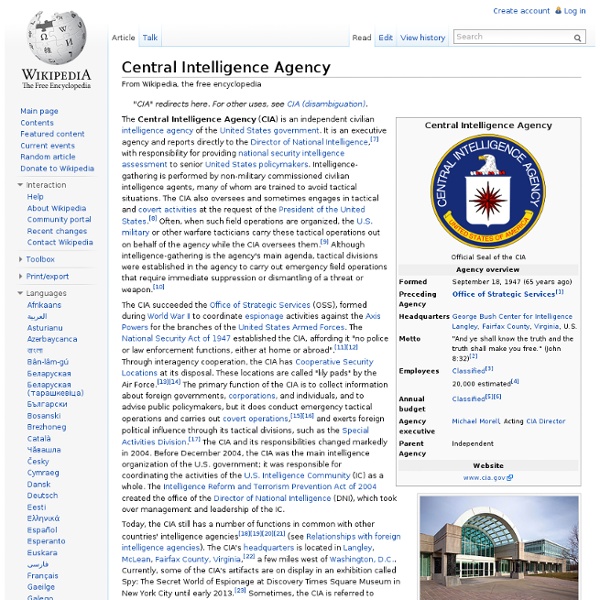 The entrance of the CIA New Headquarters Building (NHB) of the George Bush Center for Intelligence. The Central Intelligence Agency (CIA) is one of the principal intelligence-gathering agencies of the United States federal government. The CIA's headquarters is in Langley, Virginia, a few miles west of Washington, D.C.[7] Its employees operate from U.S. embassies and many other locations around the world.[8][9] The only independent U.S. intelligence agency, it reports to the Director of National Intelligence.[10] Several CIA activities have attracted criticism. They include nonconsentual human experiments, extraordinary rendition, enhanced interrogation techniques, targeted killings, assassinations and the funding and training of militants who would go on to kill civilians and non-combatants.[19][20][21] Purpose According to its fiscal 2013 budget, the CIA has five priorities:[4] Organizational structure Executive Office Executive staff General publications General Counsel and Inspector General

George H. W. Bush This article is about the 41st U.S. president. For his son, the 43rd U.S. president, see George W. Bush. Bush was born in Milton, Massachusetts, to Senator Prescott Bush and Dorothy Walker Bush. Following the attack on Pearl Harbor in 1941, Bush postponed college, enlisted in the U.S. Navy on his 18th birthday, and became the youngest aviator in the U.S. Alleged branch of Illuminati by Alexandra Robbins History The Owl of Minerva perched on a book was an emblem used by the Bavarian Illuminati in their "Minerval" degree. The Illuminati movement was founded on May 1, 1776 in Ingolstadt, Upper Bavaria as the Order of the Illuminati, and had an initial membership of five.[2] The founder was the Jesuit-taught Adam Weishaupt (d. 1830),[3] who was the first lay professor of canon law at the University of Ingolstadt.[1] The Order was made up of freethinkers as an offshoot of the Enlightenment and seems to have been modelled on the Freemasons.[4] Illuminati members took a vow of secrecy and pledged obedience to their superiors. Members were divided into three main classes, each with several degrees, and many Illuminati chapters drew membership from existing Masonic lodges. Fundamental changes occurred in the wake of the acceptance of Adolph Freiherr Knigge into the order. Knigge was a young author and Freemason who was steeped in the Western mystery traditions from an early age.

The Failure Of The FBI’s Virtual Case File Project Between 2001 and 2005, the FBI’s Virtual Case File project failed. The Virtual Case File project was part of a larger initiative called Trilogy. Costs overran by 89% or just over $200M. DOJ United States Department of Justice The United States Department of Justice (DOJ), also known as the Justice Department, is the U.S. federal executive department responsible for the enforcement of the law and administration of justice, equivalent to the justice or interior ministries of other countries. The Department is led by the Attorney General, who is nominated by the President and confirmed by the Senate and is a member of the Cabinet. The current Attorney General is Eric Holder. History[edit] The Attorney General was initially a one-person, part-time job. It was established by the Judiciary Act of 1789, but this grew with the bureaucracy.

Prescott Bush Prescott Sheldon Bush (May 15, 1895 – October 8, 1972) was an American banker and politician. He was a Wall Street executive banker and a United States Senator, representing Connecticut from 1952 until January 1963. He was the father of George H. W. .Antony C. Sutton Antony Cyril Sutton (February 14, 1925 – June 17, 2002) was a British and American economist, historian, and writer. Biography[edit] Sutton studied at the universities of London, Göttingen, and California, and received his D.Sc. from the University of Southampton.

The FBI's Upgrade That Wasn't As far as Zalmai Azmi was concerned, the FBI's technological revolution was only weeks away. It was late 2003, and a contractor, Science Applications International Corp. (SAIC), had spent months writing 730,000 lines of computer code for the Virtual Case File (VCF), a networked system for tracking criminal cases that was designed to replace the bureau's antiquated paper files and, finally, shove J. Edgar Hoover's FBI into the 21st century. Information Awareness Office The Information Awareness Office (IAO) was established by the Defense Advanced Research Projects Agency (DARPA) in January 2002 to bring together several DARPA projects focused on applying surveillance and information technology to track and monitor terrorists and other asymmetric threats to U.S. national security, by achieving "Total Information Awareness" (TIA).[4][5][6] This was achieved by creating enormous computer databases to gather and store the personal information of everyone in the United States, including personal e-mails, social networks, credit card records, phone calls, medical records, and numerous other sources, without any requirement for a search warrant.[7] This information was then analyzed to look for suspicious activities, connections between individuals, and "threats".[8] Additionally, the program included funding for biometric surveillance technologies that could identify and track individuals using surveillance cameras, and other methods.[8] History[edit]

Nineteen Eighty-Four History and title[edit] A 1947 draft manuscript of the first page of Nineteen Eighty-Four, showing the editorial development. The Last Man in Europe was an early title for the novel but in a letter dated 22 October 1948 to his publisher Fredric Warburg, eight months before publication, Orwell wrote about hesitating between The Last Man in Europe and Nineteen Eighty-Four.[14] Warburg suggested changing the main title to a more commercial one.[15] Copyright status[edit] The novel will be in the public domain in the European Union and Russia in 2021 and in the United States in 2044.[21] It is already in the public domain in Canada;[22] South Africa,[23] Argentina[24] Australia,[25] and Oman.[26]

Alexandra Robbins Alexandra Robbins (born in 1976) is a journalist, lecturer, and author. Her books focus on young adults, education, and modern college life and its aspects that are often overlooked or ignored by college administrators.[citation needed] Three of her five books have been New York Times Best Sellers. Biography[edit] HowStuffWorks "Structure of the FBI " The FBI is part of the U.S. Department of Justice, which is headed by the U.S. Attorney General.