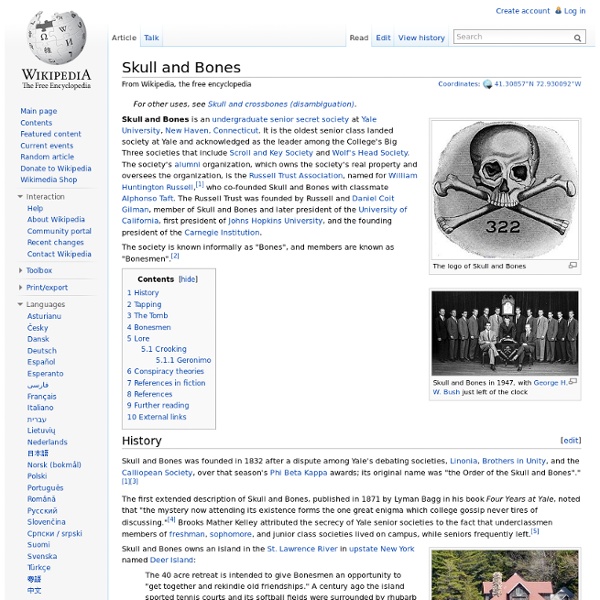 History[edit] Skull and Bones was founded in 1832 after a dispute between Yale debating societies Linonia, Brothers in Unity, and the Calliopean Society over that season's Phi Beta Kappa awards. It was co-founded by William Huntington Russell and Alphonso Taft as "the Order of the Skull and Bones".[2][3] The society's assets are managed by the society's alumni organization, the Russell Trust Association, incorporated in 1856 and named after the Bones co-founder.[2] The association was founded by Russell and Daniel Coit Gilman, a Skull and Bones member, and later president of the University of California, first president of Johns Hopkins University, and the founding president of the Carnegie Institution. The first extended description of Skull and Bones, published in 1871 by Lyman Bagg in his book Four Years at Yale, noted that "the mystery now attending its existence forms the one great enigma which college gossip never tires of discussing. The Tomb[edit] Coordinates: Bonesmen[edit]

Illuminati History The Owl of Minerva perched on a book was an emblem used by the Bavarian Illuminati in their "Minerval" degree. The Illuminati movement was founded on May 1, 1776 in Ingolstadt, Upper Bavaria as the Order of the Illuminati, and had an initial membership of five.[2] The founder was the Jesuit-taught Adam Weishaupt (d. 1830),[3] who was the first lay professor of canon law at the University of Ingolstadt.[1] The Order was made up of freethinkers as an offshoot of the Enlightenment and seems to have been modelled on the Freemasons.[4] Illuminati members took a vow of secrecy and pledged obedience to their superiors. Members were divided into three main classes, each with several degrees, and many Illuminati chapters drew membership from existing Masonic lodges. Fundamental changes occurred in the wake of the acceptance of Adolph Freiherr Knigge into the order. Knigge was a young author and Freemason who was steeped in the Western mystery traditions from an early age.

Secret society "Secret Society Buildings at Yale College", by Alice Donlevy[1] ca. 1880. Pictured are: Psi Upsilon (Beta Chapter), 120 High Street. Left center: Skull & Bones (Russell Trust Association), 64 High Street. Bohemian Grove Coordinates: Bohemian Grove is a 2,700-acre (1,100 ha) campground located at 20601 Bohemian Avenue, in Monte Rio, California, belonging to a private San Francisco-based men's art club known as the Bohemian Club. In mid-July each year, Bohemian Grove hosts a two-week, three-weekend encampment of some of the most powerful men in the world.[1][2] Introduction[edit] The Bohemian Club's all-male membership and guest list includes artists, particularly musicians, as well as many prominent business leaders, government officials (including U.S. presidents), senior media executives, and people of power.[3][4] Members may invite guests to the Grove although those guests are subject to a screening procedure. A guest's first glimpse of the Grove typically is during the "Spring Jinks" in June, preceding the main July encampment.

Alexandra Robbins Alexandra Robbins (born in 1976) is a journalist, lecturer, and author. Her books focus on young adults, education, and modern college life and its aspects that are often overlooked or ignored by college administrators.[citation needed] Three of her five books have been New York Times Best Sellers. Biography[edit] Top 10 Secret Societies No matter what their supposed purpose, there’s something inherently sinister about a secret society. Though most are formed with relatively realistic political and religious goals in mind, their focus on mystery and secrecy has made them the target of countless criticisms and conspiracy theories involving everything from aliens and the occult to world domination. Of course, the reality is usually much more innocuous, but that doesn’t mean that the groups don’t have some fascinatingly weird practices, or that they haven’t had an impact on world events.

United Nations The United Nations (UN) is an intergovernmental organization established on 24 October 1945 to promote international co-operation. A replacement for the ineffective League of Nations, the organization was created following the Second World War to prevent another such conflict. At its founding, the UN had 51 member states; there are now 193. The UN Headquarters is situated in Manhattan, New York City and enjoys extraterritoriality. Alleged Mater of CIA by Alexandra Robbins The entrance of the CIA New Headquarters Building (NHB) of the George Bush Center for Intelligence. The Central Intelligence Agency (CIA) is one of the principal intelligence-gathering agencies of the United States federal government. The CIA's headquarters is in Langley, Virginia, a few miles west of Washington, D.C.[7] Its employees operate from U.S. embassies and many other locations around the world.[8][9] The only independent U.S. intelligence agency, it reports to the Director of National Intelligence.[10] Several CIA activities have attracted criticism. They include nonconsentual human experiments, extraordinary rendition, enhanced interrogation techniques, targeted killings, assassinations and the funding and training of militants who would go on to kill civilians and non-combatants.[19][20][21]

.Antony C. Sutton Antony Cyril Sutton (February 14, 1925 – June 17, 2002) was a British and American economist, historian, and writer. Biography[edit] Sutton studied at the universities of London, Göttingen, and California, and received his D.Sc. from the University of Southampton.

Cancer Cancer The causes of cancer are diverse, complex, and only partially understood. Many things are known to increase the risk of cancer, including tobacco use, dietary factors, certain infections, exposure to radiation, lack of physical activity, obesity, and environmental pollutants.[2] These factors can directly damage genes or combine with existing genetic faults within cells to cause cancerous mutations.[3] Approximately 5–10% of cancers can be traced directly to inherited genetic defects.[4] Many cancers could be prevented by not smoking, eating more vegetables, fruits and whole grains, eating less meat and refined carbohydrates, maintaining a healthy weight, exercising, minimizing sunlight exposure, and being vaccinated against some infectious diseases.[2][5] Cancer can be detected in a number of ways, including the presence of certain signs and symptoms, screening tests, or medical imaging.