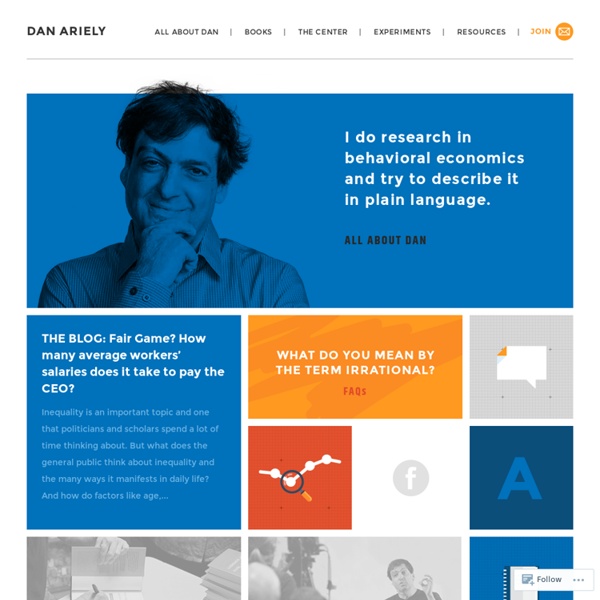 Mar 15 Here’s my Q&A column from the WSJ this week — and if you have any questions for me, you can tweet them to @danariely with the hashtag #askariely, post a comment on my Ask Ariely Facebook page, or email them to AskAriely@wsj.com. Dear Dan, Why are there so many religions, all of which suggest that God is on their side and holds the same values that they do? —Moshe One answer comes from a 2009 study by Nick Epley and some of his colleagues from the University of Chicago, which asked religious Americans to state their positions on abortion, the death punishment and the war in Iraq.

Distributed economy Distributed economies (DE) is a term that was coined by Allan Johansson et al. in 2005.[1] Definition[edit] There is no official definition for DE, but it could be described as a regional approach to promote innovation by small and medium sized enterprises, as well as sustainable development. The concept is illustrated in the figure below, that shows centralised, decentralised and distributed economies respectively. Different types of economies Features[edit] Build a $21 Portable Vocal Booth One of the hallmarks of amateur podcasts is extraneous sound in the voiceover. If you simply stick a mic on your desktop or kitchen table, it will pick up all kinds of audio garbage, from howling computer fans to humming refrigerators. Another ugly sound is reverberation caused by your voice bouncing off hard surfaces like walls or tabletops, which imparts a hollow, blurry effect to the sound, reducing the punch and intimacy. Professional voiceover artists, of course, record in soundproofed studios, but that's not always an option when you're traveling. A year ago, I mentioned voiceover pro Harlan Hogan's ingenious portable vocal booth, a collapsible box that surrounds the mic with acoustic foam, blocking background noise and reverberation.

The Problem of Economic Calculation - Ludwig von Mises Since recent events helped socialist parties to obtain power in Russia, Hungary, Germany and Austria, and have thus made the execution of a socialist nationalization program a topical issue, Marxist writers have themselves begun to deal more closely with the problems of the regulation of the socialist commonwealth. But even now they still cautiously avoid the crucial question, leaving it to be tackled by the despised "Utopians." They themselves prefer to confine their attention to what is to be done in the immediate future; they are forever drawing up programs of the path to Socialism and not of Socialism itself. The only possible conclusion from all these writings is that they are not even conscious of the larger problem of economic calculation in a socialist society. To Otto Bauer the nationalization of the banks appears the final and decisive step in the carrying through of the socialist nationalization program.

Placeholder Text Replacements When designing anything with content (websites, brochures, etc.), if you don’t have the real content, using Lorem Ipsum is the most common way to fill those spaces. However, for anyone who designs regularly and needs such filler text, it is pretty boring to use Lorem Ipsum again and again. If you want to try an alternative to Lorem Ipsum, there are several web-based generators which are easy-to-use, customizable and, usually, fun. Check them out: The Shape of Things to Come Sphero is a new toy that meshes the personality and maneuverability of a remote-controlled car with the simple form factor of an ordinary ball. You control this colorful, robotic sphere using apps that run on your smartphone. Sphero holds promise, but it's going to take some imagination and some app development to really get the most out of this innovation. It's not quite the future of gaming. For now, it's just the future of cat toys. Sphero's been hotly anticipated since its debut before last holiday season.

Unfluence The Unfluence site constructs maps of the funding relations between groups of candidates and donors. The data comes from candidates' required disclosures, collected and made available to the public by the National Institute on Money in State Politics (NIMSP). The basic idea is to help people understand the context of political giving, and the relative positions of various candidates in terms of who is paying for their campaign. A query is generated from the initial search settings and sent to NIMSP's API which looks in their databases and returns a list of matching candidates as an xml file.

Professor Curt Bonk's e-Learning World This is the homepage of Curtis J. Bonk, Ph.D. Curt is Professor at Indiana University teaching psychology and technology courses. Curt is affiliated with the cognitive sciences program and is adjunct in the School of Informatics at IU. He founded SurveyShare, Inc. in 2003 which he sold in 2010. Visualising traffic on img.ly During Nodecamp 2011, the members of 9elements - a small company dedicated to web applications - were eager to present a live tracker built with node.js. Inspired by Paul Butler's Facebook Map, the team decided to go with data from img.ly, a popular social photo sharing service that happens to be the image service of Twitterrific. The visualization they ended up creating shows the live activity of visitors on img.ly as a series of dynamic arcs across the globe. Each arc starts with the location of the visitor and ends with the location of the image the visitor is looking at. As the authors explain, they were particularly interested in disclosing hidden connections within img.ly: "There are already many apps plotting visitors on a map, so obviously this was not very interesting.

Blackboard Test Generators Go to Question Types: Multiple Choice, Multiple Answer, True-False, Essay, and Fill-in-the-Blank. This test generator is unique in that it allows you to enter questions and generate for a Test or for a Pool. To see a sample of the formatting requirements, choose the type of question from the Create Sample Question drop down box on the left. Click OK. Global Pulse Twitter is a remarkable tool to analyze information diffusion, and investigate social patterns and trends. In June 2011, Abdur Chowdhury and his team at Twitter posted a few visualization experiments covering the volume and worldwide scale of Twitter messages during the devastating earthquake in Japan on March 11. As they stated on the original post: "During major events, people use Twitter to share news and thoughts with friends, family and followers around the world. Messages originating in one place are quickly spread across the globe through Retweets, @replies and Direct Messages.

Why the future of work is play - TNW Industry Is this what you look like right now? You’re not alone. But it doesn’t have to be like that. On Friday at the annual PSFK conference in New York City, Founding Partner and CEO of Undercurrent, a digital strategy firm and author of Game Frame Aaron Dignan took the stage to discuss why the future of work is play. For years, society has polarized “play” and “work,” associating the former with laziness and the latter with grave importance.