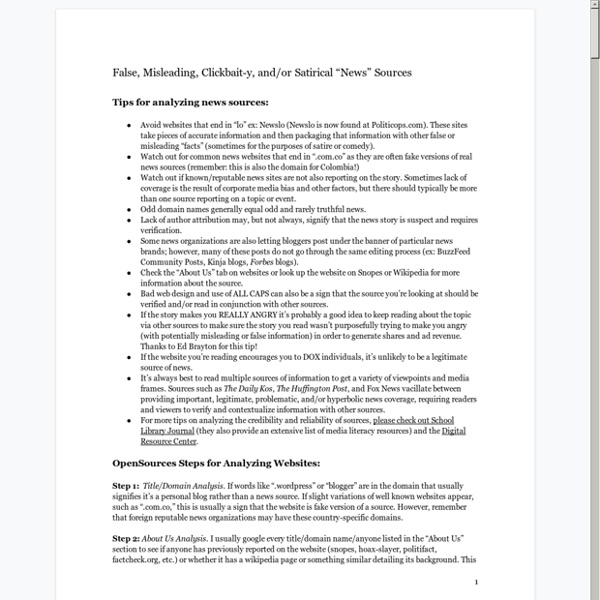 Study: Religious fundamentalists and dogmatic individuals are more likely to believe fake news New research provides evidence that delusion-prone individuals, dogmatic individuals, and religious fundamentalists are more likely to believe fake news. The study, which appears in the Journal of Applied Research in Memory and Cognition, suggests that the inability to detect false information is related to a failure to be actively open-minded. The rise of online social media has led to growing concerns about the spread of unsubstantiated rumors, misleading political propaganda, and blatantly false articles designed to create viral web traffic. Even the U.S. Army has become involved in efforts to understand and combat disinformation in cyberspace. “Our interest in fake news is grounded in a general interest in understanding the common experience of believing things that are not true,” explained study author Michael V.

The Definitive List of 176 Fake News Sites on Facebook Fake news is unavoidable. While the idea of “fake news” was born out of the very real instances of fake news stories helping sway the election in favor of now-President Donald Trump, it has since been co-opted by Trump’s administration to be used as a weapon to sow doubt in legitimate media stories that they find unappealing. But real fake news—not the kind Trump likes to point out on Twitter virtually every day—is pervasive. And if you care about reading truthful stories, you need to be on high alert. Facebook, a primary driver of traffic to publications, came under fire late last year for allowing the promotion of fake news sites that deal in conspiracy theories rather than facts. Some Facebook employees even reportedly revolted and took matters into their own hands before the company took steps to reduce fake news.

Trustworthy advice for a post-truth world - University of Alberta How do you tell fact from fiction in an online world where fake news often seems like the real thing? When the Oxford English Dictionary picked “post-truth” as word of the year for 2016, it seemed to signal a shift in the way we perceive the world—the triumph of emotional response over rational thought. But our susceptibility to “fake news” is not a new problem. It goes back at least as far as the 1890s, when the term “yellow journalism” emerged in the New York newspaper wars to denote a brand of sensational reporting more interested in circulation than accuracy. The tricks propagandists use to beat science Back in the 1950s, health professionals became concerned that smoking was causing cancer. Then, in 1952, the popular magazine Reader’s Digest published “Cancer by the Carton,” an article about the increasing body of evidence that proved it. The article caused widespread shock and media coverage.

Stony Brook Center for News Literacy The full News Literacy course, developed at Stony Brook University, organizes the material into 8 concepts that are spread amongst our 14 week course that take students from the first information revolution of Johannes Gutenberg's printing press to the Digital Age of Mark Zuckerberg's Facebook. Each lesson stands alone or can easily be integrated into your program. Below, find a summary of each of those lessons, and a link to the most updated version of the teaching materials for each from our professors at Stony Brook University. Each of the following Course Packs include PowerPoint presentations, associated media, lecture notes, and recitation materials.

10 Ways to Spot a Fake News Article - EasyBib Blog For many of us, 2016 is going down as a year to forget. Election upsets, Zika, the Syrian crisis, and unfortunately tons of fake news about all of the above and everything in between. Denzel Washington was recently quoted as saying, “If you don’t read the newspaper, you’re uninformed. How US billionaires are fuelling the hard-right cause in Britain Dark money is among the greatest current threats to democracy. It means money spent below the public radar, that seeks to change political outcomes. It enables very rich people and corporations to influence politics without showing their hands.

"fake news" not new 2 clicks Donald Trump may well be remembered as the president who cried “fake news.” It started after the inauguration, when he used it to discredit stories about the size of the crowd at his inauguration. He hasn’t let up since, labeling any criticism and negative coverage as “fake.” Just in time for awards season, he rolled out his “Fake News Awards” and, in true Trumpian fashion, it appears he is convinced that he invented the term.