Twitter Is Having A Field Day With The New Man Bun Ken Doll. ‘Devil’s Advocate Boy’ Statue Erected On Wall Street Next To ‘Fearless Girl’ Bravely staring down the financial district’s ‘Charging Bull,’ many women have found the popular ‘Fearless Girl’ statue’ on Wall Street a source of inspiration in the ongoing fight for gender equality. 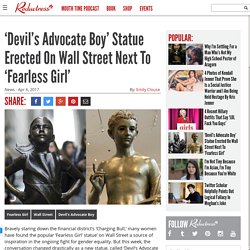 But this week, the conversation changed drastically as a new statue, called ‘Devil’s Advocate Boy,’ unexpectedly sprang up next to her. The bronze statue, which sort of aggressively came out of nowhere, features a young boy with his hands on his hips, shoulders slightly shrugged and head cocked to the side, as if saying, “Now, don’t get me wrong—“, “Not that I personally think that, but…“ or perhaps “I’m just saying!” It appears his sole purpose is to explain the opposing side of arguments to ‘Fearless Girl,’ even though no one asked him. ‘Devil’s Advocate Boy’ is approximately 50 inches tall, exactly the same height as ‘Fearless Girl.’

However, he weighs about five pounds more, most likely an artist’s nod to the heavy burden of being right all the time. A New Contraceptive. Edible Anus Chocolates - Chocolates Shaped Like Butt Holes. June 7, 2013 at 2:08PM By Natasha Burton | One of the coolest things I did in college was make chocolate vaginas. Seriously. I then peddled said vaginas to unsuspecting frat guys in the middle of campus with my fab feminist compatriots as we raised money for our yearly production of The Vagina Monologues. (The look on those dudes' faces when we asked them if they wanted to buy a vag to eat during their next class? Priceless.) But while I can totes appreciate a sex organ confectionary—especially in the name of raising moolah to combat domestic violence—I have to say that I'm a tad disturbed by the idea of actually eating one. (Chocolate boobs, however, are a bit less creepy. Though, chocolate vaginas and breasts pale in comparison to a line of, yes, chocolate anuses that have been getting a lot of attention today.

Founded in Great Britain, Edible Anus makes—what else? We don't think so. Fuck the High Road: The Upside of Sinking to Their Level. Share AP Photo. 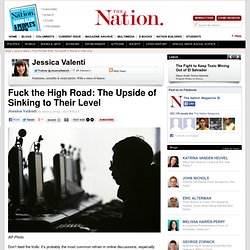 Don’t feed the trolls: it’s probably the most common refrain in online discussions, especially when dealing with misogynists in feminists conversations. The idea is that the best way to deal with sexists is to starve of them of the attention they’re so clearly desperate for. Besides, we think, why sink to their level? But the high road is overrated. When I started Feministing in 2004, the hate mail started to pour in right away. It was also a way to demand accountability in a space that’s often dominated by hate speech made anonymously. For Lindy West, staff writer at Jezebel, engaging with hateful detractors is not just important as a way to bring attention to misogyny—“A lot of those attitudes are poisoning our culture, and it’s too easy to write them off as some fringe opinion,” she says—but also because it can be cathartic.

In celebration of the release of The Hunger Games in theaters, I figured there was no better way to welcome Katniss Everdeen to the pantheon of pop culture heroines, than by imagining what it would be like to be a fly on the wall during Girls Night. 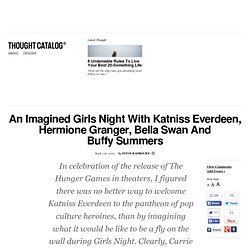 Clearly, Carrie Bradshaw was not invited. Buffy: Hi girls! Thanks for joining me for this Heroines of Pop Culture ladies night. Sookie called to say she’s sad she couldn’t make it. But no worries! Bella: I only drink red. Hermione: I’ll have some! Katniss: You’re willing to feed me something?!?!? Buffy: Well, we’re fresh out of those… Bella: Got any blood? Buffy: You know who you’re asking, right? Katniss: Moving on… So, how was everyone’s week? Hermione: Oh, same old. Buffy: I was saving the world. Katniss: I was also saving the world! Bella: I jumped off a cliff to get the attention of my ex-boyfriend.