Coke a good snack? Health experts who work with Coke say so. NEW YORK (AP) — Coca-Cola is working with fitness and nutrition experts who suggest its soda as a treat at a time when the world's biggest beverage maker is being blamed for helping to fuel obesity rates. 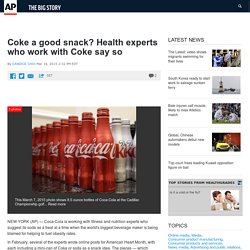 In February, several of the experts wrote online posts for American Heart Month, with each including a mini-can of Coke or soda as a snack idea. The pieces — which appeared on nutrition blogs and other sites including those of major newspapers — offer a window into the many ways food companies work behind the scenes to cast their products in a positive light, often with the help of third parties who are seen as trusted authorities. Ben Sheidler, a Coca-Cola spokesman, compared the February posts to product placement deals a company might have with TV shows. Coca-Cola Caught Paying 'Health Leaders' to Say Soda is 'Healthy Snack'

Would you like a healthy dose of high-fructose corn syrup with that organic salad? 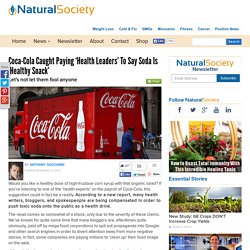 If you’re listening to one of the ‘health experts’ on the payroll of Coca-Cola, this suggestion could in fact be a reality. According to a new report, many health writers, bloggers, and spokespeople are being compensated in order to push toxic soda onto the public as a health drink. The news comes as somewhat of a shock, only due to the severity of these claims. Global Research - Centre for Research on Globalization. In an attempt to curb the mass rush for food change and reform, psychiatry has green lighted a public relations push to spread awareness about their new buzzword “orthorexia nervosa,” defined as “a pathological obsession for biologically pure and healthy nutrition.” 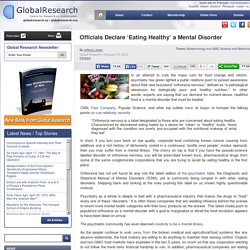 In other words, experts are saying that our demand for nutrient-dense, healthful food is a mental disorder that must be treated. CNN, Fast Company, Popular Science, and other top outlets have all began to trumpet the talking points on cue relatively recently: “Orthorexia nervosa is a label designated to those who are concerned about eating healthy. Characterized by disordered eating fueled by a desire for “clean” or “healthy” foods, those diagnosed with the condition are overly pre-occupied with the nutritional makeup of what they eat”.

Officials Declare 'Eating Healthy' a Mental Disorder. 90% Of Big Pharma Spent More On Marketing Than Research. Surely Big Pharma corporations are spending their cash on research ‘for the cure’ and finding ways to implement life-saving ingredients into their next formula, right? 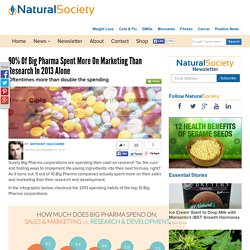 As it turns out, 9 out of 10 Big Pharma companies actually spent more on their sales and marketing than their research and development. Monsanto CEO Admits they Need more Propaganda to Defeat GMO Activists. In Nazi Germany the use of propaganda was taken to newer and more perverse levels than the world has ever seen, but 2014 just might have a spin-machine that can trump it. 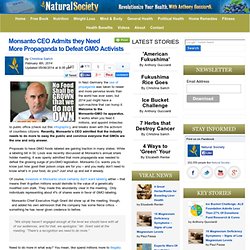 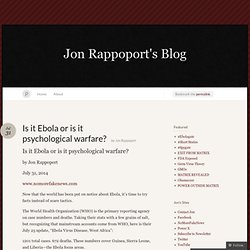 By Jon Rappoport July 31, 2014 www.nomorefakenews.com Now that the world has been put on notice about Ebola, it’s time to try facts instead of scare tactics. The World Health Organization (WHO) is the primary reporting agency on case numbers and deaths. 1201 total cases. 672 deaths. Monsanto Double Standards and the Crumbling “Scientific Myths” of the GMO Biotech Sector. The GMO biotech sector is involved in a multi-pronged campaign to influence governments and the public about the benefits of its products. 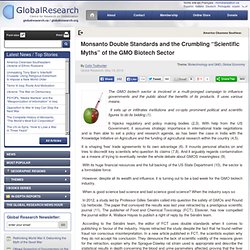 It uses various means. Fluoridation doublespeak from the American Dental Association. Best Public Relations That Money Can Buy: A Guide to Food Industry Front Group front groups by Center for Food Safety. Media lies about supplements. (NaturalNews) How does the Media lie? 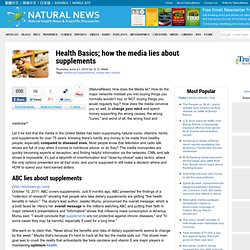 How do the major networks mislead you into buying things you normally wouldn't buy, or NOT buying things you would regularly buy? How does the media convince you so well, to change your mind and spend money supporting the wrong causes, the wrong "cures," and worst of all, the wrong food and medicine? Let it be told that the media in the United States has been suppressing natural cures, vitamins, herbs, and supplements for over 75 years, knowing there's hardly any money to be made from healthy people, especially compared to diseased ones.

Most people know that television and radio talk shows are full of crap when it comes to nutritional advice, or do they? ( 10, 2011: ABC covers supplements: Just 8 months ago, ABC presented the findings of a "collection of research" showing that people who take dietary supplements are getting "few health benefits in return. " Then, Dr. 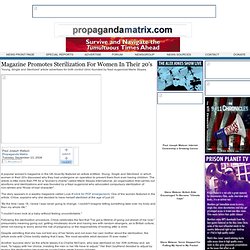