Learning and Scientific Reasoning. Stendhal on the Seven Stages of Romance and Why We Fall Out of Love: Timeless Wisdom from 1822. That Uplifting Tweet You Just Shared? A Russian Troll Sent It. Internet trolls don’t troll. 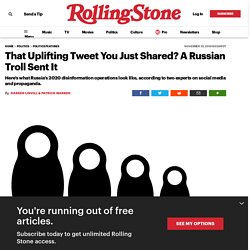 Not the professionals at least. Professional trolls don’t go on social media to antagonize liberals or belittle conservatives. They are not narrow minded, drunk or angry. They don’t lack basic English language skills. They certainly aren’t “somebody sitting on their bed that weighs 400 pounds,” as the president once put it. Professional trolls, on the other hand, are the tip of the spear in the new digital, ideological battleground. On August 22, 2019, @IamTyraJackson received almost 290,000 likes on Twitter for a single tweet. The purpose of the Tyra account, we believe, was not to spread heartwarming messages to Americans. We’ve spent the past two years studying online disinformation and building a deep understanding of Russia’s strategy, tactics, and impact. Professional trolls are good at their job. Disinformation operations aren’t typically fake news or outright lies. Deep Stuff (behind our thoughts) Explanations > The SIFT Model > Deep Stuff (behind out thoughts) Needs | Memories | Beliefs | Mental models | Values | Goals | Emotional state | So what? 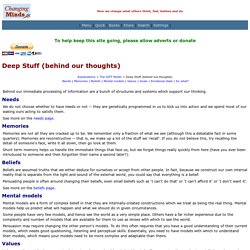 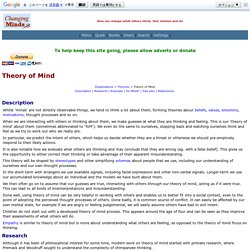 Theories about trust. Why You Love The Way You Do. The data show that how we connect with romantic partners changes as we age. People who think their opinions are superior to others are most prone to overestimating their relevant knowledge and ignoring chances to learn more. By guest blogger Tom Stafford We all know someone who is convinced their opinion is better than everyone else’s on a topic – perhaps, even, that it is the only correct opinion to have. 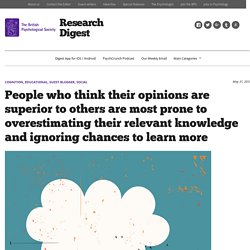 This is what Michael Hall and Kaitlin Raimi set out to check in a series of experiments in the Journal of Experimental Social Psychology. The researchers distinguish “belief superiority” from “belief confidence” (thinking your opinion is correct). As well as simple background knowledge, the researchers were also interested in how people with belief superiority sought out new information relevant to that belief. Overall the research presents a mixed picture. How AI could transform the way we measure kids' intelligence. There is a saying in education that you treasure what you measure.

Going by the standardized tests that dominate schools in many countries around the world, we’re teaching children that we value only a very narrow definition of intelligence—the ability to solve word problems about train times, or identify the purpose of a World War I treaty on a multiple-choice test. The truth is human intelligence is vast and complex. Yet it is measured—and valued—crassly. And in an age when artificial intelligence is capable of nailing IQ tests and mastering knowledge-based curricula, humans may be setting ourselves up to be outshone by technology. How did the news go ‘fake’? When the media went social.

The Collins Dictionary word of the year for 2017 is, disappointingly, “fake news”. 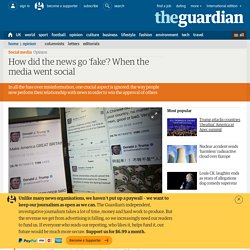 We say disappointingly, because the ubiquity of that phrase among journalists, academics and policymakers is partly why the debate around this issue is so simplistic. The phrase is grossly inadequate to explain the nature and scale of the problem. (Were those Russian ads displayed at the congressional hearings last week news, for example?) But what’s more troubling, and the reason that we simply cannot use the phrase any more, is that it is being used by politicians around the world as a weapon against the fourth estate and an excuse to censor free speech. Definitions matter. Social media force us to live our lives in public, positioned centre-stage in our very own daily performances. False, Misleading, Clickbait-y, and Satirical “News” Sources.

The tricks propagandists use to beat science. Back in the 1950s, health professionals became concerned that smoking was causing cancer. 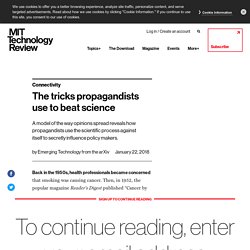 Then, in 1952, the popular magazine Reader’s Digest published “Cancer by the Carton,” an article about the increasing body of evidence that proved it. The article caused widespread shock and media coverage. Today the health dangers of smoking are clear and unambiguous. And yet smoking bans have been slow to come into force, most having appeared some 40 years or more after the Reader’s Digest article. 5 things the media does to manufacture outrage. Philosophy in the Contemporary World: Sounds of Silence, or Are We Responsible for What We Avoid Saying?

By Elisabeth Camp Recent testimony by James Comey and Jeff Sessions before the Senate Intelligence Committee offers fertile terrain for anyone interested in the nuances of verbal communication. 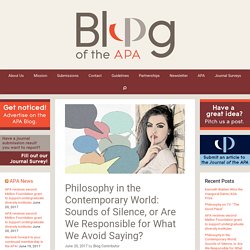 'I was shocked it was so easy': ​meet the professor who says facial recognition ​​can tell if you're gay. Vladimir Putin was not in attendance, but his loyal lieutenants were. 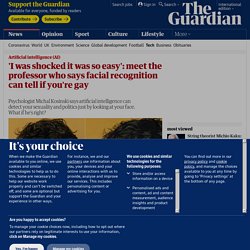 On 14 July last year, the Russian prime minister, Dmitry Medvedev, and several members of his cabinet convened in an office building on the outskirts of Moscow. On to the stage stepped a boyish-looking psychologist, Michal Kosinski, who had been flown from the city centre by helicopter to share his research. “There was Lavrov, in the first row,” he recalls several months later, referring to Russia’s foreign minister. “You know, a guy who starts wars and takes over countries.” Kosinski, a 36-year-old assistant professor of organisational behaviour at Stanford University, was flattered that the Russian cabinet would gather to listen to him talk. Brain Spine. Escapades. Eternity. Quantumly. Edgy. Intelligences Ensemble. Multiple Intelligences.