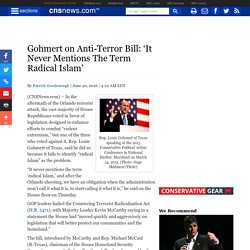 Louie Gohmert of Texas speaking at the 2013 Conservative Political Action Conference in National Harbor, Maryland on March 14, 2013. (Photo: Gage Skidmore/Flickr) (CNSNews.com) – In the aftermath of the Orlando terrorist attack, the vast majority of House Republicans voted in favor of legislation designed to enhance efforts to combat “violent extremism,” but one of the three who voted against it, Rep. Louie Gohmert of Texas, said he did so because it fails to identify “radical Islam” as the problem. “It never mentions the term ‘radical Islam,’ and after the Orlando shooting, we have an obligation when the administration won’t call it what it is, to start calling it what it is,” he said on the House floor on Thursday. GOP leaders hailed the Countering Terrorist Radicalization Act (H.R. 5471), with Majority Leader Kevin McCarthy saying in a statement the House had “moved quickly and aggressively on legislation that will better protect our communities and the homeland.” 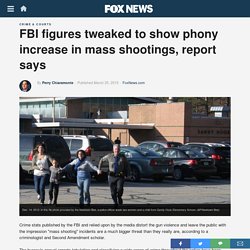 (AP/Newtown Bee) Crime stats published by the FBI and relied upon by the media distort the gun violence and leave the public with the impression "mass shooting" incidents are a much bigger threat than they really are, according to a criminologist and Second Amendment scholar. The bureau's annual reports tabulating and classifying a wide range of crime throughout the nation have been historically free of politics, but John Lott, president of the Crime Prevention Research Center, said the latest statistics contain numbers that are misleading at best and deliberately fudged at worst. Lott believes the numbers may have been presented to overstate for political purposes the true risk of being a victim of random gun crimes.

“Since 1976, there have been ups and downs in incidents but there has been no trend upward or downward in mass shootings.”- Prof. TIME Justifies Ferguson Violence as Response to White Privilege: "Riots Are a Necessary Part of Evolution of Society" For one TIME magazine writer, the acts of violence in Ferguson are an entitlement for those suffering racism. 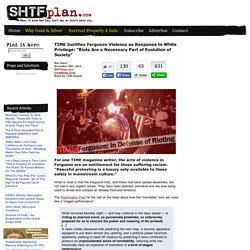 “Peaceful protesting is a luxury only available to those safely in mainstream culture.” What is clear is that the Ferguson riots, and those that have spread elsewhere, are not real in any organic sense. They have been planned, provoked and are now being used to divide and conquer an already fractured America. The Washington Post hit the nail on the head about how the “inevitable” riots are more like a “staged performance”: What occurred Monday night — and may continue in the days ahead — is rioting as planned event, so pervasively predicted, so extensively prepared for as to obscure the power and meaning of the protests. [...] Incredibly, Obama himself commented that the Ferguson riots would make for good television spectacle: “There is inevitably going to be some negative reaction, and it’ll make for good TV,” Obama said. Establishment Media Openly Defend Rioting as Ferguson Burns. After months of fomenting strife, hate, and unrest surrounding the fatal shooting of Michael Brown by police officer Darren Wilson in Ferguson, Missouri, the increasingly discredited establishment press — Time magazine, in particular, but others too — has taken it to the next level. 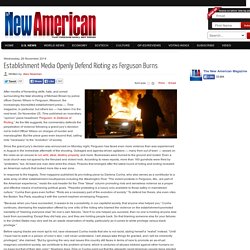 On November 25, Time published an incendiary “opinion” piece headlined “Ferguson: In Defense of Rioting.” As the title suggests, the commentary defends the perpetration of violence following a grand jury’s decision not to indict Officer Wilson on charges of murder and manslaughter. But the piece goes even beyond that, calling riots “necessary” to the “evolution” of society. Since the grand jury’s decision was announced on Monday night, Ferguson has faced even more violence than was experienced in August in the immediate aftermath of the shooting. Outraged and agenda-driven agitators — many from out of town — seized on the news as an excuse to run wild, steal, destroy property, and more.

Related articles: St. Informed Americans Are Domestic Terrorists - Police Trained Nationwide. Law enforcement across the country are being educated that informed Americans who know their rights are dangerous and that cops are their enemy Paul Joseph Watson, Kurt Nimmo & Alex JonesPrison Planet.com Friday, March 13, 2009 A secret report distributed by the Missouri Information Analysis Center lists Ron Paul supporters, libertarians, people who display bumper stickers, people who own gold, or even people who fly a U.S. flag and equates them with radical race hate groups and terrorists. 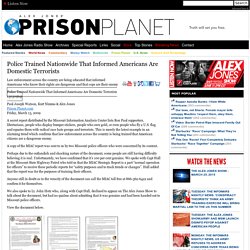 This is merely the latest example in an alarming trend which confirms that law enforcement across the country is being trained that American citizens are a dangerous enemy. A copy of the MIAC report was sent to us by two Missouri police officers who were concerned by its content. Redefinition of 'terrorist' - Homeland Security Report.