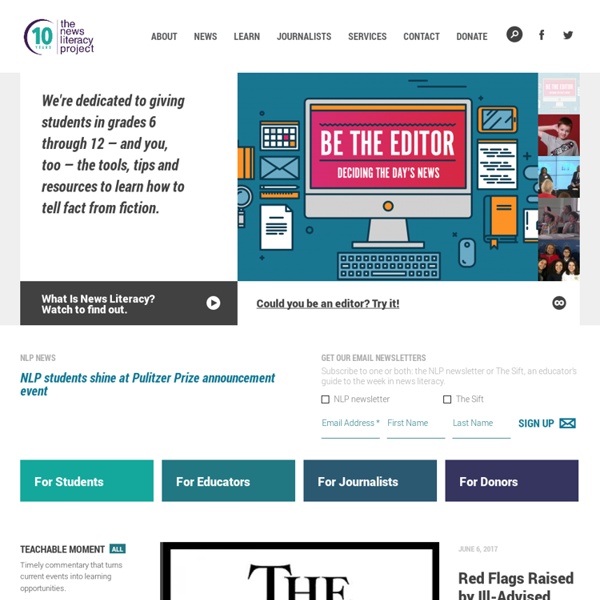 Special Report: The Changing Face of Literacy There has never been a generation of young people more immersed in digital media than this one, many of whom learned to use a mobile device before they even started school. This special report examines how literacy instruction is changing in the digital age, from learning to sound out words in elementary school to grappling with “Macbeth” in high school. It finds that, while experts quibble over what it means to be digitally literate, they agree on one thing: even the youngest children should be learning literacy with a mix of print and digital texts. Is the digital revolution transforming literacy instruction in the nation’s schools? Should it? In a new report, Education Week takes a look.

The Definitive List of 176 Fake News Sites on Facebook Fake news is unavoidable. While the idea of “fake news” was born out of the very real instances of fake news stories helping sway the election in favor of now-President Donald Trump, it has since been co-opted by Trump’s administration to be used as a weapon to sow doubt in legitimate media stories that they find unappealing. But real fake news—not the kind Trump likes to point out on Twitter virtually every day—is pervasive. And if you care about reading truthful stories, you need to be on high alert. Facebook, a primary driver of traffic to publications, came under fire late last year for allowing the promotion of fake news sites that deal in conspiracy theories rather than facts.

Fake News - Resources from Harvard Skip to main content Fake News, Misinformation, and Propaganda This page provides background information, links, and tools from outside organizations to help guide users in navigating potential fake news A Visual Take The Institute for Creation Research Can Life Exist on Other Planets? Many people make a distinction between the origin of life and the evolution of life. In this view, biological evolution refers to the gradual development of the diversity of living things from a common ancestor, while the ultimate origin of life is a separate question. This is a legitimate point, but evolution is about much more than just biology. The evolutionary worldview is that all of physical existence, both living and non-living, arose through purely natural processes. With this broad definition of evolution, abiogenesis--the spontaneous appearance of life from non-living matter--is a necessity.

Bias already exists in search engine results, and it’s only going to get worse The internet might seem like a level playing field, but it isn’t. Safiya Umoja Noble came face to face with that fact one day when she used Google’s search engine to look for subjects her nieces might find interesting. She entered the term “black girls” and came back with pages dominated by pornography. Noble, a USC Annenberg communications professor, was horrified but not surprised. For years she has been arguing that the values of the web reflect its builders—mostly white, Western men—and do not represent minorities and women. Her latest book, Algorithms of Oppression, details research she started after that fateful Google search, and it explores the hidden structures that shape how we get information through the internet.

Stony Brook Center for News Literacy The full News Literacy course, developed at Stony Brook University, organizes the material into 8 concepts that are spread amongst our 14 week course that take students from the first information revolution of Johannes Gutenberg's printing press to the Digital Age of Mark Zuckerberg's Facebook. Each lesson stands alone or can easily be integrated into your program. Below, find a summary of each of those lessons, and a link to the most updated version of the teaching materials for each from our professors at Stony Brook University. Fake News Or Real? How To Self-Check The News And Get The Facts : All Tech Considered Guido Rosa/Getty Images/Ikon Images Fake news stories can have real-life consequences. On Sunday, police said a man with a rifle who claimed to be "self-investigating" a baseless online conspiracy theory entered a Washington, D.C., pizzeria and fired the weapon inside the restaurant. So, yes, fake news is a big problem.

The End of Reality In a dank corner of the internet, it is possible to find actresses from Game of Thrones or Harry Potter engaged in all manner of sex acts. Or at least to the world the carnal figures look like those actresses, and the faces in the videos are indeed their own. Everything south of the neck, however, belongs to different women. An artificial intelligence has almost seamlessly stitched the familiar visages into pornographic scenes, one face swapped for another. The genre is one of the cruelest, most invasive forms of identity theft invented in the internet era. #alternativefacts Propaganda (noun): Information that is often exaggerated or false and spread for the purpose of benefiting or promoting a specific individual or cause. Fake news is, quite simply, news (“material reported in a newspaper or news periodical or on a newscast”) that is fake (“false, counterfeit”) - #alternativefacts Spin Journalism (noun): News and information that is manipulated or slanted to affect its interpretation and influence public opinion.