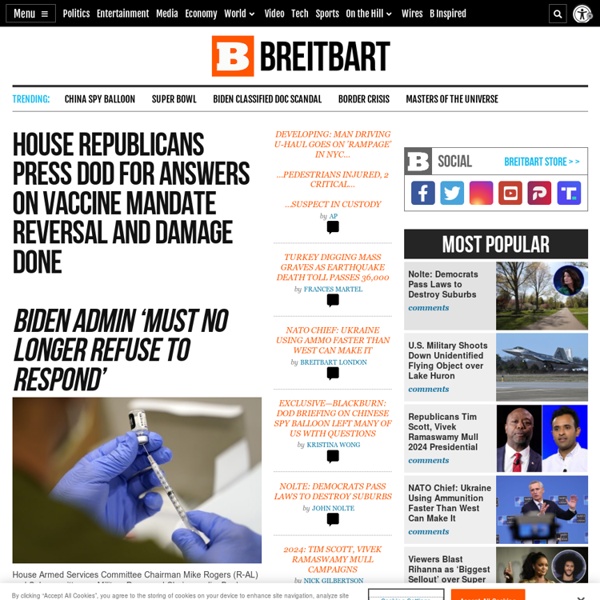 The much-hyped bipartisan Ryan-Murray budget “deal” struck late last year increases the national debt $6.4 trillion over the next ten years. It does nothing to change the trajectory of our growing debt at a time when it is among the greatest national security threats facing our nation. The “deal” also increases near term federal spending with a promise of future cuts (dubious) while raising taxes on airline passengers. Worse, it features a cut in pension benefits to current military members and veterans who earned those pensions in measures of blood and sweat. I voted against it. by Rep. Jim Bridenstine 44

About Me - Sara A. Carter Sara is a thespian who studied with the London Academy of Music and Dramatic Art (LAMDA) and practices foreign accents to embarrass her family in public settings. Sara A. Carter is a national and international award-winning investigative reporter whose stories have ranged from national security, terrorism, immigration and front line coverage of the wars in Afghanistan and Iraq. She is currently the senior national security correspondent for web-based Circa News, working on major projects in conjunction with Sinclair Broadcast Group affiliates across the nation.

South Carolina On a Sunday morning appearance on “Fox & Friends,” conservative columnist Ann Coulter explained why Romney fell short in the South Carolina GOP presidential primary, blaming the priorities of South Carolina voters for Gingrich’s success. “Apparently, South Carolinians would rather have the emotional satisfaction of a snotty remark toward the president than to beat Obama in the fall,” Coulter, the author of “Demonic: How the Liberal Mob Is Endangering America,” said. “We saw it in the debates when Gingrich would say things that didn’t really make sense. That is what you usually associate with Democrats, which I described in my last book, ‘Demonic,’ how mobs behave.” WikiLeaks soldier 'forced to strip naked' North America correspondent Craig McMurtrie Updated Sat 5 Mar 2011, 1:41am AEDT Supporters of an American army analyst accused of leaking hundreds of thousands of classified US cables say new charges levelled against him may be designed to force a confession or to get him to implicate others. US military prosecutors have added 22 extra charges including a count of aiding the enemy, which is punishable by death. But US legal experts say the charge is ill-defined and supporters of Private Bradley Manning say he is still suffering degrading treatment at the hands of his military jailers.

Senator Durbin and the Corruption of the English Language Some choice nonsense from Senator Durbin: Sen. Durbin on “chain migration”:“I said to the president, ‘Do you realize how painful that term is to so many people? African-Americans believe that they migrated to America in chains. South Carolina Primary: Newt Gingrich Will Defeat Mitt Romney, ABC News Projects <br/><a href=" US News</a> | <a href=" Business News</a> Copy Newt Gingrich defeated Mitt Romney today to win today's South Carolina primary, boosted by a fiery debate performance this week that deflated the former governor's front-runner status overnight. Rick Santorum will place third and Ron Paul will be fourth first-in-the-South contest. Propelled by voters who were heavily influenced by the pre-primary debates, and a strong evangelical showing, Gingrich claimed a landslide victory, winning virtually every county in the Palmetto State save for a handful that went to Romney.

WikiLeaks and Libya 2009: Qaddafi's Son Saif Makes His Move Libyan leader Muammar Qaddafi's son Saif Al Islam claiming a prominent role in the current crisis, making the rounds of the media to promote the regime position. This cable from the US Embassy in Tripoli in December 2009 offers a glance at Saif's move to expand his political influence, with his staff lobbying American diplomats for sales of military equipment: "he concerted attention that xxxxxxxxxxxx devoted to military and security issues during recent meetings with Emboffs suggests that Saif is beginning to insert himself into the political-military and security spheres." NOFORNSIPDISSTATE FOR NEA/MAGE.O. 12958: DECL: 12/14/2019TAGS: PREL PGOV PINR KACT MCAP MASS LYSUBJECT: SAIF AL-ISLAM'S STAFF REACHES OUT ON POL-MIL ISSUESREF: A) TRIPOLI 941; B) TRIPOLI 924; c) TRIPOLI 208

CREEPS ON A MISSION: Michael Horowitz is Really Investigating the Investigators Since at least July 2016, the upper echelon of the FBI and the Department of Justice began a stealth operation—with the complicity if not instigation of President Obama—to taint and destroy Candidate Trump with a concocted “Russia collusion” narrative. Michael Horowitz, the Inspector General of the Department of Justice, has been running a little-watched parallel investigation that is already producing results—when he is not manipulated or overborn by Robert Mueller. His name is not familiar to most Americans, but Mr. Horowitz has played an important role since President Obama named him Inspector General (IG) for the Department of Justice in 2012. Congress mandated the position of IG for every major federal agency.

'Common Sense Coalition' sets centrist Senate tone Senators in the 25-member Common Sense Coalition on Monday said their work in developing a deal to help end the government shutdown shows the road to getting big-ticket items passed in the future needs to run through the middle of both parties, rather than the extremes. Though senators in the bipartisan group cautioned that the final deal to fund the government through Feb. 8 was ultimately brokered by their respective leaders, Majority Leader Mitch McConnell and Minority Leader Charles E. Schumer, the coalition’s input was critical in helping break the stalemate. Mr.