Four Inquiry Qualities At The Heart of Student-Centered Teaching. One powerful example of students taking on a different role in the classroom happens when teachers use the United Nations Global Goals for Sustainable Development as a framework for inquiry. Students explore their passions, interests, and curiosities based on the 17 U.N. goals, identifying learning objectives connected to a particular goal where they’d like to focus.

Teachers then co-design standards with learners, standards with language such as gaining a deeper understanding of "x" or inspiring an audience to “do y.” Students achieve a more genuine ownership over their learning as they grapple with these authentic problems -- ones that have troubled global leaders for decades. In these spaces students take on more of the heavy lifting of learning as they are actively involved in the construction of understanding.

The real 'fake news': how to spot misinformation and disinformation online. So you think a story, photo or video you've seen online might be fake — or exaggerated, at least. 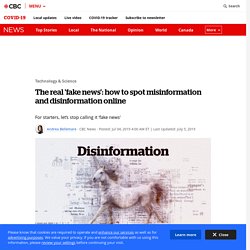 Maybe you spotted a photo that's generating outrage or ridicule, or a headline that seems too bizarre to be accurate. Fighting the Infodemic: New Strategies for News Literacy. Evaluating sources - Evaluating Sources: ACT UP - Research Guides at Salem State University. Home - The WHY Method: An Updated Approach to Source Evaluation - Research Guides at Eastern Washington University. Addressing Bias in Research Instruction. Addressing Bias in Research Instruction. How to Teach Students Historical Inquiry Through Media Literacy And Critical Thinking. “I think that the lessons of history are exactly the kind of thing we should be talking about in history class,” Wineburg said. 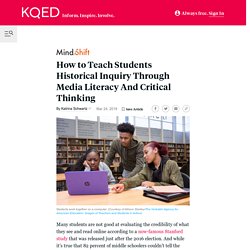 “But rather than teaching them as rules or things fixed in time or set in amber, these are precisely the kinds of things that are worthy of debate.” Today, most people look up information they don’t know on the internet, including students. So it’s even more important that students have tools they can use to make educated decisions about what they trust online. Will Colglazier, a U.S. history teacher in the San Mateo Union High School District, is taking this call to action to heart at Aragon High School. He, like so many teachers, feels pressure to cover all his content and keep to the pacing guides, but he also thinks students need fundamental digital literacy skills in order to continue learning history into the future. How Your Teacher-Librarian Can Be An Ally When Teaching With Inquiry. Teacher-Librarians Have More Flexible Schedules The librarian’s schedule and workday provide more flexibility so they can be available to help teachers.

Check, Please! Starter Course. Getting Beyond the CRAAP Test: A Conversation with Mike Caulfield. I have been a fan of Mike Caulfield's work in developing new tools for helping students learn the skills of digital literacy and fact checking for quite some time. 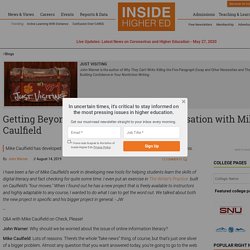 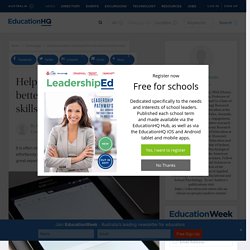 While this may be the case in young people’s social networking, gaming and the like, it is not necessarily the case in their academic lives. In fact, when it comes to using technology for academic tasks, it appears that lots of students display all the hallmarks of a novice. Leyton Schnellert. How Do We Ready Kids for the Next Generation of Fake News? Telling the difference between real and “fake” news can be tricky for even the savviest media critic. 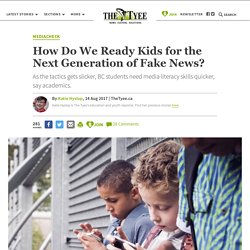 But it’s about to get much harder, thanks to new technologies that may be sophisticated enough in manipulating video and audio that you’d be hard-pressed not to believe former U.S. president George W. Bush had a facial tick. WNYC’s RadioLab podcast takes a dire look at these technologies, including new software that the company Adobe hopes will be the Photoshop of audio editing. But the show’s producers were unable to find a media critic, creator or scientist with an easy answer to detecting this new kind of news fakery. The only offered “solution” is to rely on the tech savvy teenagers of today to find the answer. The CCRAP Sheet online. Why Kids Need Data Literacy, and How You Can Teach It. Samantha Viotty’s activity for visualizing data networks has gummy bears representing people and toothpicks signifying their relationships. 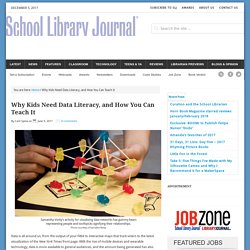 Photo courtesy of Samatha Viotty Data is all around us, from the output of your Fitbit to interactive maps that track voters to the latest visualization of the New York Times front page. With the rise of mobile devices and wearable technology, data is more available to general audiences, and the amount being generated has also exploded. According to IBM, 90 percent of the world’s data has been created in the last two years. This vast pool of information is being used to advocate for change, justify decisions, and suggest personal action plans—such as the U.S. Using Essential Questions in the Classroom for the Best Learning Ever. When we first put the driving question of a lesson to the students, the goal is to begin a lively discussion with them. In this discussion, we guide them beginning with what they think or “assume” they already know about what the question is asking.

Encourage them to speak openly and share ideas about the issues that are being posed by the question. The students begin to realize that finding an answer is not always easy, but certainly not impossible with the right mindset. As things begin to pick up steam, think about using essential questions that will moderate and expand the discussion. Rainbows in the Stacks: Many Ways to Meet the Needs of LGBTQ Library Patrons — Articles. Editor’s Note: This commentary by librarian Anna Call is part of our special focus on LGBTQ issues for the month of June. 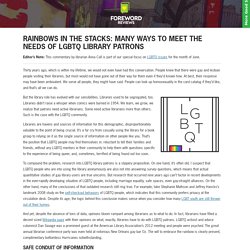 Thirty years ago, which is within my lifetime, we would not even have had this conversation. People knew that there were gay and lesbian people visiting their libraries, but most would not have gone out of their way for them even if they’d known how. At best, their response may have been ambivalent. We serve all people, they might have said. Fostering Student Questions: Strategies for Inquiry-Based Learning.

Ramsey Musallam’s TED Talk on his "3 Rules to Spark Learning" inspires the need to foster students' curiosity. As educators, we want them to ask questions and explore their ideas, which can lead to a rich inquiry-based classroom. From young children whose mantra for everything is "Why? " to teens that require effective inquiry skills as part of their preparation for successful post-secondary life, this need is high. Eval websites. The CRAAP test - Evaluating Web Resources - LibGuides at North Carolina Agricultural & Technical State University. Currency: the timeliness of the information When was the information published or posted? 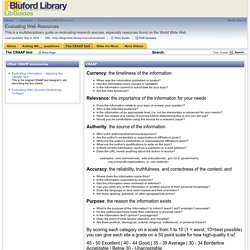 Has the information been revised or updated? Is the information current or out-of date for your topic? Are the links functional? A Quick 3-Point Reference Guide for Making Any Question Essential. An essential question is an incredibly powerful tool for discovery learning and critical thinking skill development. 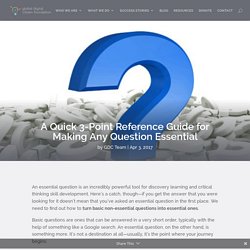 It doesn't have to be this way. Fake news is actually really easy to spot -- if you know how. Consider this your New Media Literacy Guide. 1. Does the story come from a strange URL? Zimdars says sites with strange suffixes like ".co" or ".su," or that are hosted by third party platforms like WordPress should raise a red flag. 10 Ways to Spot a Fake News Article - EasyBib Blog.

If you do read the newspaper, you’re misinformed.” Trustworthy advice for a post-truth world - University of Alberta. False, Misleading, Clickbait-y, and Satirical “News” Sources. 10 Ways to Search Google for Information That 96% of People Don’t Know About. UW class on how to spot fake data goes viral within hours. Two University of Washington professors are taking aim at BS in a provocatively named new course they hope to teach this spring. The professors would like to push the course materials online — teaching it as a MOOC, for example, a freely available course taught over the web. When it came to picking a title for the course they will teach this spring, University of Washington professors Carl Bergstrom and Jevin West decided to abandon academic stodginess and get edgy.

Identifying Fake News: An Infographic and Educator Resources - EasyBib Blog. 5 Ways Teachers Are Fighting Fake News : NPR Ed. Students in Scott Bedley's fifth-grade class at Plaza Vista School in Irvine, Calif., play a version of "Simon Says" with fake news. Courtesy of Scott Bedley hide caption. In the war on fake news, school librarians have a huge role to play - The Verge. Concern about the prevalence of fake or sensationally biased news sources has escalated in the days following the presidential election, with many citing it as a factor (some even the primary cause) of Donald Trump’s win. The central focus of the concern is Facebook, which has grown beyond a social platform and is now a key information distributor from which 44 percent of Americans get their news.

Though Mark Zuckerberg stated publicly that the idea that fake news on Facebook influenced the election was “crazy,” a BuzzFeed News report uncovered that people within his own company consider this response flippant and are busy organizing in secret to dig into the data and make recommendations to senior leadership. How To Spot Fake News. Critical thinking is a key skill in media and information literacy, and the mission of libraries is to educate and advocate its importance. Discussions about fake news has led to a new focus on media literacy more broadly, and the role of libraries and other education institutions in providing this. In the war on fake news, school librarians have a huge role to play - The Verge. Ultimate Critical Thinking Cheat Sheet. The Challenges and Realities of Inquiry-Based Learning. 10 Tips for Planning an Inquiry-Based Start to the New School Year – Making Good Humans.

How Teens Benefit From Reading About the Struggles of Scientists. Using Primary Sources as a Form of Social Justice by Samantha Cutrara. Study Ties College Success to Students’ Exposure to a High School Librarian. Tween Online Habits, Revealed. How to Spark Curiosity in Children Through Embracing Uncertainty. Why Inquiry Learning is Worth the Trouble. Do You have the Personality To Be an Inquiry-Based Teacher? How to Bring Playfulness to High School Students. The Thrill of Converting Math-Haters Into Appreciators Through Inquiry. Inquiry Learning Vs. Standardized Content: Can They Coexist? Math and Inquiry: The Importance of Letting Students Stumble. Librarians on the Fly: Apps for the Inquiry Process. How to Spark Curiosity in Children Through Embracing Uncertainty. High Tech Reflection Strategies Make Learning Stick.