Information available on PebbleGo and Britannica

BREC's Baton Rouge Zoo - The #1 Family Year-Round Attraction in Baton Rouge! Denver Zoo. Adaptations Built for Speed Cheetahs are not heavy, powerful animals like other big cats, so they rely on speed to catch prey and escape danger. 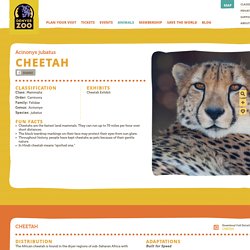 They have long legs and a slender build, plus a very flexible spine that helps them take long strides as they run. The long tail helps cheetahs keep their balance when running at top speed or when making sharp turns as they pursue prey. Unlike other cats, the claws are not covered by a sheath, and they are only partially retractable. Stalk and Sprint The cheetah’s tan coloration and black spots helps it blend into the grassland habitat. Unique Cats Cheetahs are very unique cats; they are about the same size as leopards but much thinner.

Conservation Connection IUCN Status: Vulnerable. The IUCN classifies also classifies the Asiatic subspecies as critically endangered, and the African subspecies as endangered. Saint Louis Zoo. Racy Cat The cheetah is the fastest land animal in the world, sprinting up to 70 miles per hour! 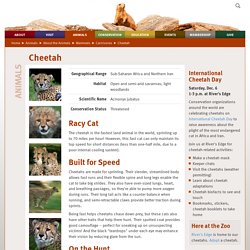 However, this fast cat can only maintain its top speed for short distances (less than one-half mile, due to a poor internal cooling system). Built for Speed Cheetahs are made for sprinting. Their slender, streamlined body allows fast runs and their flexible spine and long legs enable the cat to take big strides. Being fast helps cheetahs chase down prey, but these cats also have other traits that help them hunt. On the Hunt Early morning and late afternoon are prime hunting times for cheetahs. Once a cheetah has selected its prey, the chase begins! Cheetahs usually eat every two to five days. Not Your Average Kittens For cheetahs, the peak season for births is March through June (though they can breed any time of year). During the first few weeks of life, the mother moves her cubs often to avoid enemies. Cheetah - Philadelphia Zoo. Spidi: Male, born September 16, 2001 at the Cango Wildlife Ranch in South Africa. 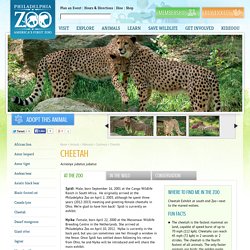 He originally arrived at the Philadelphia Zoo on April 2, 2003, although he spent three years (2012-2015) meeting and greeting female cheetahs in Ohio. We’re glad to have him back! Spidi is currently on exhibit. Nyika: Female, born April 22, 2000 at the Wassenaar Wildlife Breeding Centre in the Netherlands. She arrived at Philadelphia Zoo on April 10, 2012. Viewing Hints Most active in the early morning. The cheetah has a small head, high set eyes and small, flattened ears. Longevity A typical lifespan for cheetahs in zoos is 12-15 years. Cheetahs. Cheetah. 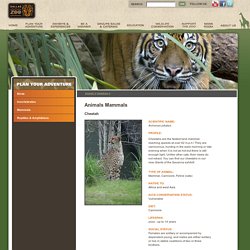 They are carnivorous, hunting in the early morning or late evening when it is not as hot but there is still enough light. African Cheetah. A Need for Speed Cheetahs are not strong predators, but they are fast. 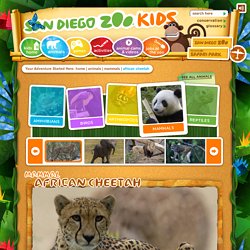 They rely on their speed, which can reach 70 mph, to catch their prey. Everything about the cheetah is built for speed, from their non-retractable claws that act like cleats for traction, to their long tail that works like a rudder to help them change directions quickly. Cheetahs are also known for their spotted coat. The dots are both small and large, and the pattern of spots is unique to each cheetah. Cheetah. Our first cheetahs The San Diego Zoo received it first cheetah, named Bong, in 1933, a gift from famed animal adventurers Martin and Osa Johnson. 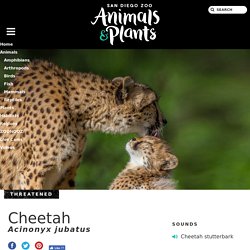 They had made him a pet, taking him for walks in New York’s Central Park, and our Zoo staff did the same for him when he arrived in San Diego. Our member magazine, ZOONOOZ, reported that Bong “was very tame and friendly, did not resent being touched by strangers, but he was stubborn when out on a leash, and if he took a sudden notion to run, you simply ran with him or let go for there was no holding him back.”

As we had had no luck in successfully breeding cheetahs, the San Diego Zoo Safari Park brought in 10 wild-caught South African cheetahs (5 males and 5 females) from southwest Africa to be the core of a new breeding group in 1970 with a grant from the William H. Donner Foundation. Houston Zoo. Cheetah Fact Sheet. Order: Carnivora Family: FelidaeGenus and Species:Acinonyx jubatus Physical Description Built more like greyhounds than typical cats, cheetahs are adapted for brief but intense bursts of speed. 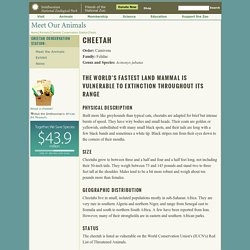 They have wiry bodies and small heads. Their coats are golden or yellowish, embellished with many small black spots, and their tails are long with a few black bands and sometimes a white tip. Black stripes run from their eyes down to the corners of their mouths. Size Cheetahs grow to between three and a half and four and a half feet long, not including their 30-inch tails. Geographic Distribution Cheetahs live in small, isolated populations mostly in sub-Saharan Africa. Status The cheetah is listed as vulnerable on the World Conservation Union's (IUCN's) Red List of Threatened Animals. Habitat Savannas, both open and more densely vegetated, give cheetahs the open areas they need for quick stalks and chases.