Xi Jinping game show: How well do you know China's leader? Image copyright Hunan TV It's dinnertime in China, the evening news has just aired, and primetime TV-watchers are settling down for the real entertainment of the night. 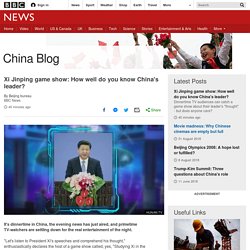 "Let's listen to President Xi's speeches and comprehend his thought," enthusiastically declares the host of a game show called, yes, "Studying Xi in the New Era". The "Xi" - in this instance - is a reference to China's leader Xi Jinping who has steadily tightened his grip over the state. Just one year ago "Xi Jinping thought" - an articulation of his political philosophy - was enshrined in the constitution of the Chinese Communist Party. Nothing like that has happened in a very long time. Can gaming change the face of politics? News BBC News Navigation Sections Previous Next Media player Media playback is unsupported on your device Jump media player. 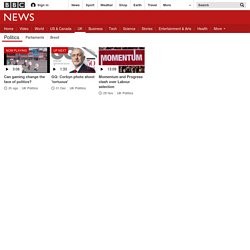 5 Baffling Video Games Based on the Bible. From being able to drown baby Moses in Bible Adventures to losing your good Christian soldiers to the perils of contemporary music and Arabs in Left Behind: Eternal Forces, Christian video games have long and hilariously struggled to preach through the world of gaming. 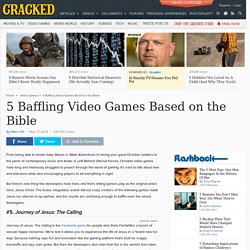 It's hard to talk about love and tolerance while also encouraging players to kill everything in sight. But there's one thing few developers have tried, and that's letting gamers play as the original action hero, Jesus Christ. Left Behind: Eternal Forces. By Allen 'Delsyn' Rausch | Apr 7, 2006 The successful series of Christian-themed novels comes to life as an RTS game that's all about saving souls and kicking butt. 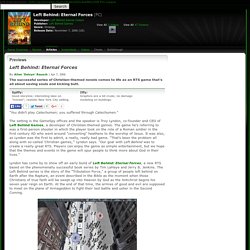 "You didn't play Catechumen; you suffered through Catechumen. " The setting is the GameSpy offices and the speaker is Troy Lyndon, co-founder and CEO of Left Behind Games, a developer of Christian-themed games. The game he's referring to was a first-person shooter in which the player took on the role of a Roman soldier in the first century AD who went around "converting" heathens to the worship of Jesus. It was also, as Lyndon was the first to admit, a really, really bad game.

Persuasive Games: The Expressive Power of Videogames - Ian Bogost. Are video games just propaganda and training tools for the military? It's Monday night, the kids are in bed, and I am trying to kill Osama bin Laden. 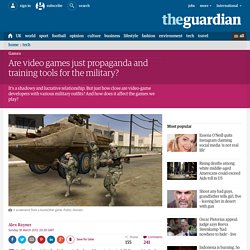 I stalk through his Abbottabad compound and I aim my rifle at the first person I see, only to discover he's my brother in arms, aka "OverdoseRocks". So I walk downstairs into a prayer room, at which point my gun accidentally goes off. Then the mission is over. We were victorious. Next, I join US servicemen during the 2007 surge in Iraq. I have been on the Kuma Games site, an online entertainment developer and, according to reports on Iranian television, an international distributor of military propaganda. The Video-Game Propaganda Wars.

A popular video game begins with a small, tactical team of highly trained commandos on a delicate mission behind enemy lines. 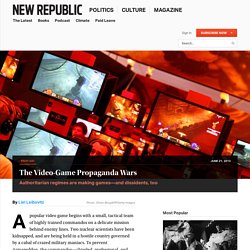 Two nuclear scientists have been kidnapped, and are being held in a hostile country governed by a cabal of crazed military maniacs. To prevent Armageddon, the commandos—chiseled, professional, and patriotic—must blow away hordes of faceless and murderous opponents, brutes as skilled in combat as they are devoted to their extreme ideology. The game is short—only eight levels—so play it through, and you’ll feel proud to belong to the greatest nation on earth. Which is, of course, Iran. The PC game, Special Operation 85, came out in 2007, and is virtually indistinguishable from any American-made, war-themed first person shooter. It isn’t hard to see why. But while Iranians are one target of the new initiative—the government has reportedly funded 140 games to date—Westerners are another. 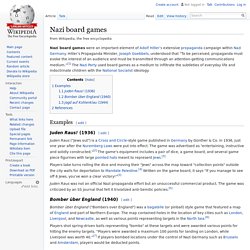 Hitler’s Propaganda Minister, Joseph Goebbels, understood that “To be perceived, propaganda must evoke the interest of an audience and must be transmitted through an attention-getting communications medium.”[1] The Nazi Party used board games as a medium to infiltrate the subtleties of everyday life and indoctrinate children with the National Socialist ideology. Examples[edit] Juden Raus! (1936)[edit] Juden Raus (“Jews out") is a Cross and Circle-style game published in Germany by Günther & Co. in 1936, just one year after the Nuremberg Laws were put into effect. Players take turns rolling the dice and moving their "Jews" across the map toward "collection points" outside the city walls for deportation to Mandate Palestine.[4] Written on the game board, it says “If you manage to see off 6 Jews, you’ve won a clear victory!” The Nazi Olympics Berlin 1936. KEY FACTS Nazi Germany used the 1936 Olympic Games for propagandistic purposes. 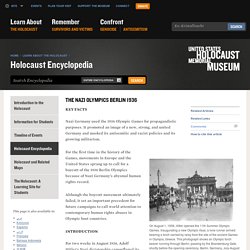 It promoted an image of a new, strong, and united Germany and masked its antisemitic and racist policies and its growing militarism. For the first time in the history of the Games, movements in Europe and the United States sprang up to call for a boycott of the 1936 Berlin Olympics because of Nazi Germany’s abysmal human rights record.

Although the boycott movement ultimately failed, it set an important precedent for future campaigns to call world attention to contemporary human rights abuses in Olympic host countries. INTRODUCTION For two weeks in August 1936, Adolf Hitler's Nazi dictatorship camouflaged its racist, militaristic character while hosting the Summer Olympics. Government Pushes Propaganda Through Video Games. We previously documented that American movies, television and news are dominated by the CIA and other government agencies. 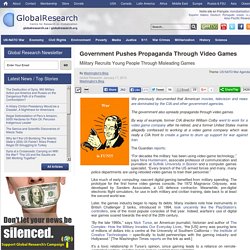 The government also spreads propaganda through video games. By way of example, former CIA director William Colby went to work for a video game company after he retired, and a former United States marine allegedly confessed to working at a video game company which was really a CIA front to create a game to drum up support for war against Iran. The Guardian reports: “For decades the military has been using video-game technology,” says Nina Huntemann, associate professor of communication and journalism at Suffolk University in Boston and a computer games specialist.

“Every branch of the US armed forces and many, many police departments are using retooled video games to train their personnel.”Like much of early computing, nascent digital gaming benefited from military spending. The Christian Science Monitor noted in 2009: ISIS distributing video game that allows players to play role of an Islamist and kill Westerners

ISIS supporters have modified ARMA III so users can play as the militantsJihadi characters are able to kill Westerners and Syrian regime soldiers Also carry out attacks on characters based on Kurdish pershmerga forces Mod is not an official release by Czech developers Bohemia InteractiveBut jihadis are using it to recruit children and radicalise vulnerable, giving it out for free on gaming forums to those declaring support for ISISISIS supporters have previously used popular video games Grand Theft Auto and Call of Duty in their sickening propaganda films By John Hall for MailOnline Published: 10:54 GMT, 3 February 2015 | Updated: 08:17 GMT, 4 February 2015. 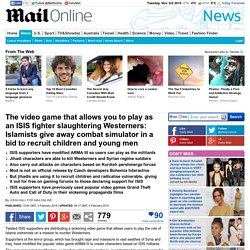 Playing War: How the Military Uses Video Games. According to popular discourse, video games are either the divine instrument of education’s future or the software of Satan himself, provoking young men to carry out all-too-real rampages. Much like discussions surrounding the Internet, debates on video games carry the vague, scattershot chatter that says too much about the medium (e.g. do video games cause violence?) Without saying much at all about the particulars of games or gaming conventions (e.g. how can death be given more weight in first person shooters?).

As Atlantic contributor Ian Bogost argues in his book, How to Do Things with Video Games, we’ve assigned value to games as if they all contain the same logic and agenda. We assume, unfairly, that the entire medium of video games shares inherent properties more important and defining than all the different ways games are applied and played.

War Play moves forward along two intertwined themes. It's a Video Game, and an Army Recruiter. The Army's flagging recruitment numbers are serious business. So Army officials increasingly are turning to a game for help. It is an online, multiplayer video game that they believe will lure teenagers into Army culture, hoping both to educate them about the military and to spark interest in volunteering to serve. The game, dubbed America's Army, employs a realistic and team-oriented approach to give players a sense of what it is like to join the Army, to train how to use weapons and then how to work together on missions. Players progress through the game and its many updates in a variety of ways, learning how to jointly accomplish military tasks while using different skills, such as fighting as an infantryman or saving lives as a medic.