100 Years Of Propaganda: The Good, The Bad and The Ugly 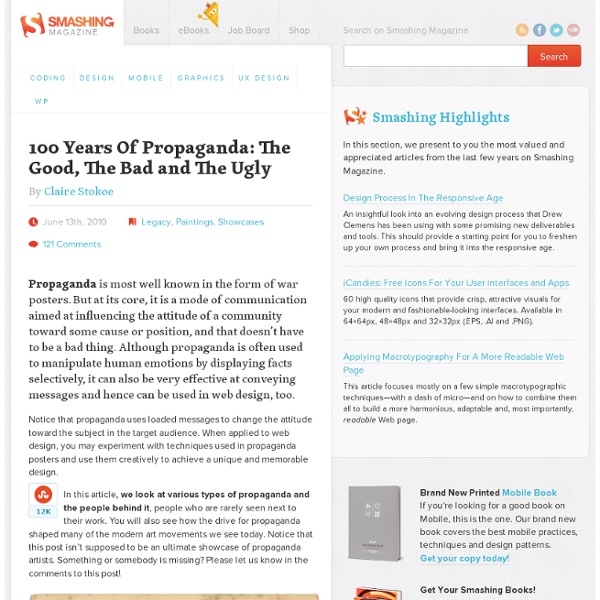 Advertisement Propaganda is most well known in the form of war posters. But at its core, it is a mode of communication aimed at influencing the attitude of a community toward some cause or position, and that doesn’t have to be a bad thing. Notice that propaganda uses loaded messages to change the attitude toward the subject in the target audience. In this article, we look at various types of propaganda and the people behind it, people who are rarely seen next to their work. William Orpen: England, 1917 Orpen studied at the Slade School in London alongside the likes of Augustus John and Wyndham Lewis. Dimitri Moor: Russia, 1917–1921 Dimitri Moor (or Dmitry Stakhievich Orlov) changed the face of graphic design in Soviet Russia back in 1918. A lot of Moor’s artwork was restricted to black and red. This is a lesser known poster by the artist, appealing for help for those staving from the Russian famine in 1920. El Lissitzky: Russia, 1920 Beat the Whites With the Red Wedge, 1920 J. Last Click Related:  Propaganda & posters

War, Propaganda and the Media: A Detailed Primer on the Tactics of Modern War Propaganda - FrontMotion Firefox Republished from globalissues.org By Anup Shah We must remember that in time of war what is said on the enemy’s side of the front is always propaganda, and what is said on our side of the front is truth and righteousness, the cause of humanity and a crusade for peace. — Walter Lippmann Probably every conflict is fought on at least two grounds: the battlefield and the minds of the people via propaganda. Elements of Propaganda Propaganda can serve to rally people behind a cause, but often at the cost of exaggerating, misrepresenting, or even lying about the issues in order to gain that support. While the issue of propaganda often is discussed in the context of militarism, war and war-mongering, it is around us in all aspects of life. As the various examples below will show, common tactics in propaganda often used by either side include: Some of the following sections look into how propaganda is used in various ways, expanding on the above list of tactics and devices. Back to top — U.S. 1. 2. 3.

17 Techniques For Driving Traffic To Your Blog - Flock Driving massive amounts of search engine traffic to your blog can be a lot easier than you think, it really depends on some key factors like the niche you've chosen, your marketing and SEO techniques and even how dedicated a blogger you are, to name a few. There are billions of search queries per day across major search engines and you need to be taking advantage of this consistent and predictable source of traffic if you truly want to dominate your niche. So here are 17 techniques to put in action and practice to help you rank higher in search engines and attract tons of relevant visitors to your blog. 1. Google has since started using loading time as a factor to rank a site's authority in search engines. 2. 3. This is extremely important and a poorly coded site can prevent search engine crawlers from effectively indexing your site. 4. 5. 6. 7. 8. 9. Use the Google Trends tool to find out what people are searching for and a history of trending search topics. 10. 11. 12. 13. 14. 15. 16.

God particle signal is simulated as sound 23 June 2010Last updated at 00:25 By Pallab Ghosh Science correspondent, BBC News The Higgs boson particle is thought to give all others their mass Scientists have simulated the sounds set to be made by sub-atomic particles such as the Higgs boson when they are produced at the Large Hadron Collider. Their aim is to develop a means for physicists at Cern to "listen to the data" and pick out the Higgs particle if and when they finally detect it. Dr Lily Asquith modelled data from the giant Atlas experiment at the LHC. She worked with sound engineers to convert data expected from collisions at the LHC into sounds. "If the energy is close to you, you will hear a low pitch and if it's further away you hear a higher pitch," the particle physicist told BBC News. "If it's lots of energy it will be louder and if it's just a bit of energy it will be quieter." The £6bn LHC machine on the Swiss-French border is designed to shed light on fundamental questions in physics.

Top 10 World War II (WWII) Propaganda Posters - FrontMotion Firefox Although the First World War technically took place in the same century, World War II was undoubtedly the war of the 20th Century. Unlike the earlier conflict, which was a culmination of events deeply rooted in the 19th Century, WWII fully reflected the technological, political, and cultural trends of the century in which it took place. One of the most telling examples of this was the propaganda. The ministers, commissars, and admen who governments relied on to sell their war employed every modern technique they could to convince often skeptical populations that the carnage and destruction that filled their streets and newspapers was just, under control, and absolutely necessary. And while they increasingly turned to modern technological mediums like radio and television to transmit their messages, it was the propaganda poster that was the most effective tool of governments to inform, seduce, and cajole their populations. 10. 9. 8. 7. 6. 5. 4. 3. 2. 1. List by Geoff Shakespeare

20 Top Twitter Monitoring and Analytics Tools | pamorama - Flock [This post has been updated. See my most recent list of the 50 Top Tools for Social Media Monitoring, Analytics, and Management 2013.] By establishing a presence on the social Web, you can gain virtually unlimited exposure to your target audience without incurring the higher costs associated with traditional marketing campaigns. Here’s why Twitter is one of the best social media platforms for listening: Real-time results. There are many powerful social media tracking and analytics tools available that can monitor your performance on social media sites like Twitter. Twazzup: A dashboard program that monitors Twitter, Twazzup will tell you every time your keywords are mentioned in a tweet. TwitterGrader: Twitter Grader is a free tool that allows you to check the power of your Twitter profile. Twitscoop: Twitscoop is a real-time visualization tool which enables users to “mine the thought stream” provided by Twitter.

OH MY GOD WHAT HAPPENED AND WHAT SHOULD I DO? Free Professional PSD Template: BlueMasters - Smashing Magazine Advertisement In this post we release a yet another freebie: BlueMasters, a free PSD template, designed by Wendell Fernandes1 and released for Smashing Magazine and its readers. As usual, the theme is free to use in private and commerical projects. BlueMasters is a dark, sexy, custom theme that has a solid, professional look and a very simple structure. You can access all files and layers used in a well organized structure and naming convention, making it easier for slicing the template or modifying it. BlueMasters can be customized to fit your business brand as well as your clients’ websites. Download the theme for free! The theme is released for free. Template / Pages The templates set consists of 5 pages that provide multiple page template design options: HomeAbout UsPortfolioBlog PostsBlog Post SelectionContact “Home” page template “About Us” page template “Portfolio” page template “Blog” page template “Contact Us” page template Behind the design Thank you, Wendell. It's done.

10 Amazing Cold War Propaganda Posters - FrontMotion Firefox The Cold War lasted from the end of World War II right up to the early 1990s, although the Soviet Union and the USA never actually engaged in direct battle. Instead, the Cold War was expressed through weapons development (the nuclear arms race), technological development (the space race), espionage and propaganda. Western democratic states churned out huge amounts of propaganda material throughout the First and Second World Wars, but practically decommissioned their propaganda machines post 1945. This is why most of the posters that we explore below have emerged from the Soviet Union or independent political activist groups, and not the West. The posters in this article have not only been selected on the basis of their highly creative and original content, each one also conceals a message. 1. This poster, which appears on the front cover of David Crowley’s “Posters of the Cold War” book, depicts the USA and USSR, side-by-side, as identical Superman characters. 2. 3. 4. 5. 6. 7. 8. 9.