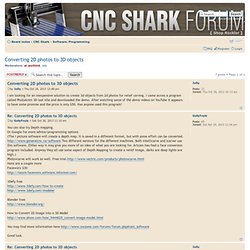 And Autodesk Fusion360. Sculptris provides an excellent gateway into the exciting world of 3D. It's features are easy to learn, even for someone with no experience in digital art, yet robust enough for creating base models that can then be refined in other applications, such as ZBrush. Autodesk Fusion360 free download. Lots of support forums for it. Here is Creo Elements/Direct Modeling Express 4.0 is a popular 3D CAD choice for leaders in product design who have short design cycles and frequent one-off designs. There is also Repg, for sd printers. I don't play around enough with the CAD stuff. If I recall correctly you can map an image onto a 3d model. GCode Analyzer. GCode Analyzer/Visualizer by hudbrog. Hey everbody, Wanted to show you a little project I've been working on for some time - As you might've guessed by the topic name - it's a GCode visualizer. 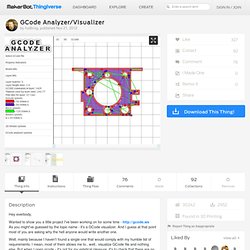 And I guess at that point most of you are asking why the hell anyone would write another one. Well, mainly because I haven't found a single one that would comply with my humble list of requirements. I mean, most of them allows me to.. well.. visualize GCode file and nothing else. But when I open gcode - it's not for my estetical pleasure, it's to check that there are no problems and to see effects that recent slicer configuration changes done or for any other of several reasons. 6) Totaly open source so you can use it as you like ) Update 27 Nov 2012: Lots of bug fixes, support for DC extruders (M101/M103), order of magnitude improvement in loading time for files with lots of Z movements (like Z-lifts) Update 28 January 2013 Lots of bugfixes.

There still significant issues with this version so I continue to suggest you use v3 unless you need centering or buggy slic3r support. Hey guys! This is a gcode viewer for makerbot (3D) and 5D gcode written in processing. It's open-source and still a work in progress so if you would like to help out feel free to look at the git: github.com/nmsl1993/ProcessingGcodeViewer. It supports viewing dualextrusion prints colored correctly. You should probably have a discrete gpu to use this; integrated graphics work but it'll be realllllly slow. Thanks: I realized this needed to be done while working at makerbot and listening to Ben Rockhold constantly bragging about pleasant3D (which is OSX-only and closed-source). Nmsl1993/ProcessingGcodeViewer. Gcode2vtk - a Makerbot/Reprap/Skeinforge gcode to vtk file converter. This program is able to convert your 3d printing gcode to the vtk file format. 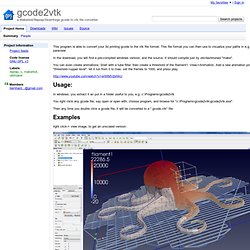 This file format you can then use to visualize your paths in e.g. paraview In the download, you will find a pre-compiled windows version, and the source. It should compile just by old-fashinoned "make". You can even create animations: Start with a tube filter, then create a threshold of the filament1. ParaView - Open Source Scientific Visualization. Pleasant Software - Pleasant3D. I frequently had the problem that downloaded STL files needed some minor editing in order to be printable on my MakerBot. Most of the time it was just a simple move to the center of the build platform or a resize. In addition to that, I already wrote OpenGL code to visualize STL and GCode files a couple of months ago for another larger project.

Finally I had sometimes the problem that I downloaded a ASCII encoded STL file and wanted to open the file in my 3D/CAD application. Since this application can only read binary STL files I needed an easy way to convert ASCII STL to binary STL. So I wrote Pleasant3D, a small utility which solves these problems and uses the above mentioned visualization code to display STL and GCode files: The “build platform” is fixed to 10×10cm (i.e.