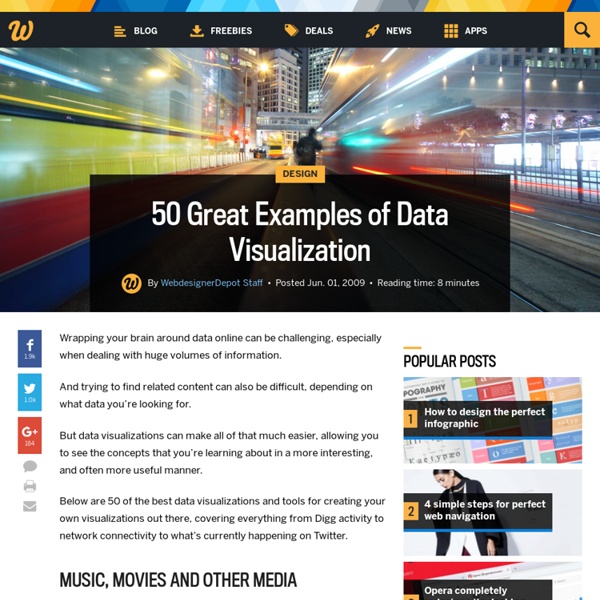 Wrapping your brain around data online can be challenging, especially when dealing with huge volumes of information. And trying to find related content can also be difficult, depending on what data you’re looking for. But data visualizations can make all of that much easier, allowing you to see the concepts that you’re learning about in a more interesting, and often more useful manner. Below are 50 of the best data visualizations and tools for creating your own visualizations out there, covering everything from Digg activity to network connectivity to what’s currently happening on Twitter. Music, Movies and Other Media Narratives 2.0 visualizes music. Liveplasma is a music and movie visualization app that aims to help you discover other musicians or movies you might enjoy. Tuneglue is another music visualization service. MusicMap is similar to TuneGlue in its interface, but seems slightly more intuitive. Digg, Twitter, Delicious, and Flickr Internet Visualizations

The Graphic Account: 1-16-13 Part of the beauty of working with data is how many interesting things you learn. For instance, this week we discovered that Fantine from Les Miz coughs more than any other character, Raiders of the Lost Ark looks a little like a Family Circus cartoon, and that Canada’s leaders are the most educated in the world. But that’s just the beginning. Take a peek below at this week’s roundup of all things data for the best in information design. Missed last week’s post? Get caught up here. Data Visualization and Infographics Examples and Resources Things wordy, geeky, and webby Since taking a class that discussed Edward Tufte‘s work, I’ve been fascinated by turning information into visual data. His site contains many examples that you could easily spend hours on the site.

InfoGraphic Designs: Overview, Examples and Best Practices Information graphics or infographics are visual representations of information, data or knowledge. These graphics are used where complex information needs to be explained quickly and clearly, such as in signs, maps, journalism, technical writing, and education. They are also used extensively as tools by computer scientists, mathematicians, and statisticians to ease the process of developing and communicating conceptual information. They can present a rich amount of information without intimidating you. Or sometimes they intimidate you, but make the digesting of the information much more bearable. Here in this article below, we are going to discuss best practices for designing infographics followed by some examples which might help you learn a thing or two.

10 significant visualisation developments: July to December 2012 To mark the milestone of each mid-year and end of year I try to take a reflective glance over the previous 6 months period in the data visualisation field and compile some of the most significant developments. These are the main projects, events, new sites, trends, personalities and general observations that have struck me as being important to help further the development of this field. Earlier this year I published this collection for the first 6 months of 2012 and now I’d like to mark the end of 2012 with my latest perspective. I look forward to hearing from you with suggestions for the developments you believe have been most significant. And so, as ever, in no particular order… 1.

40 Useful and Creative Infographics Six Revisions Menu Main Categories CSS HTML JavaScript Web Design WordPress Web Development Design Inspiration UX Design UI Design Why D3.js is So Great for Data Visualization When D3 came out in 2011, it became clear pretty quickly that it was going to be a powerful tool for creating data visualizations. But it’s certainly not the first — or only — tool. Why did it succeed when so many other libraries have failed? First of all, it works on the web. Data visualizations are only good if people see them, and there’s no better place to see them than on the internet, in your browser. Protovis was the first library to make any real headway in this direction, despite other libraries and services that tried.

Sketchnotes 101: The Basics of Visual Note-taking Welcome to the second article in the the new Core77 "Sketchnotes Channel" (www.core77.com/sketchnotes) where we'll be exploring the application of visual thinking tools in the worlds of design and creative thinking. So you say you're ready to start sketchnoting. Maybe you're not much of a sketcher but you take a lot of notes, and are interested in making them more meaningful and interesting, but you're afraid your drawings are too crude. For you, it's important to stress that sketchnotes—although they are inherently a visual medium—do not require drawing ability of any kind. The 83 best infographics Every picture tells a story, as they say, but sometimes it takes a clever combination of words and pictures to tell a story quickly, concisely and in an entertaining fashion. The best infographics may look like they were simple to create in Photoshop, but designing an effective piece of data visualization is usually anything but. There are several great tools to create infographics, but to these examples of infographics from around the web will show you how you can take it a step further and add a bit of style and personality to your data. A few of these are now several years out of date but they can still provide some inspiration for those of you looking to create an infographic from scratch.